Galaxy Triplet NGC 6769-71, an interacting triplet of galaxies in Pavo 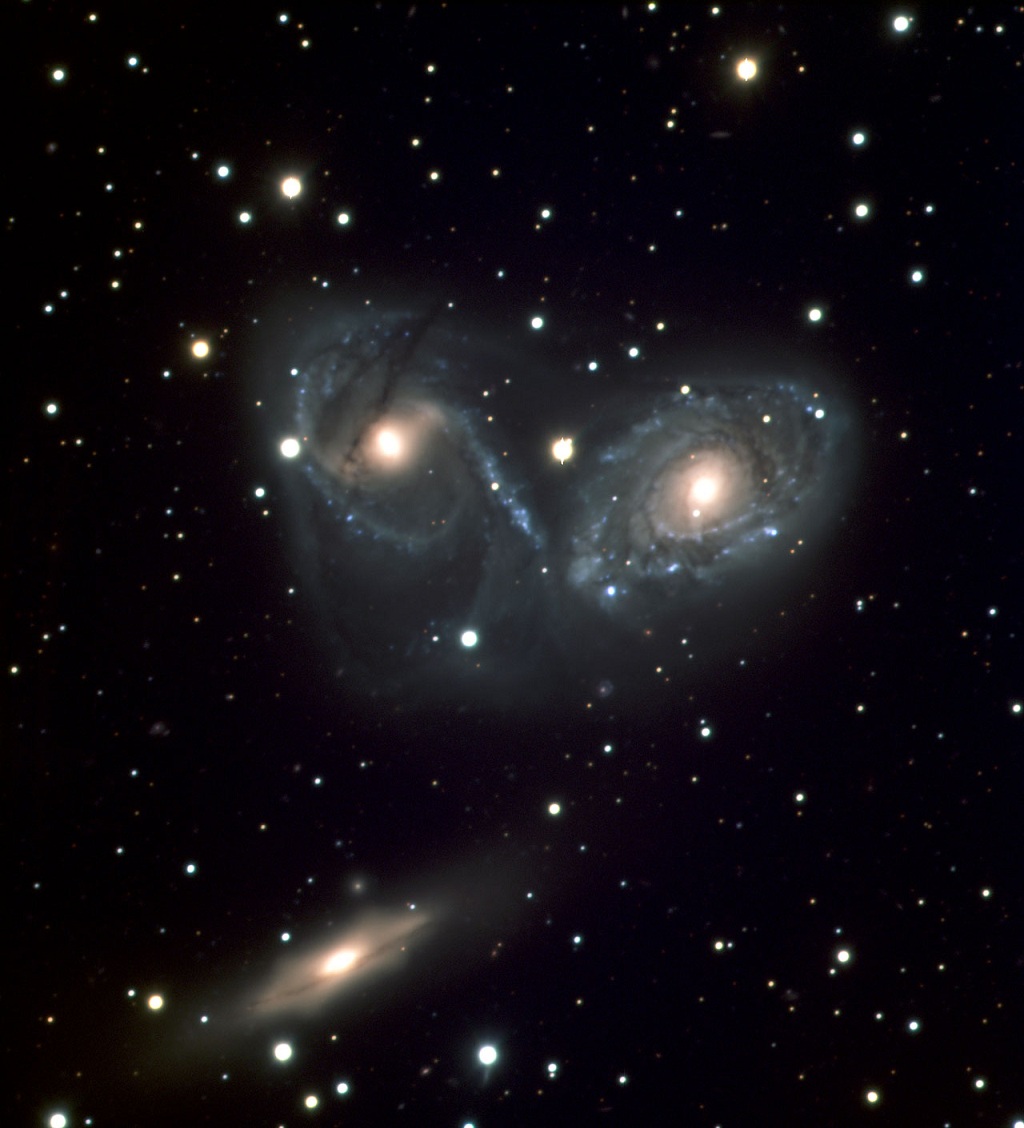 Galaxy Triplet NGC 6769-71 is a gravitational interacting triplet of galaxies, located about 190 million light years away in the southern constellation of Pavo (the Peacock).

Most galaxies are members of clusters of galaxies. In these, they move around among each other in a mostly slow and graceful ballet. But every now and then, two or more of the members may get too close for comfort – the movements become hectic, sometimes indeed dramatic, as when galaxies end up colliding. This image shows an example of such a cosmic tango.

As dramatic and destructive as this may seem, such an interaction event is also an enrichment, a true baby-star boom. A cosmic catastrophe like this one normally results in the formation of many new stars. This is obvious from the blueish nature of the spiral arms in NGC 6769 (upper right) and NGC 6770 (upper left) and the presence of many sites of star forming regions.

The two upper galaxies, NGC 6769 and NGC 6770 are of equal brightness and size, while NGC 6771 (below) is about half as bright and slightly smaller. All three galaxies possess a central bulge of similar brightness. They consist of elderly, reddish stars and that of NGC 6771 is remarkable for its “boxy” shape, a rare occurrence among galaxies.

All three galaxies are barred spiral galaxies: NGC 6769 with very tightly wound spiral arms, while NGC 6770 has two major spiral arms, one of which is rather straight and points towards the outer disk of NGC 6769. NGC 6770 is also peculiar in that it presents two comparatively straight dark lanes and a fainter arc that curves towards the third galaxy, NGC 6771.

Stars and gas have been stripped off NGC 6769 and NGC 6770, starting to form a common envelope around them, in the shape of a Devil’s Mask. There is also a weak hint of a tenuous bridge between NGC 6769 and NGC 6771. All of these features testify to strong gravitational interaction between the three galaxies. The warped appearance of the dust lane in NGC 6771 might also be interpreted as more evidence of interactions.

This colour-composite image was obtained on April 1, 2004, the day of the Fifth Anniversary of ESO’s Very Large Telescope. It was taken in the imaging mode of the VIsible Multi-Object Spectrograph on Melipal, one of the four 8.2-m Unit Telescopes of the VLT at the Paranal Observatory (Chile). North is up and East is left.

The text is partly taken from ESO.