News by Subject » Anne's Image of the Day » Anne’s Picture of the Day: Gas Cloud Hubble-X 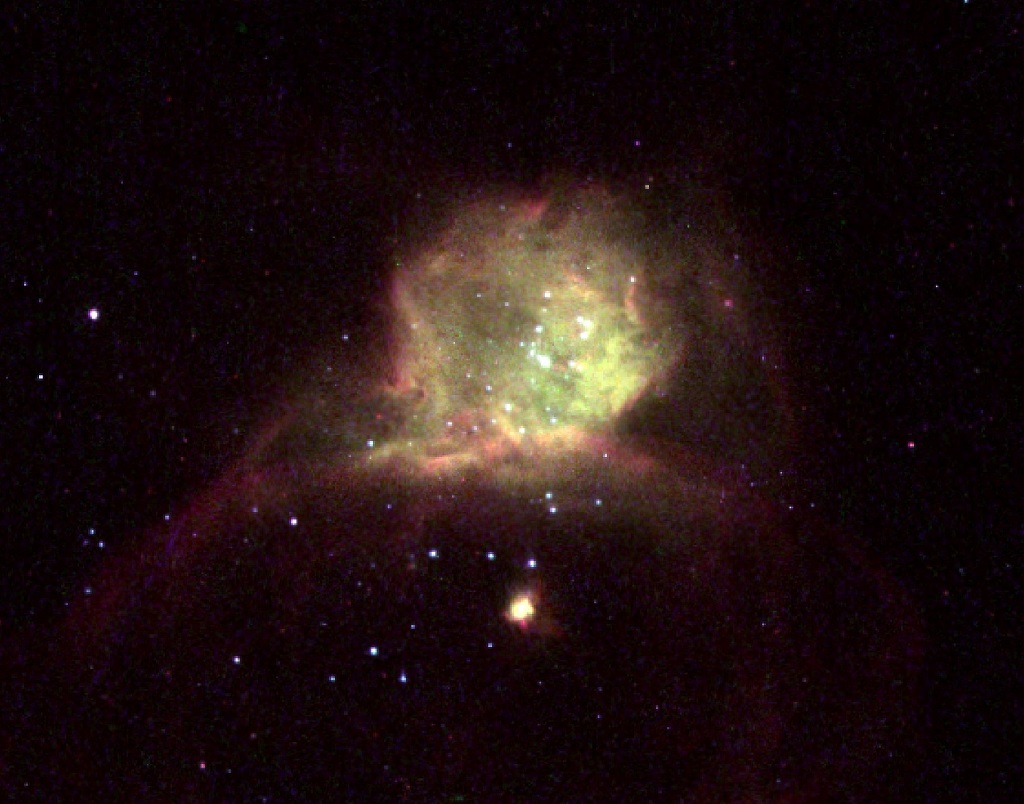 Hubble-X, a glowing gas cloud of about 110 light-years across, is one of the most active star-forming regions within one of the Milky Way’s closest neighbors: the barred irregular galaxy NGC 6822 (also known as Barnard’s Galaxy) which is located only 1,63 million light-years away from Earth in the constellation of Sagittarius (the Archer).

The name Hubble-X is derived from a catalog of objects in NGC 6822. The “X” is the Roman designation for the number 10.

This nearly circular bright cloud is the location of an intense burst of star formation which occurred about 4 million years ago. It contains many thousands of newly formed stars in a central cluster. In this image, the brightest of these young stars can easily be seen as numerous bright white dots.

Stars form in groups from enormous clouds of gas and dust called giant molecular clouds. Once star formation begins in a molecular cloud, its rate accelerates until the process is stopped when one or more very massive hot stars are formed. At that point the clouds change from near darkness into the brightly glowing objects such as seen in Hubble-X. It is the intense ultraviolet radiation from the massive stars that causes the residual gas to glow. Radiation and gas outflows, called stellar winds, then cause the gas to disperse, bringing further star formation to an abrupt end.

The small host galaxy, NGC 6822, is considered prototypical of the earliest fragmentary galaxies that inhabited the young Universe. Therefore is Hubble-X giving astronomers new insight into the fierce birth of stars as it may have more commonly happened in the early Universe.

Hubble-X is many times brighter and larger than the Orion Nebula, the brightest nearby star formation region in our own Milky Way galaxy. In fact, the tiny cloud just below Hubble-X has about the same size and brightness as the Orion Nebula.

This image was taken with Hubble’s Wide Field Planetary Camera 2 in September 1997, by astronomers C. Robert O’Dell of Vanderbilt University, Paul W. Hodge of the University of Washington, and R. C. Kennicutt, Jr. of Steward Observatory at the University of Arizona.