News by Subject » Anne's Image of the Day » Anne’s Picture of the Day: Globular Cluster Messier 107

Messier 107, a globular cluster in Ophiuchus 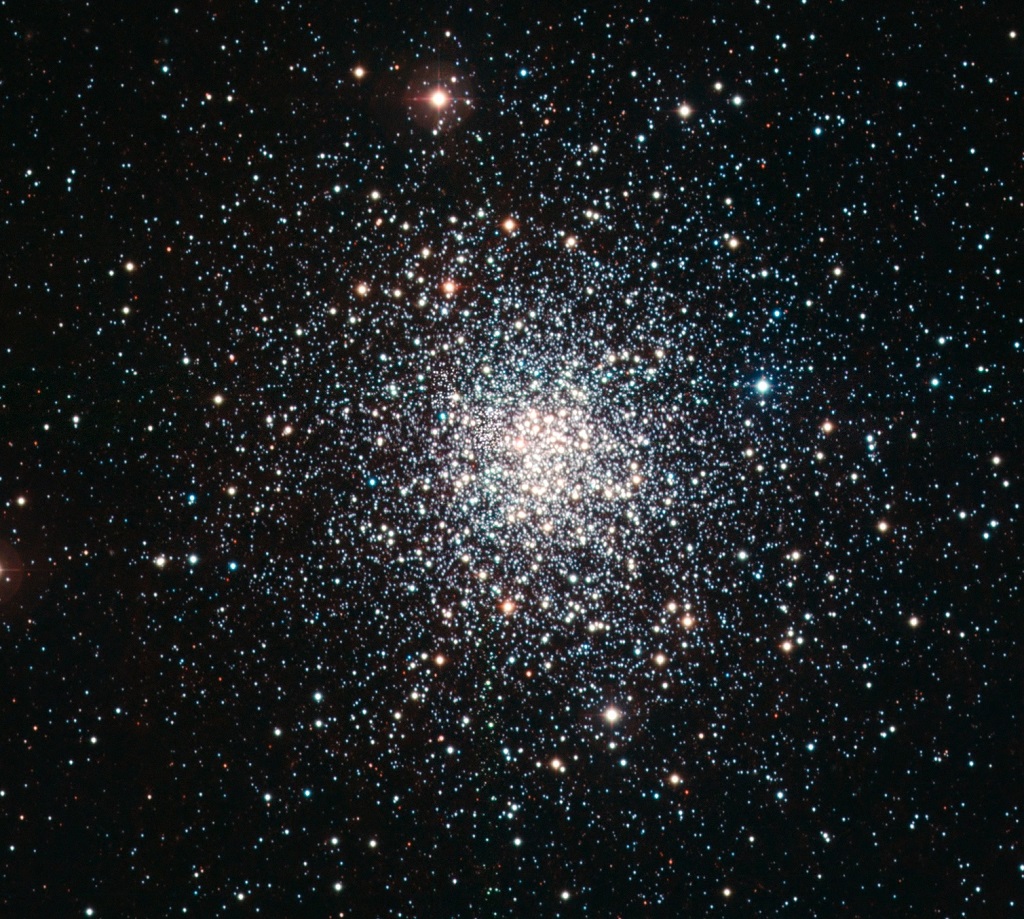 Messier 107 (also known as NGC 6171) is a globular cluster of roughly 80 light-years across located about 20,900 light-years from Earth, close to the galactic plane in the constellation of Ophiuchus (The Serpent Bearer). It is approaching us at approximately 147 kilometers per second.

This very loose globular cluster consists of a population of thousands of old stars, including 25 known variable stars and several blue stragglers. Many of the stars have already evolved into red giants (yellowish in this image) and white dwarfs – the last phases in a star’s life. The cluster also contains some dark obscured regions, which is unusual for globular clusters.

Messier 107 is one of the more than 150 globular clusters found around the disk of our galaxy. They are among the oldest objects in the Milky Way. Each of these spherical star collections contain hundreds of thousands of extremely old stars.

Because stars within a globular cluster are usually formed more than 10 billion years ago out of one interstellar cloud of dust and gas, they must all be relative small stars, because these little stars use up their hydrogen supply much slower than massive ones.

Globular clusters were formed when their progenitor galaxies were still very young, so studying these objects can provide significant insights into how galaxies, and their component stars evolve. This is especially so since the origin of these clusters is still hotly debated, as well as the exact influence that these structures have on the evolution of their host galaxies.

Roughly half of the Milky Way’s known globular clusters are found in the constellations of Sagittarius, Scorpius and Ophiuchus, in the general direction of the center of the Milky Way. This is because they are all in elongated orbits around the central region and are on average most likely to be seen in this direction.

Messier 107 is not visible to the naked eye. But, with an apparent magnitude of about eight, it can easily be observed from a dark site with binoculars or a small telescope.

This image was created from exposures taken through blue, green and near-infrared filters, using the Wide Field Imager on the MPG/ESO 2.2-meter telescope at La Silla Observatory, Chile.