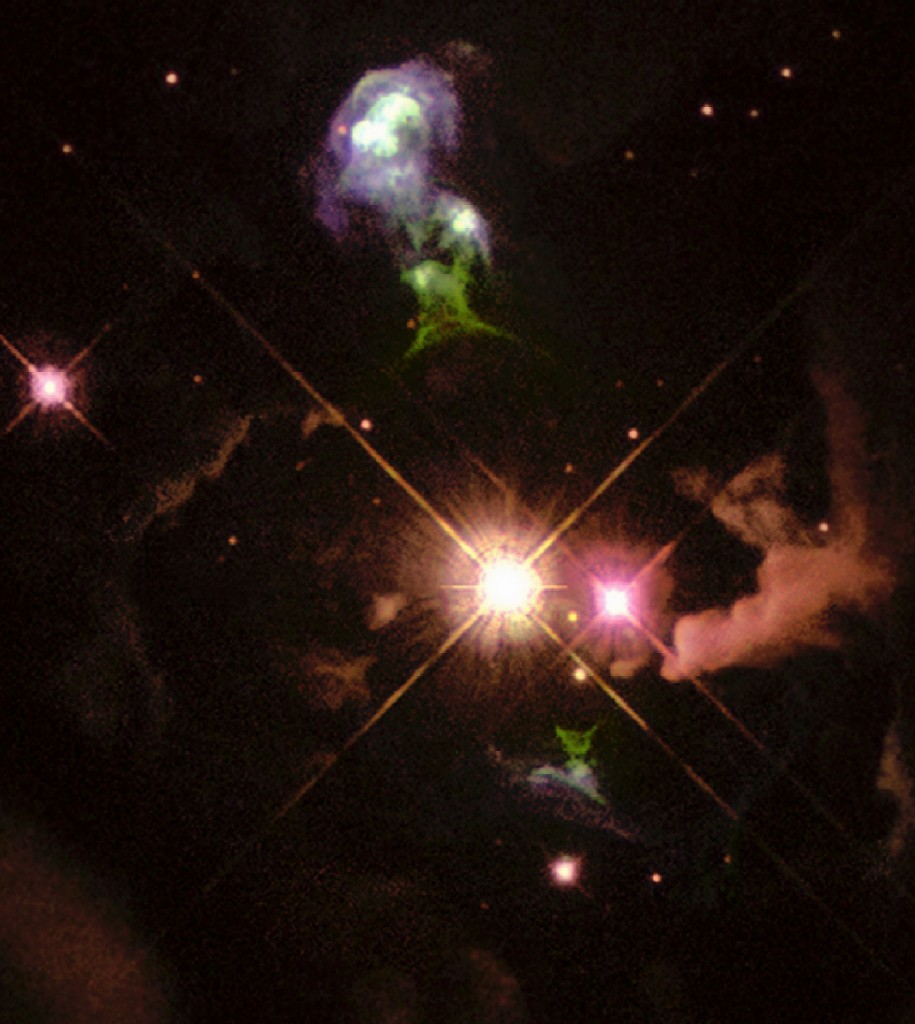 Herbig-Haro 32 (HH 32) is a bright Herbig–Haro object located some 960 light-years away in the constellation of Aquila.

A Herbig-Haro object is a small bright nebula in a star-forming region, created when jets of material — at speeds of several hundred kilometres per second — from a newborn star collide with the interstellar medium. The bipolar jets plow into the surrounding nebula, producing strong shock waves that heat the gas and cause it to glow in the light of hydrogen atoms (green) and sulfur ions (blue), several other atoms and ions, and sometimes radiation from the exciting star that is reflected by the surrounding gas (red).

This glow makes it a Herbig-Haro object, in honor of astronomers George Herbig and Guillermo Haro. However, many HH objects don’t show a clearly jet-like morphology and appear as systems of a few scattered, emitting knots. All known Herbig-Haro objects have been found within the boundaries of dark clouds and are strong sources of infrared.

They are transient phenomena, lasting not more than a few thousand years. They can evolve visibly over a few years, as parts of them fade while others brighten as they collide with clumpy material in the interstellar medium.

HH 32 is an excellent example of a Herbig-Haro object, although rather old. The intense wind of material blowing from the bright, young central star (called AS 353A) has already cleared much of the dust out of the central region, thus exposing the star to direct view.

We can still see interstellar gas and dust around the young star, and two oppositely directed jets coming from this star. The end of the optical jet is some 12,000 AU (12,000 times the distance between Earth end the Sun) from the central star. The total length of the bipolar outflow is about 0.54 light-years.

The jet on the top side, whose furthest extent is about 0.2 light-year from the star, is pointed more nearly in our direction, while the opposite jet on the bottom lies on the far side of the star and is fainter either because it is partially obscured by dust surrounding the star or because there is much less material in front of the star.