News by Subject » Anne's Image of the Day » Anne’s Picture of the Day: Hickson Compact Group 7

HCG 7, a small group of galaxies in Cetus 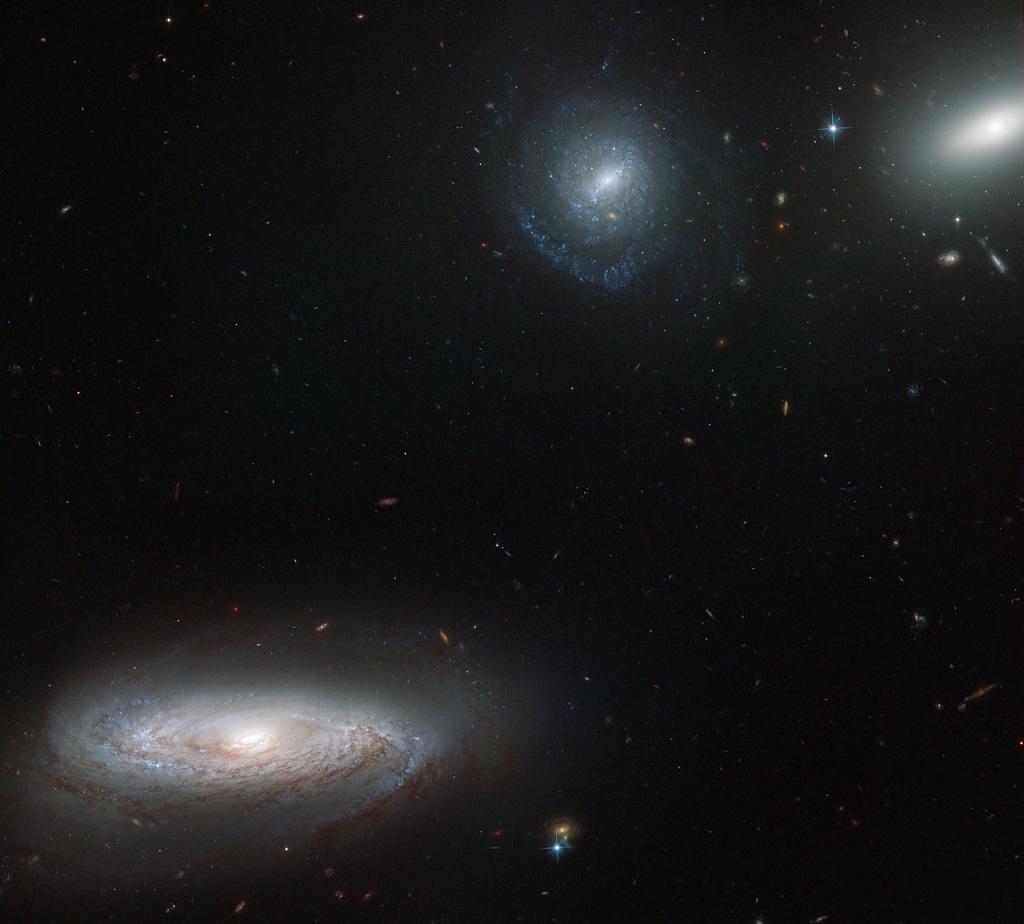 Hickson Compact Group 7, or HCG 7 for short, is a small group of galaxies consisting of 3 spiral galaxies and 1 elongated lenticular (lens-shaped) galaxy in close proximity and which are weakly gravitationally bound. They lie about 180 million light-years away from Earth in the equatorial constellation of Cetus.

The 3 spiral galaxies are: NGC 192, the one that dominates the foreground; NGC 196 the one on the top right; and NGC 201 which is outside this image. The lenticular galaxy NGC 197 is the bright blue one in the middle. NGC 196 shows some merger activity and has probably experienced a closer encounter with NGC 197.

Compact groups are relatively short lived entities that form via mergers of galaxies within loose subsystems and groupings. Simulations predict that merging of the group members should proceed rapidly within one billion years. Hickson groups are therefore snapshots at various stages in this merging process. Astronomers believe they may represent an intermediate stage between loose groups and individual galaxies. A better understanding of the nature of HCGs could help explain galaxy formation on a larger scale in the early Universe. Compact groups are surprisingly numerous, and may play a significant role in galaxy evolution.

Observing tightly-knit galaxy groups like HCG 7 is important because they evolve in a different way from their more spaced-out counterparts in less crowded regions of the Universe.

A recent study has charted 300 hundred young massive clusters and 150 globular clusters in HCG 7, and their ages and distributions measured. The young massive clusters were mostly located in the three spiral galaxies, while the lenticular features a large population of globular clusters. The age distributions suggest that the rate of star formation has been fairly steady through time, although quite high in the central regions.

Additional studies, including searches for material between the galaxies, hint that the stars in the HCG 7 galaxies formed by converting their gas without any gravitational influences caused by merging with other galaxies. This is puzzling, as the galaxies are depleting their supplies of gas at a rate that suggests that they have merged in the past.

This raises the question of whether the group really has evolved serenely, or if there are mysterious processes at work that are yet to be understood. The currently known information is contradictory and an encouragement for further studies to discover the real story behind HCG 7.

This image of a part of the Hickson Compact Group 7 with many more distant galaxies peppering the background, was taken with the Wide Field Channel of the Advanced Camera for Surveys on the Hubble Space Telescope using three different color filters.