News by Subject » Anne's Image of the Day » Anne’s Picture of the Day: Interacting Galaxies NGC 3169/66 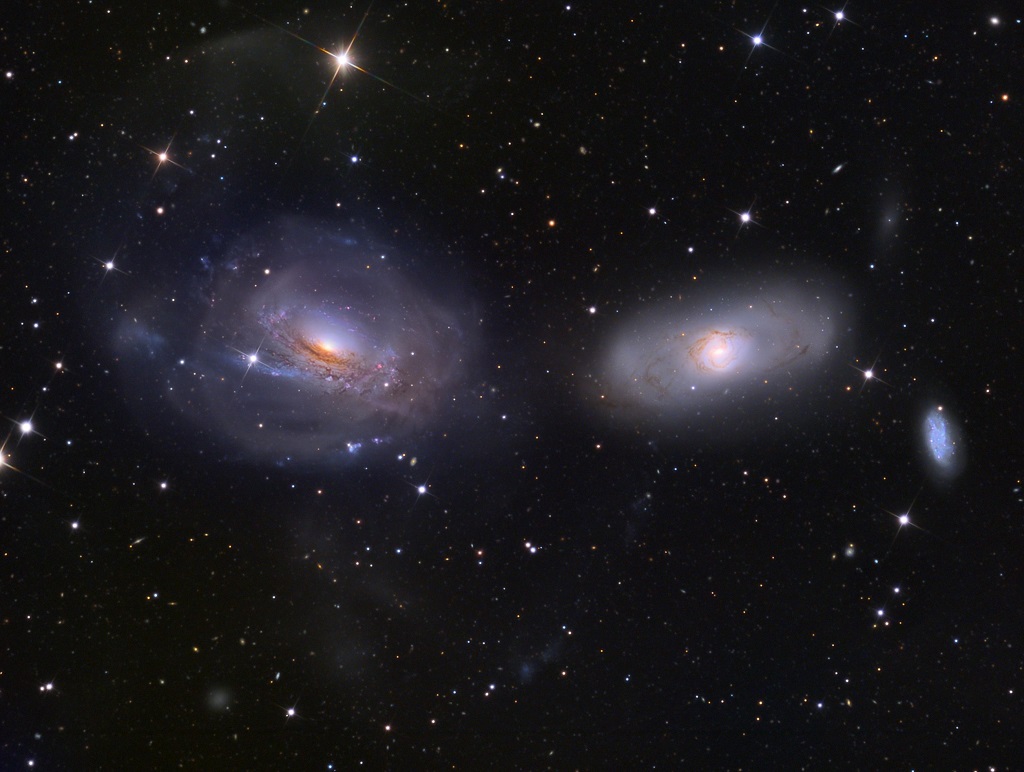 NGC 3169 (left) and NGC 3166 (right) are two interacting spiral galaxies, located some 70 – 75 million light-years away in the constellation of Sextans (the Sextant). The picture spans about 400,000 light-years at the group’s estimated distance. The distance between the galaxies is about 160,000 light-years. Combined with NGC 3165, the small and dim spiral galaxy at the bottom-right of the pair, they form the NGC 3166 group of galaxies within the larger Leo 1 group.

NGC 3169 is an unbarred spiral galaxy with tightly-wound arms, including an asymmetrical one, that are shining bright with big, young, blue stars. It has a small bright nucleus (an active galactic nucleus that likely harbours a supermassive black hole) and multiple dust lanes that appear in silhouette against the large central bulge. There is an extended halo around the galaxy.

A supernova is a phenomenon in which a star explodes in the final phase of its life. There are two types: Type I and Type II. The Type I does not show hydrogen in the spectra, while Type II supernovae do show hydrogen in their spectra. Type II, are explosions of massive stars (initially more than 8 times the mass of the Sun).

The Type I category is sub-divided into Type Ia, Type Ib and Type Ic supernovae. Among these, Type Ia are explosions of white dwarf stars., while Types Ib and Ic supernovae are caused by the core collapse of massive stars. Compared to Type Ib, Type Ic supernovae have lost more of their initial envelope, including most of their helium.

NGC 3166 is a barred spiral galaxy with a very small, very bright nucleus in a short smooth bar, and unlike its bluer counterpart, it is not forming many new stars. It shows a large very faint extended envelope. In 2012 the Type Ic supernova SN 2012cw was discovered in this galaxy.

These adjacent galaxies are demonstrating that each member of the duo is close enough to feel the distorting gravitational influence of the other. As these two galaxies begin to merge, they are starting to be pulled apart. The faint wisps surrounding NGC 3169 are its outer spiral arms being pulled off, and lots of luminous gas has been drawn out from its disk. The gravitational tug of war has also fragmented the dust lanes in its companion NGC 3166.

The three galaxies are embedded within an extended ring of neutral hydrogen that is centered on NGC 3169. Eventually the galaxies will merge to form a single galaxy.