NGC 5253, an irregular galaxy in Centaurus 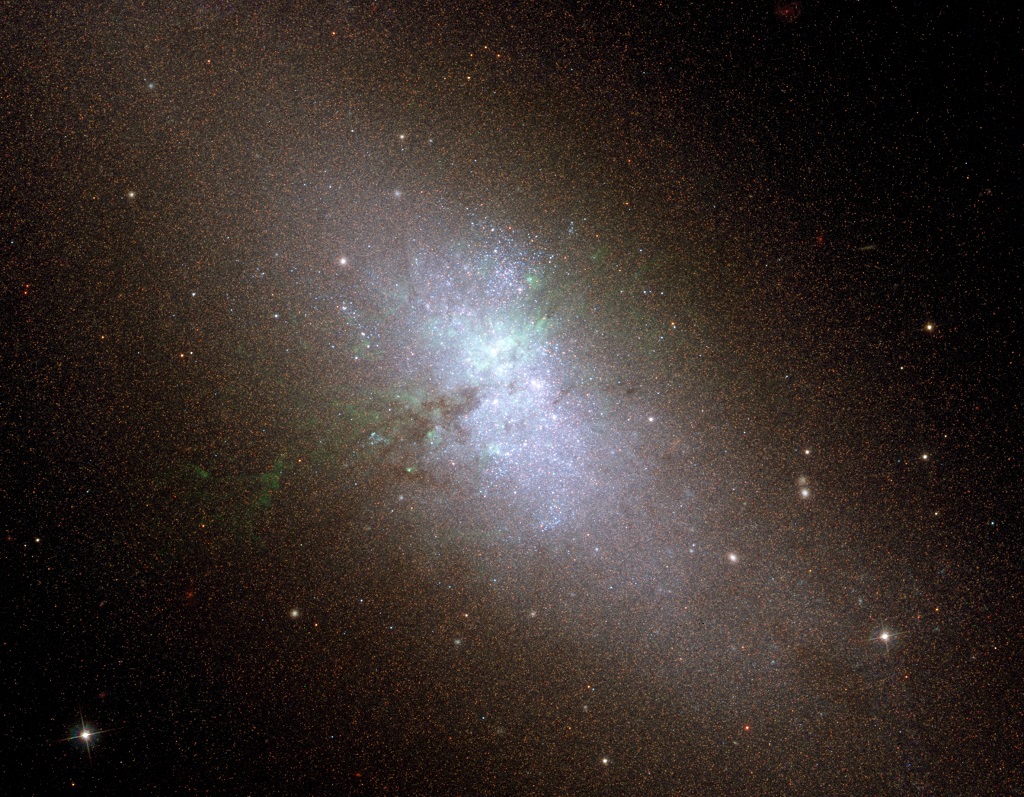 NGC 5253 is a small irregular galaxy – almost 100 times smaller than our own Milky Way galaxy – which is considered a dwarf starburst galaxy. It is located some 12 million light-years away from Earth in the southern constellation of Centaurus, while it is receding from us at approximately 407 kilometers per second.

It is a member of the M83 Subgroup of galaxies, which includes the spiral galaxy Messier 83 (the Southern Pinwheel Galaxy). The peculiar nature of NGC 5253 is possibly the result from a close encounter with this close neighbor.

NGC 5253 is one of the nearest of the known Blue Compact Dwarf (BCD) galaxies. The most characteristic signature of such galaxies is inclusion of very active star-formation regions. This is in spite of their low dust content and comparative lack of elements heavier than hydrogen and helium, which are typically the basic ingredients for star formation.

These galaxies contain molecular clouds that are quite similar to the pristine clouds that formed the first stars in the early Universe, which were devoid of dust and heavier elements. Hence, Blue Dwarf Galaxies possibly provide nearby and contemporary examples of what may have occurred in the early Universe during the primordial star-forming process.

NGC 5253 does contain some dust and heavier elements, but significantly less than our Milky Way galaxy. Its central regions are dominated by an intense star forming region that is embedded in an elliptical main body. The central starburst zone consists of a rich environment of hot, young stars concentrated in star clusters, which glow in blue in the image. Traces of the starburst itself can be seen as a faint and diffuse glow produced by the ionized oxygen gas.

A major dust lane is visible at the western (left) side of the galaxy, but patches of dust are visible all over. The different color shades are indicative of the ages of the stars and stellar clusters and the degree of obscuration by interstellar dust. Infrared images penetrate the dust clouds much better than optical images, and some deeply embedded objects that are not detected in optical images therefore appear this combined image.

Measuring the size and infrared brightness of each of these “hidden” objects, the astronomers were able to distinguish stars from stellar clusters; they count no less than 115 clusters. It was also possible to derive their ages – about 50 of them are very young in astronomical terms, less than 20 million years.

The most massive of these clusters holds about one million solar masses and shines as much as 5000 very bright massive stars. It is very young (a few million years), still embedded in a dense and heavy dust cloud (more than 100,000 solar masses of dust).

The distribution of the masses of the cluster stars resembles that observed in clusters in other starburst galaxies, but the large number of young clusters and stars is extraordinary in a galaxy as small as NGC 5253.

In May 1972, a Type Ia supernova – a result from the violent explosion of a white dwarf star – called SN 1972E has been observed in NGC 5253. It was the second brightest supernova (visual magnitude of 8.5) visible from Earth in the 20th century (after SN 1987A). It was found as a part of an organized survey for supernovae at Palomar that photographed thirteen of them in 1972, with the old technique of photographing the sky and comparing the new images with older ones taken years before.

This image was taken on June 12, 2010 with the Hubble’s Advanced Camera for Surveys, combining visible and infrared exposures. A version of this image was entered into the Hubble’s Hidden Treasures image processing competition by contestant Nikolaus Sulzenauer.