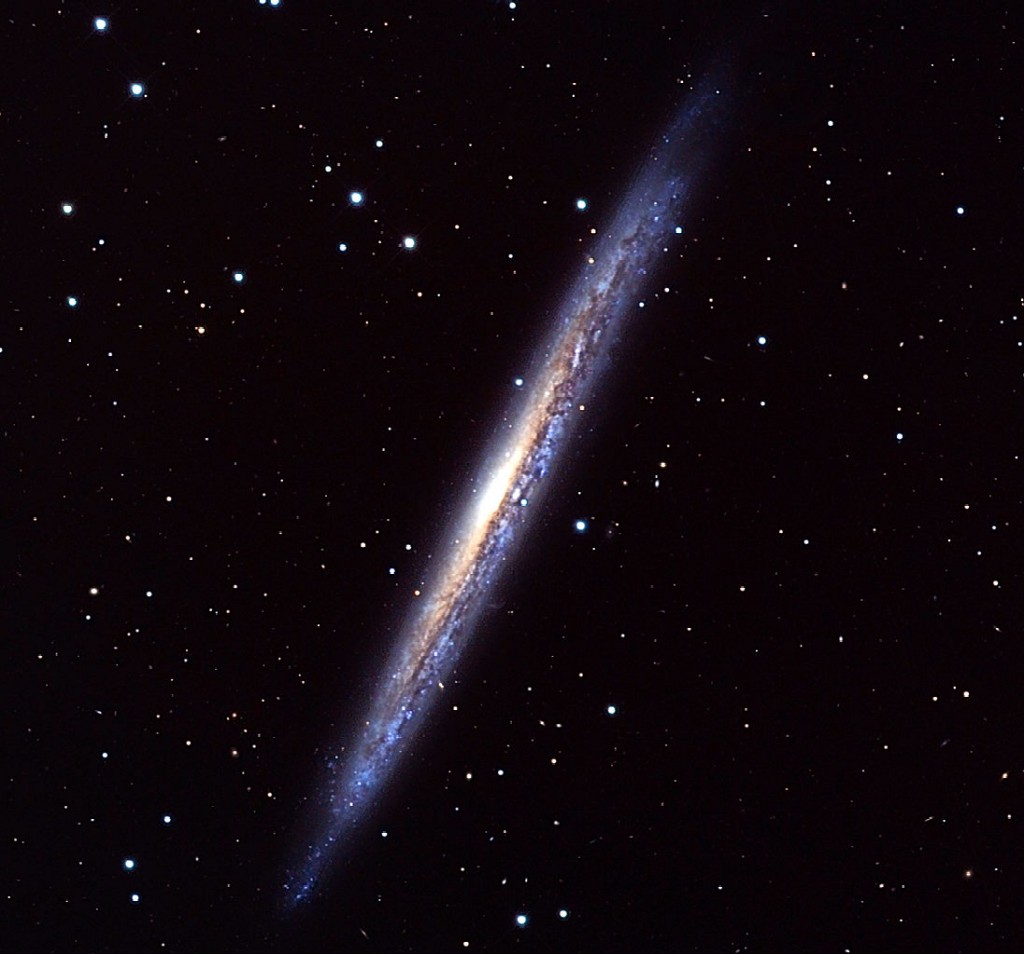 This image has been obtained from the Wikimedia Commons.

NGC 5907 (nicknamed Splinter Galaxy, Draco’s Needle and The Knife Edge) is a warped spiral galaxy of about 150,000 light-years across, located some 53.5 million light years away in the northern constellation of Draco, while it is moving away from us at approximately 667 kilometers per second. It is a member of the NGC 5866 Group of galaxies.

This galaxy is seen almost perfectly edge-on from our line of sight. We see a very flat disk, laced with dark dust lanes, that appears extraordinarily elongated.

NGC 5907 has an anomalously low metallicity, meaning that it has very few chemical elements other than hydrogen and helium. It contains few detectable giant stars, being apparently composed almost entirely of dwarf stars. In 1940, a supernova exploded in this galaxy, designated SN 1940A.

NGC 5907 has long been considered a prototypical example of a warped spiral in relative isolation. Then in 2006, an international team of astronomers announced the presence of extended tidal streams of stars surrounding the galaxy what may be the cause for the warp. But, even though NGC 5907 is a member of a galactic group, there are no galaxies near enough to it to be causing an interaction which could account for its streamers of stars.

The arcing tidal streams form tenuous loops (which are not seen in this image) extending more than 150,000 light-years from the narrow, edge-on galaxy. Recorded only in very deep exposures, these streams were likely formed when two galaxies collided.

Previously, researchers had thought that the stellar swirls were formed when a smaller galaxy hit a larger one, but a new study shows that this would have been impossible. In order to produce the observed streams, two roughly equally-sized galaxies crashed into each other 8 or 9 billion years ago. Simulations also showed that the galaxies must have been rich in gas in order to produce the swirls.

The Milky Way is heading for a crash into Andromeda in 4.5 billion years, and the resulting galaxy could have a similar shape. Most large spiral galaxies are thought to have formed in a similar process.

This image is created using the 24 inch telescope on Mt. Lemmon, AZ.