News by Subject » Anne's Image of the Day » Anne’s Picture of the Day: Protoplanetary Nebula Henize 3-1475

Henize 3-1475, a protoplanetary nebula in Sagittarius 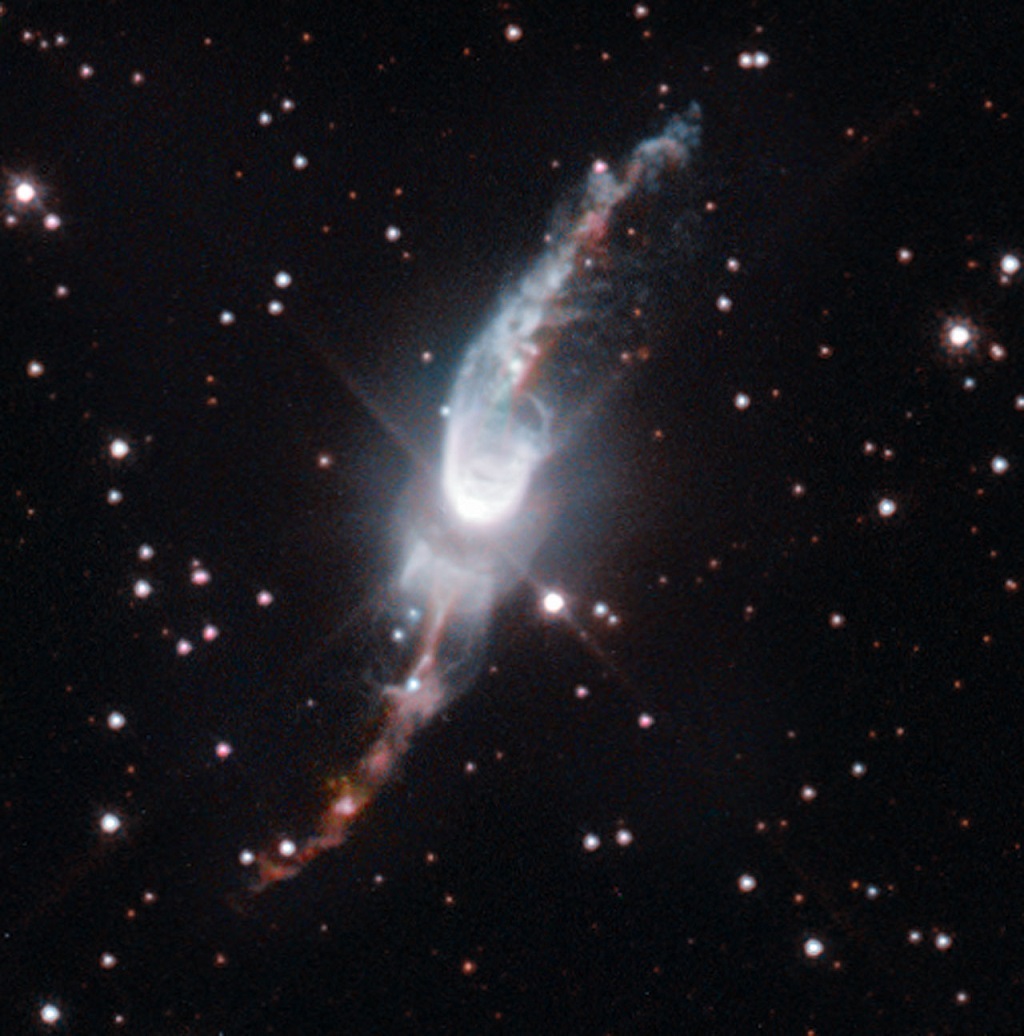 Henize 3-1475 (Hen 3-1475 for short, and also known as IRAS 17423-1755) is a bipolar protoplanetary nebula located around 18,000 light-years away from Earth in the constellation of Sagittarius (the Archer). The nebula – nicknamed the Garden-sprinkler Nebula – is named after Karl Gordon Henize, who has cataloged it in 1976.

Despite their name, protoplanetary nebulae have nothing to do with planets: they are clouds of dust and gas formed from material shed by an aging central star similar in mass to our Sun. For such a star death is a long process. After billions of years, the hydrogen fuel that powers the star begins to run out. The star balloons to great size and becomes a red giant. Eventually, however, the star collapses back on itself. This increases the temperature at its core and most of the stars material is catapulted into space, enveloping itself in expanding clouds of gas, but the core is not yet hot enough to make the gas itself glow on its own. Instead, the gas is merely reflecting the light from the star.

But as the star continues to evolve, it becomes hot enough to emit strong ultraviolet light. At that point it will have the power needed to make the gas glow, and will become a real full-fledged planetary nebula (hence the name protoplanetary, or preplanetary nebula). But before the nebula begins to shine, fierce winds of material ejected from the star will continue to shape the surrounding gas into intricate patterns. Then the star cools down and all that is left after this process is the exposed, hot and dead core, known as a white dwarf.

Hen 3-1475 is a great example of a protoplanetary nebula. Since its central star – which is more than 12,000 times as luminous as our Sun and weighs three to five times as much – has not yet blown away its complete shell, the star is not hot enough to ionize the shell of gas and so the nebula does not shine. Rather, we see the expelled gas thanks to light reflected off it. When the star’s envelope is fully ejected, it will begin to glow and become a planetary nebula.

The most characteristic feature of Hen 3-1475 is a thick ring of dust around the central star and two S-shaped jets with a series of knots (which shine brightly in X-ray images) that are emerging from the pole regions of the central star. These jets are long outflows of fast-moving gas. With a velocity of around 4 million kilometers per hour, the jets are the fastest discovered until now.

Recent studies suggest that Hen 3-1475’s characteristic S-shape and the large velocity outflow is created by the central star that ejects streams of gas in opposite directions and precesses once every thousand years. (Precession means a change in the orientation of the rotational axis of a rotating body.) It is like an enormous, slowly rotating garden sprinkler in the middle of the sky. No wonder astronomers also have nicknamed this object the “Garden-sprinkler Nebula.”

The outflow, however, is not smooth, but rather episodic with an interval of about 100 years, creating clumps of gas moving away at velocities up to 4 million kilometers per hour. The reason for these intermittent ejections of gas is not known. It may be due to either cyclic magnetic processes in the central star (similar to the Sun’s 22-year magnetic cycle), or to interactions with a companion star.

A protoplanetary nebula is a relatively short-lived phenomenon, what means there are relatively few of them in existence at any one time. Moreover, they are very dim, requiring powerful telescopes to be seen. This combination of rarity and faintness means they were only discovered comparatively recently. Finding one is a rare opportunity for astronomers to learn more about them and to observe the beginning of the formation of planetary nebulae.