News by Subject » Anne's Image of the Day » Anne’s Picture of the Day: Spiral Galaxy NGC 2403

NGC 2403, a spiral galaxy in Camelopardalis 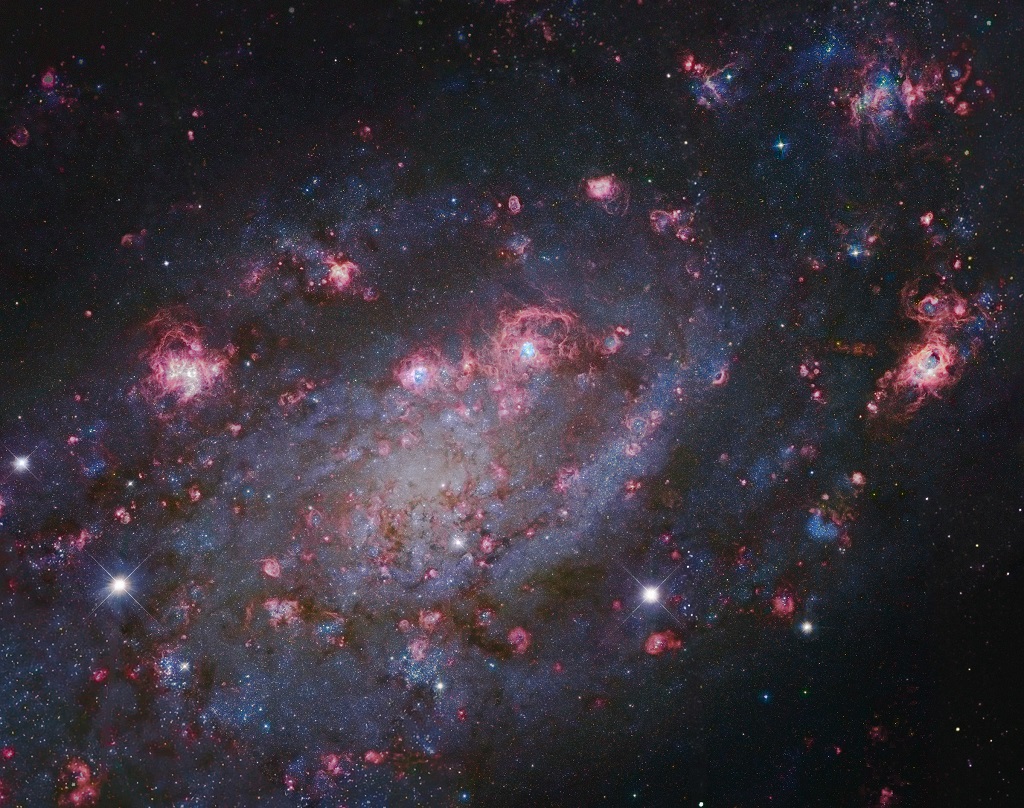 NGC 2403 is an intermediate spiral galaxy of some 50,000 light years across, located about 10.4 million light-years away from Earth in the northern constellation of Camelopardalis (the Giraffe), while it is receding from us at approximately 131 kilometers per second. It is an outlying member of the M81 Group.

The brightest part of this galaxy is the core and the sweeping spiral arms are slightly fainter. These spiral arms are dotted with star-forming H II regions, marked by the reddish glow of atomic hydrogen gas, some of which are very large and are known as giant H II regions. In fact, the most luminous and extended of all the giant HII regions in NGC 2403 covers an area 2,000 light-years across, almost 50 Orion Nebulas! Also visible in the galaxy are numerous blue open star clusters, dark dust lanes, and a bright but relatively small central nucleus. The northern spiral arm connects it to nearby galaxy NGC 2404.

There have been three (probably all Type II) supernovae in the galaxy: SN 1954J, which attained a magnitude of 16.3 at its brightest, SN 2002kg, which reached a maximum brightness of only 9.6, and SN 2004dj, the closest and brightest supernova since SN 1987A at the time of its discovery.

SN 2004dj was discovered on July 31, 2004, when its apparent brightness was 11.2 visual magnitude (the light of 200 million Suns); the discovery occurred after the supernova had reached its peak magnitude. The supernova’s progenitor is a star within a young, compact cluster of massive, generally blue (but some red) stars called Sandage 96. The progenitor star is therefore also commonly referred to as Sandage 96. This supernova is seen here as the spiky, bright “star” at the left edge of the field.

A supernova occurs when a star explodes in the final phase of its life. The exploding star can become billions of times as bright as the Sun before gradually fading from view. At its maximum brightness, the exploded star may outshine an entire galaxy. They are enriching the intergalactic gas with heavy chemical elements like oxygen, iron and silicon, necessary to build new generations of stars and planets, and to create life.

A Type II supernova results from the rapid collapse and violent explosion of a massive star. Such a star must have at least 8 times, and no more than 40–50 times the mass of the Sun. It is distinguished from other types of supernova by the presence of hydrogen in its spectrum. Type II supernovae are mainly observed in the spiral arms of galaxies and in star-forming regions, but not in elliptical galaxies.

This close-up is a composite image of space and ground-based data from the Hubble Legacy Archive and Japan’s 8.2 meter Subaru Telescope located on Mauna Kea, Hawaii.