News by Subject » Anne's Image of the Day » Anne’s Picture of the Day: Spiral Galaxy NGC 4402 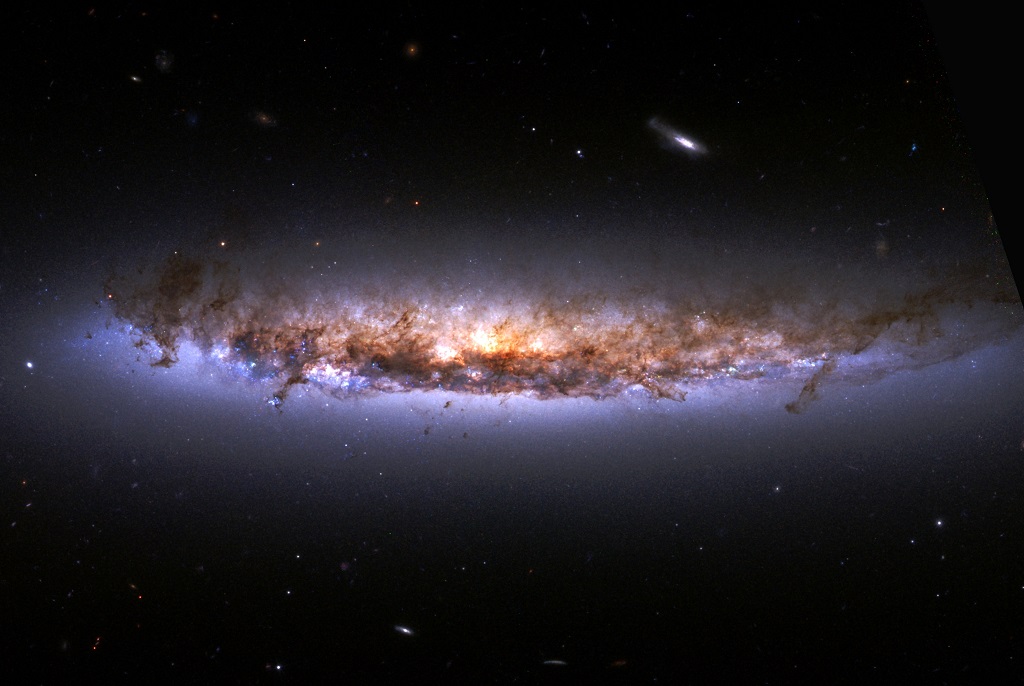 NGC 4402 is an edge-on spiral galaxy of about 55 thousand light-years across, located some 55 million light-years away from Earth in the constellation of Virgo, while it is receding from us at approximately 232 kilometers per second. It is a member of the relatively nearby Virgo Cluster of galaxies. In 1976 the supernova SN 1976B was observed in this galaxy.

This image shows striking visual evidence for a galaxy being stripped bare of its star-forming material by its violent ongoing encounter with the hot gas in the center of a galaxy cluster.

An extremely hot X-ray-emitting gas known as the intra-cluster medium lurks between galaxies within clusters. As the galaxy moves toward the center of the cluster (located out of the image toward the bottom left), it experiences a “wind” from the hot intra-cluster medium, which can reach temperatures of millions of degrees. This hot wind strips out the much cooler gas and dust in the galaxy, the material for new stars, and once this gas is stripped, the galaxy can no longer form new stars and becomes ‘dead’.

There are at least four key lines of evidence for declaring that this so called “ram-pressure stripping” process is cleaning out this galaxy:

This extremely disruptive ram pressure stripping process is believed to be a major influence on the evolution of galaxies and their star-forming ability over time, especially in very dense regions of the Universe like galaxy clusters.

But, the filaments of NGC 4402 are also being stripped away by the hot galaxy cluster wind. This strips away the outer layers of the clouds; the dust from these layers is then pushed away. In one case (the eastern or leftmost filament), we can see that the wind has either triggered star formation toward the tip of one of these dense clumps or exposed an already-existing star forming region.

The bright blue clusters of young stars in the bottom left region of the galaxy’s disk is further evidence of recently triggered star formation.

This image was taken with the Advanced Camera for Surveys on the Hubble Space Telescope using optical and infrared filters.
The text has been partially obtained of the National Optical Astronomy Observatory/Association of Universities for Research in Astronomy (NOAO/AURA)