News by Subject » Anne's Image of the Day » Anne’s Picture of the Day: Spiral Galaxy NGC 4911 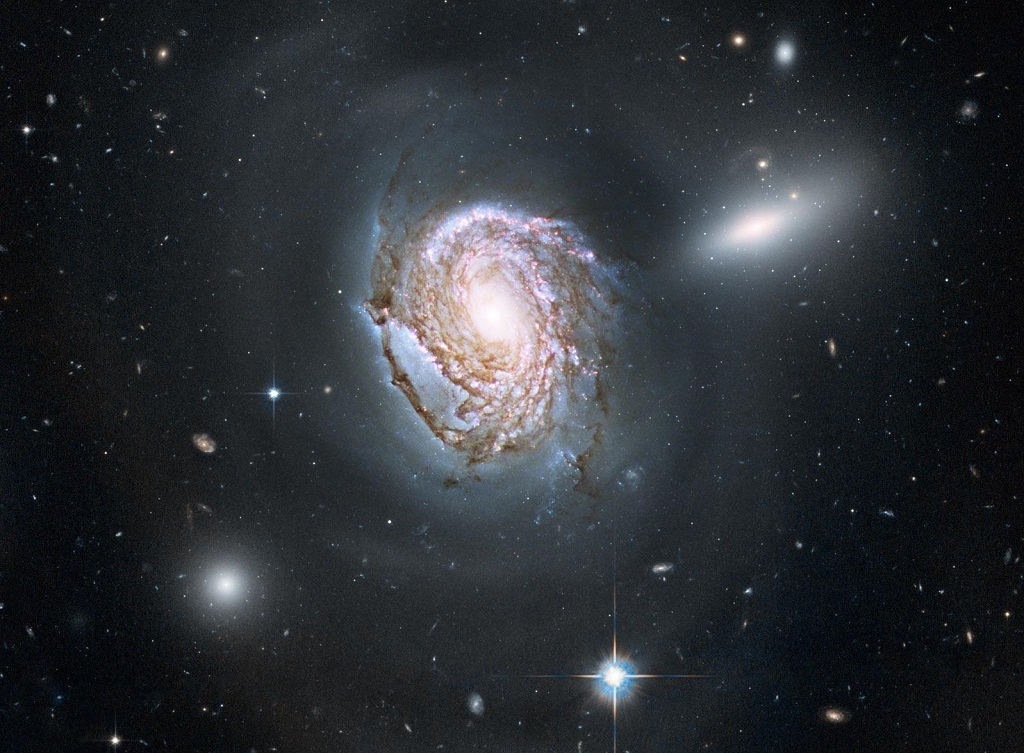 NGC 4911 (also known as UGC 8128) is a barred spiral galaxy of roughly 110 light-years across, located about 320 million light-years away in the northern constellation of Coma Berenices (Berenice’s Hair), while it is speeding away from us at approximately 7985 kilometers per second. Although it is quite rare for a spiral galaxy to be situated at the heart of a cluster of galaxies, NGC 4911 lies deep within the Coma Cluster.

This face-on galaxy contains a bright nucleus and rich dust lanes, silhouetted against glowing young star clusters and pink clouds of hydrogen, which indicates ongoing star formation. NGC 4911’s spiral arms, in particular the unusual faint outer ones, are being pulled and distorted by the gravitational forces from NGC 4911A (also known as PGC 83751), a companion lenticular galaxy seen to the upper right. The stripped material will eventually be dispersed throughout the core of the Coma Cluster, where it will fuel the intergalactic populations of stars and star clusters.

The Coma Cluster is home to more than 1,000 identified galaxies, making it one of the densest collections of galaxies in the nearby Universe. It continues to transform galaxies, due to the close encounters of galaxies within the cluster. Vigorous star formation is triggered in such collisions.

Galaxies in this cluster are so densely packed that they undergo frequent interactions and collisions. When galaxies of nearly equal masses merge, they form elliptical galaxies. Merging is more likely to occur in the center of the cluster where the density of galaxies is higher, giving rise to more elliptical galaxies.

So, if NGC 4911 ends up like most of the galaxies in the central Coma cluster, it will become a yellowish elliptical galaxy, losing not only its outer layers, but dust, gas, and its cadre of surrounding satellite galaxies as well. Currently, however, this process is just beginning.

This natural-color Hubble image, which combines data obtained in 2006, 2007, and 2009 from the Wide Field Planetary Camera 2 and the Advanced Camera for Surveys on the Hubble Space Telescope, required 28 hours of exposure time. Hubble has also captured some of the other galaxies within the cluster along with thousands of unassociated galaxies in the far distance, some even through NGC 4911.