News by Subject » Anne's Image of the Day » Anne’s Picture of the Day: Spiral Galaxy NGC 6872 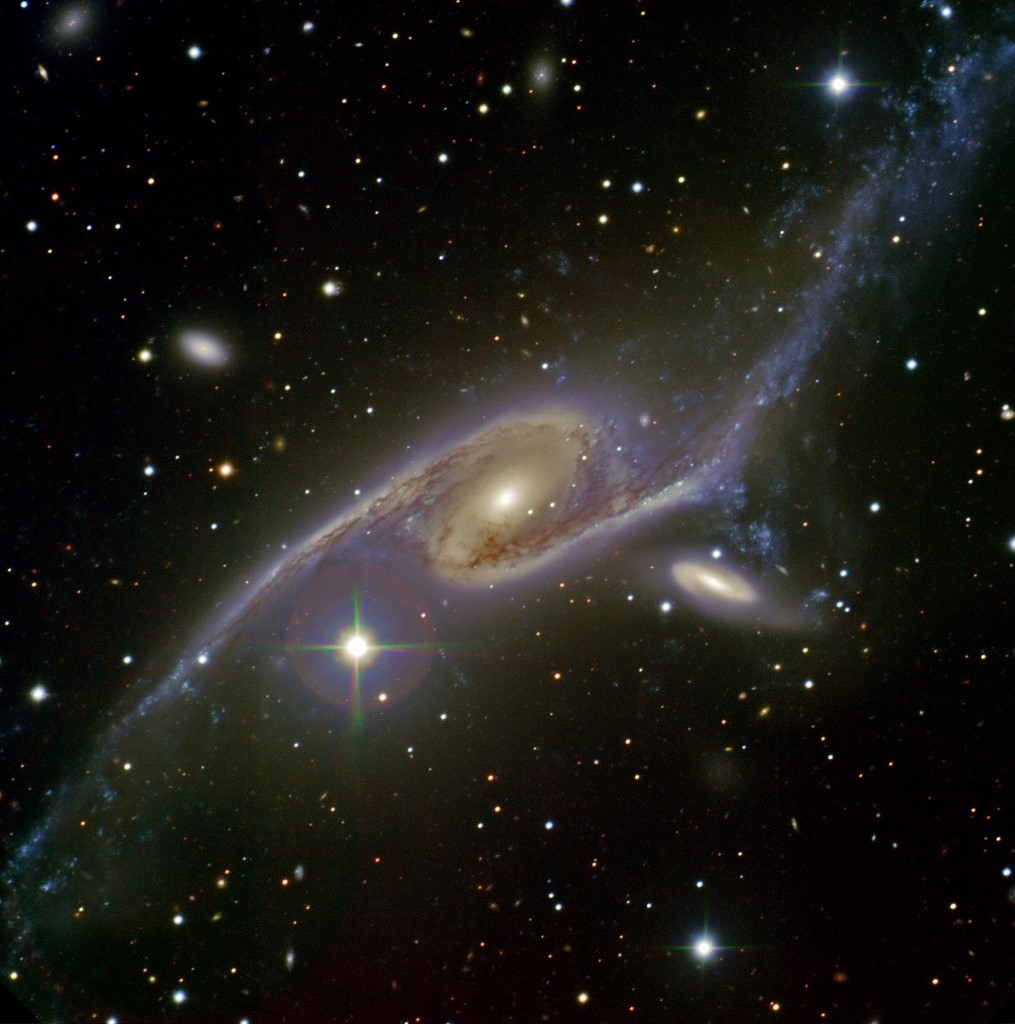 NGC 6872 (also known as the Condor Galaxy) is a giant barred spiral galaxy located about 210 million light-years away from Earth in the southern constellation of Pavo (the Peacock) while it is receding from us at roughly 4555 kilometers per second. It is interacting with the lenticular disk galaxy IC 4970 (seen to the right of the giant galaxy in this image).

Measuring tip-to-tip across its two outsized spiral arms, NGC 6872 spans more than 522,000 light-years, making it the largest known spiral galaxy up to now. Its stellar bar alone measures about 26,000 light-years in radius, or about twice the average length found in barred spirals… it is a bar that befits a giant galaxy.

IC 4970 contains a rapidly growing supermassive black hole which is heavily cocooned in gas and dust. Despite this obscuring gas and dust, it seems that there is not enough hot gas in IC 4970 to fuel the growth of the black hole. But IC 4970 has likely pulled over some of NGC 6872’s deep reservoir of cold gas, providing a new fuel supply to power the giant black hole.

The northeastern arm of NGC 6872 is the most disturbed and is populated by a plethora of bluish objects, many of which are star-forming regions. But at its far end, visible only in the ultraviolet, is an object that appears to be a tidal dwarf galaxy. The gravitational interaction of NGC 6872 and IC 4970 may have spawned this new dwarf galaxy which is brighter in ultraviolet than other regions of the galaxy, a sign it bears a rich supply of hot young stars less than 200 million years old.

There is a distinct pattern of stellar age along the galaxy’s two prominent spiral arms. The youngest stars appear in the far end of the northeastern arm, within the tidal dwarf, and stellar ages skew progressively older toward the galaxy’s center. The southwestern arm displays the same pattern, which is likely connected to waves of star formation triggered by the galactic encounter about 130 million years ago.

There is no sign of recent star formation along the huge bar of NGC 6872, which indicates it formed at least a few billion years ago. Its aged stars provide a fossil record of the galaxy’s stellar population before the encounter with IC 4970 stirred things up.

This image is taken with the 8 meter Gemini South telescope in Chile. The idea to image this titanic galaxy collision comes from a winning contest essay submitted in 2010 to the Gemini Observatory by the Sydney Girls High School Astronomy Club.