News by Subject » Anne's Image of the Day » Anne’s Picture of the Day: Star Cluster Messier 4 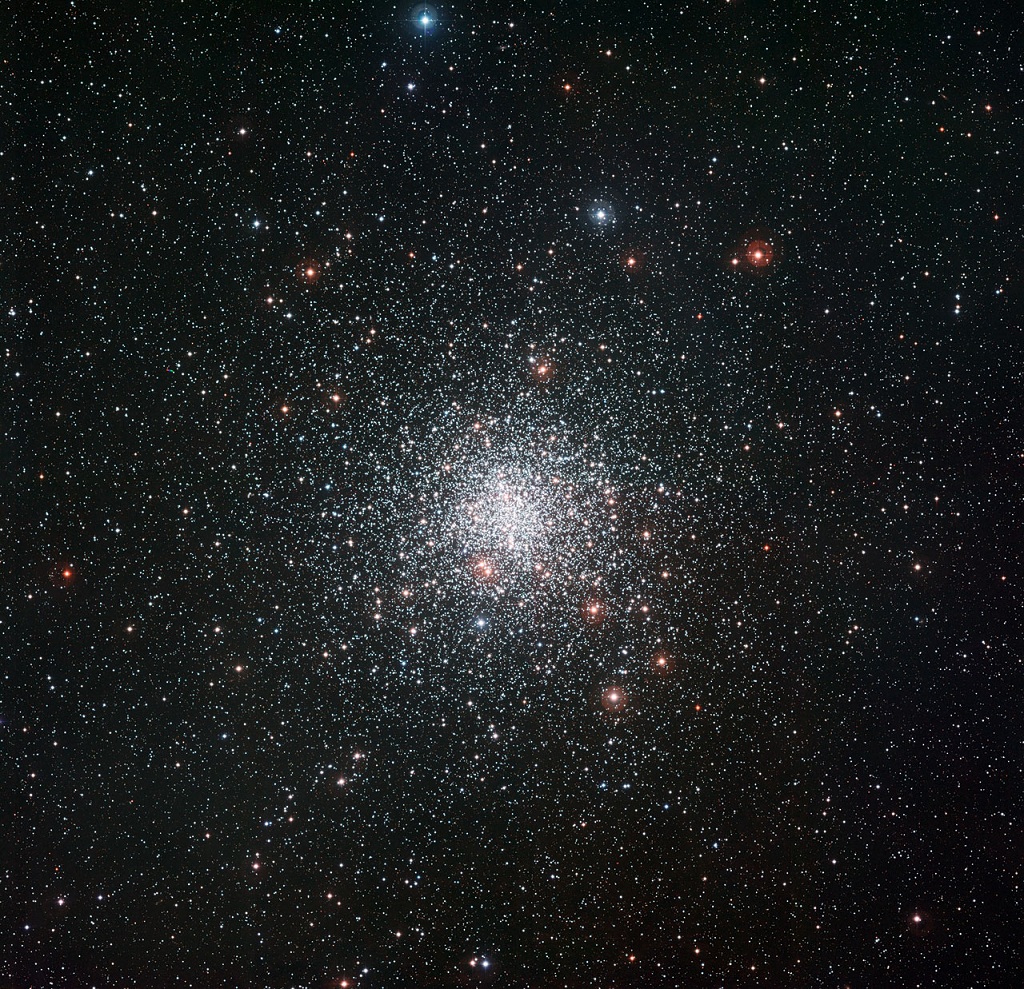 Messier 4 (also known as NGC 6121) is a rather loosely concentrated globular star cluster of about 75 light-years across, located some 7,200 light-years away in the constellation of Scorpius, west of the bright star Antares, and is receding from us at 70.4 km/sec. It is one of the closest globular clusters to our Solar System, and the first globular cluster in which individual stars were resolved. It has an estimated age of 12.2 billion years.

Half the cluster’s mass is concentrated in an inner spherical volume of only 16 light-years diameter. It features a characteristic “bar” structure across its core and consists of tens of thousands of ancient stars and at least 43 variable stars. It is also home to many white dwarfs; some of which are among the oldest known stars in the Milky Way Galaxy. In 1987 a millisecond pulsar (1821-24) was discovered in the cluster with a period of 3.0 milliseconds!

As the stars in globular clusters are old, they are not normally rich in chemical elements heavier than helium. (Most of the chemical elements heavier than helium are created in stars and dispersed into the interstellar medium at the end of their lives. This enriched material then forms the building blocks of future stellar generations. As a result very old stars, such as those in globular clusters, which formed before significant enrichment had occurred, are found to have lower abundances of the heavier elements when compared to stars, such as the Sun, that formed later.)

However, one of the stars in Messier 4 contains an unexpectedly large amount of lithium. Normally this rare element is gradually destroyed over the billions of years of a star’s life, but this one star seems to have the secret of eternal youth. It has either somehow managed to retain its original lithium, or it has found a way to enrich itself with fresh lithium.

There is evidence that Messier 4 hosts two distinct stellar populations. Each of the populations is a group of stars that all formed at about the same time. Thus the cluster may have undergone at least two separate cycles of star formation.

A planet (PSR B1620-26 b) with 2.5 times the mass of Jupiter was discovered in this cluster in July 2003. Its age is estimated to be around 13 billion years — almost three times as old as the Solar System! It is also unusual in that it orbits a binary system of a white dwarf and a pulsar (PSR B1620-26).

Messier 4 is following an orbit through the Milky Way that has a period of approximately 116 million years. By each passage through the disk of the galaxy, close to the galactic nucleus, Messier 4 undergoes a tidal shock, which can cause a repeated shedding of stars. Thus the cluster may have been much more massive in the past.

This image was taken by the Wide Field Imager on the 2.2-metre telescope at ESO’s La Silla Observatory in Chile.