News by Subject » Anne's Image of the Day » Anne’s Picture of the Day: The Calabash Nebula

The Calabash Nebula, a protoplanetary nebula in Puppis 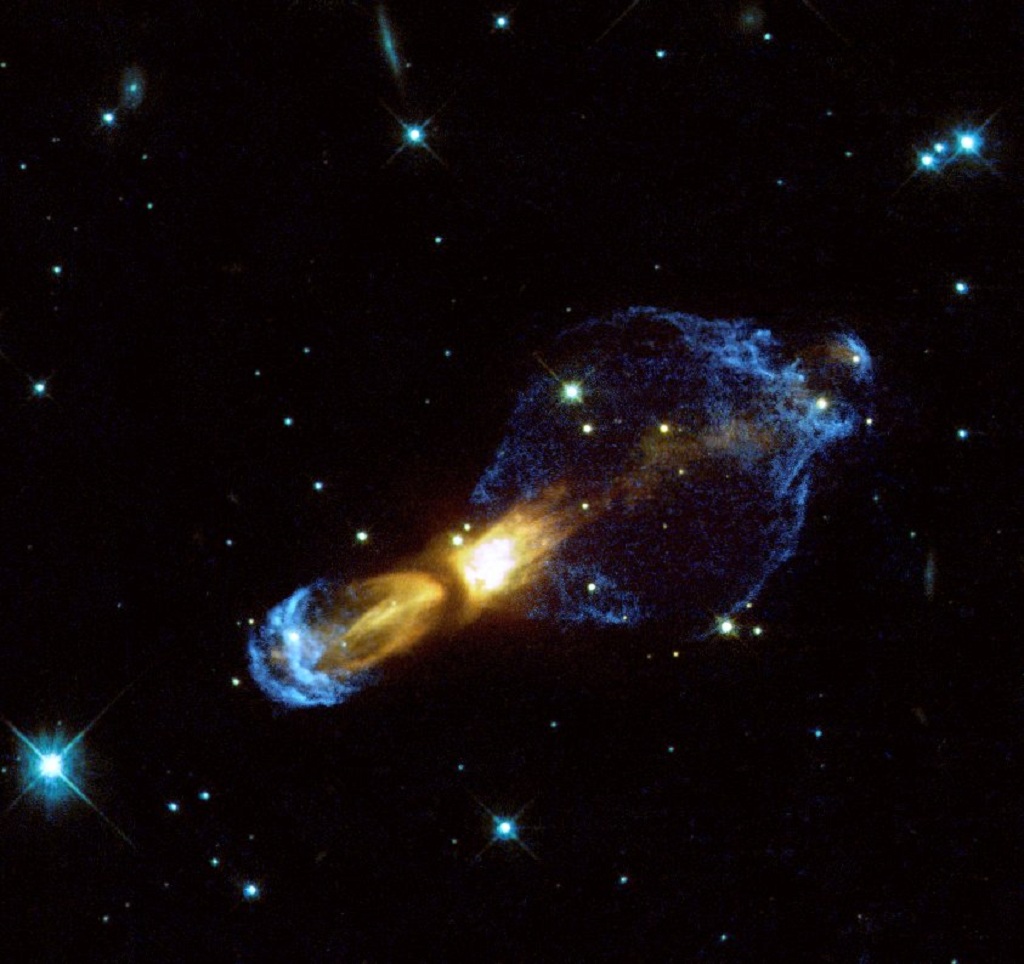 The Calabash Nebula (OH 231.84 +4.22) is a bipolar protoplanetary nebula of about 1.4 light-years long, located some 4,200 light-years away in the constellation of Puppis. The nebula is sometimes called the Rotten Egg Nebula because it contains a relatively large amount of sulphur, an element that, when combined with other elements, can smell like a rotten egg.

Protoplanetary nebulae are clouds of dust and gas formed from material shed by an aging central star similar in mass to our Sun. For such a star death is a long process. After billions of years, the hydrogen fuel that powers the star begins to run out. The star balloons to great size and becomes a red giant. Eventually, however, the star collapses back on itself. This increases the temperature at its core and most of the stars material is catapulted into space, enveloping itself in clouds of gas, but the core is not yet hot enough to make the gas itself glow on its own. Instead, the gas is merely reflecting the light from the star.

But as the star continues to evolve, it becomes hot enough to emit strong ultraviolet light. At that point it will have the power needed to make the gas glow, and will become a real full-fledged planetary nebula. But before the nebula begins to shine, fierce winds of material ejected from the star will continue to shape the surrounding gas into intricate patterns. Then the star cools down and all that is left after this process is the exposed, hot and dead core, known as a white dwarf.

In the Calabash Nebula, violent gas collisions produced supersonic shock fronts in the dying central star, which is hidden in the dusty band at the center. The bright yellow-orange colors in the picture show how dense gas is flowing from the star in opposite directions, at speeds up to one and a half million kilometers per hour (one million miles per hour). Most of the star’s original mass is now contained in these bipolar gas structures.

The warmest parts of the gas, heated by the violent shocks, form a complex double-bubble shape. The gas stream (shown in blue) rams into the surrounding material. Much of the gas flow observed today seems to stem from a sudden acceleration that took place only about 800 years ago. And at some 1,000 years from now, the Calabash Nebula will become a fully developed planetary nebula.

This image is taken with NASA’s Hubble Space Telescope, using filters that only let through light from ionized hydrogen and nitrogen atoms.