News by Subject » Anne's Image of the Day » Anne’s Picture of the Day: The Flame Nebula

The Flame Nebula, an emission nebula in Orion 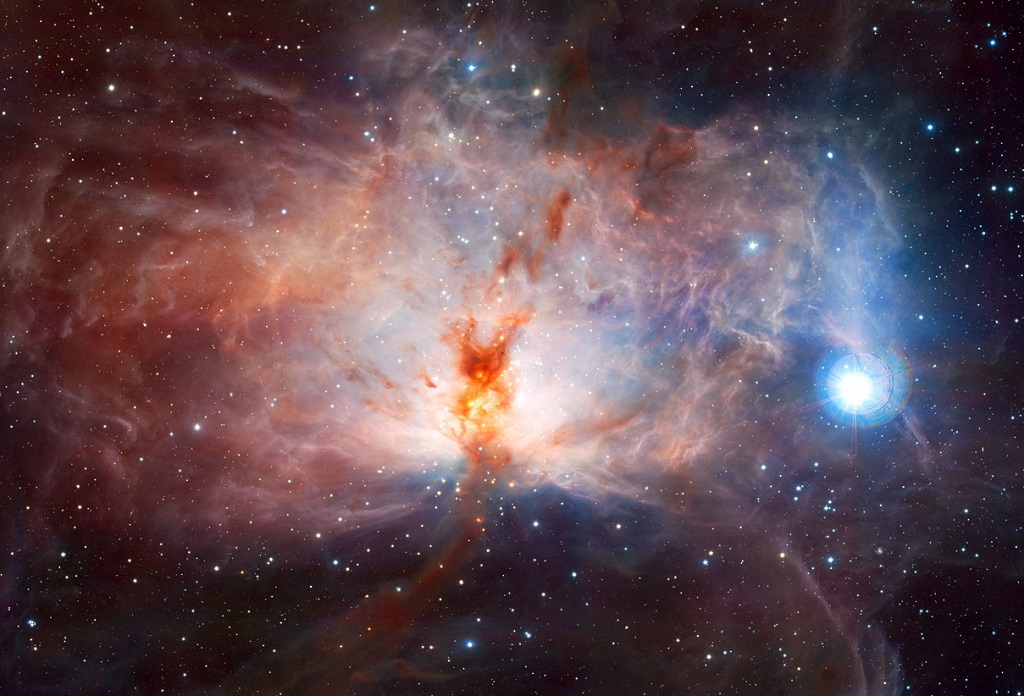 The Flame Nebula (designated NGC 2024, Orion B and Sh2-277) is an emission nebula, a star-forming cloud of gas and dust, located about 1,500 light-years away from Earth in the constellation of Orion (the Hunter). It is part of the Orion Molecular Cloud Complex, a star-forming region that includes the famous Horsehead Nebula.

The nebula, from its glow and dark dust lanes, appears like a fire. But, the glow of the nebula is caused by intense ultraviolet radiation from its central massive star, known as IRS2b, which is 20 times heavier than our Sun, and buried in the blanketing dust. This star would be almost as bright to our eyes as the three stars in Orion’s belt, but the dust makes the star appear 4 billion times fainter than it really is.

Behind the thick dark lane of dust and gas, which splits the Flame Nebula in two halves, is a rich cluster of young, blue, massive stars (also designated as NGC 2024). At least half the stars are known to have circumstellar accretion disks, possibly the precursors of terrestrial Earth-like planets.

In visible light the core of the nebula is completely hidden behind obscuring dust, but in this VISTA view, taken in infrared light, the embedded star cluster which is forming inside the nebula is revealed. The cluster is thought to be less than one million years old.

Visible just on the right side of the Flame Nebula we see the bright, hot blue supergiant Alnitak (also known as Zeta Orionis), which is the easternmost star of Orion’s Belt. Until 2003, when IRS2b was found, it was thought that Alnitak, with a luminosity of 100,000 times that of our Sun, was energizing the gas in the nebula. However, it was found that Alnitak (actually a triple star) is much closer to Earth, at some 736 light-years distant.

This image was created from VISTA images taken through three filters in the near-infrared part of the spectrum. The total exposure time was 14 minutes.