News by Subject » Anne's Image of the Day » Anne’s Picture of the Day: The Merope Nebula

The Merope Nebula, a reflection nebula in Taurus 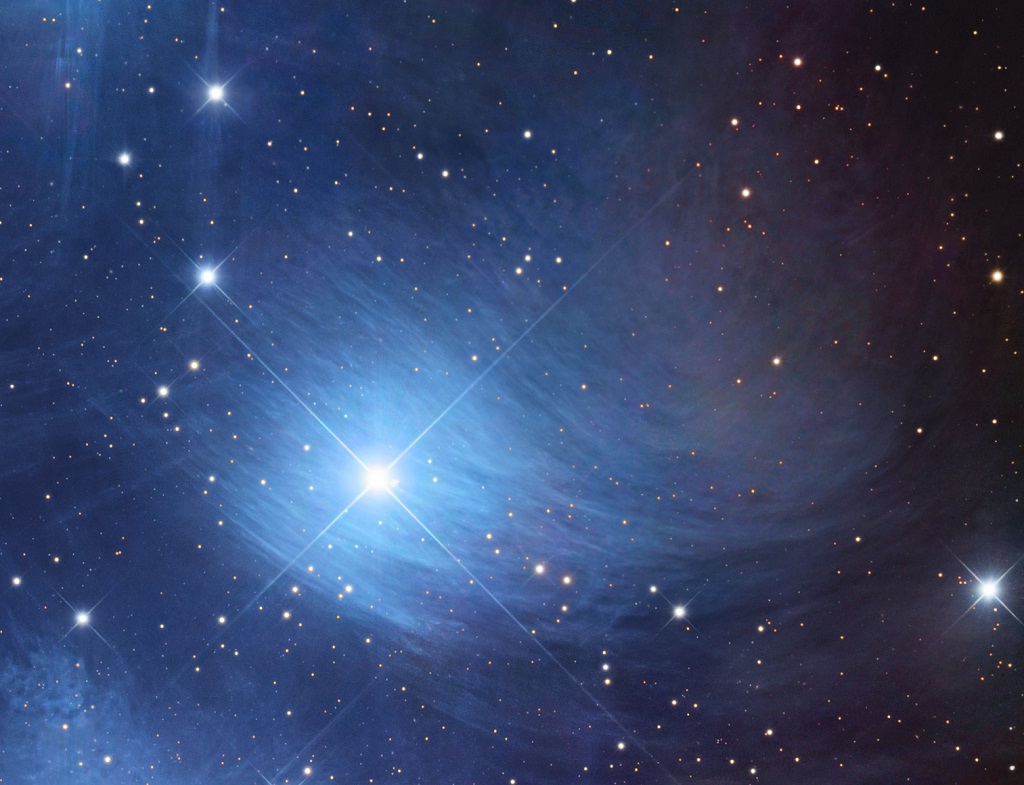 The Merope Nebula (also known as NGC 1435 and Tempel’s Nebula, after the German astronomer Wilhelm Tempel who discovered the nebula on October 19, 1859) is a diffuse reflection nebula of about 4 light-years across, located some 440 light-years away from Earth in the constellation of Taurus (the Bull). It is part of the 100 million year-old Pleiades (Messier 45), an open star cluster which is currently moving through an interstellar cloud of dust and gas at about 40 kilometers per second.

Reflection nebulae reflect light from a nearby star. In the Merope Nebula, many small carbon grains reflect the light. The blue color typical of reflection nebula is caused by blue light being more efficiently scattered by the carbon dust than red light. The brightness of the nebula is determined by the size and density of the reflecting grains, and by the color and brightness of the neighboring star(s).

As the most conspicuous of the reflection nebulae in the Pleiades, the Merope Nebula is illuminated by one of the “seven sisters” in the Pleiades, the 4th magnitude star Merope (also known as 23 Tau), which it surrounds. It is long thought that the dust in the reflection nebula is the remnant of the cloud that the Pleiades formed from, but it is now known that the Merope Nebula is caused by a chance encounter between the open cluster of stars and the interstellar cloud it is plowing into.

The Merope Nebula contains a bright knot – designated IC 349 and also known as Barnard’s Merope Nebula, after the American astronomer E. E. Barnard who discovered it in 1890 – which lies at only 0.06 light-years distant to the southeast of Merope (seen in this image as the white, fluffy dot that almost sticks to the right side of the star). IC 349 is naturally very bright but is almost hidden in the radiance of Merope.

This composite image is acquired at the Nighthawk Observatory with a total exposure of 14 hours.