News by Subject » Anne's Image of the Day » Anne’s Picture of the Day: The Nereidum Montes

The Nereidum Montes, a mountain range on Mars 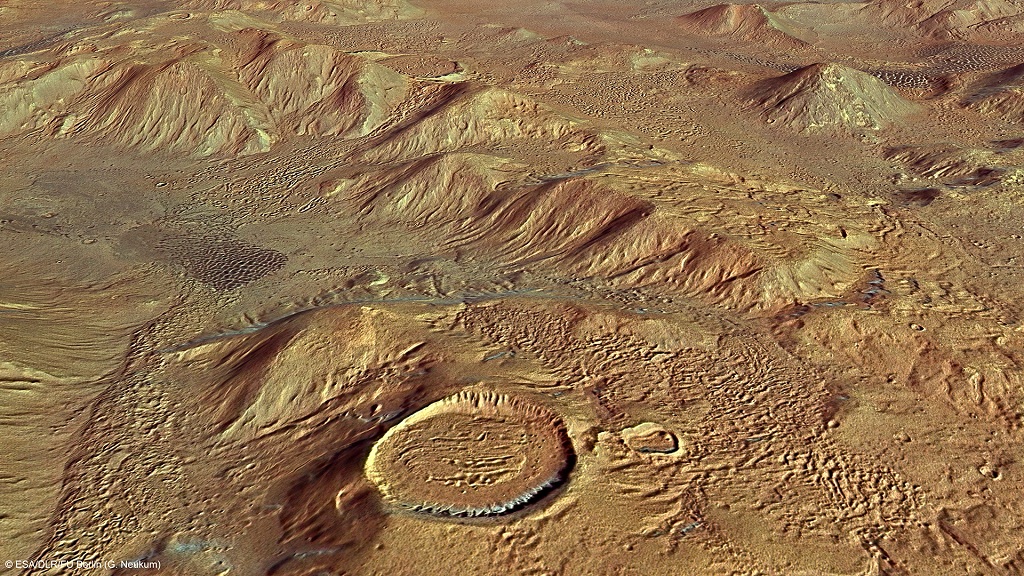 The Nereidum Montes is a mountain range on Mars with mountains of three to four thousand meters in height. It stretches in an arc for about 1,150 kilometers, and marks the far northern extent of Argyre, the second largest impact basin on Mars, located in the southern highlands of the Red Planet.

This image shows a part of this mountain range. A region marked by various geological processes, where water and ice – on and beneath the surface – have left their print and, more recently, wind and weather have caused erosion, like extensive rippling sand dune fields that have formed near the wind-sheltered sides of mounds and canyons.

In some areas the Nereidum Montes has gullies, which occur on steep slopes, especially craters. Gullies are believed to be relatively young because they have few, if any craters, and they lie on top of sand dunes which are young. Most likely they are formed by liquid water, either coming from an underground layer of water-bearing rock, gravel, sand, or silt from which groundwater can be extracted using a water well, or left over from old glaciers.

Extensive dendritic drainage patterns were formed when liquid water drained into deeper regions within the area. On Earth, tree-like channels of this kind are usually formed by surface runoff after significant rainfall, or when snow or ice melts. Similar processes are thought to have occurred on Mars in the distant past, when scientists now know there to have been water on the surface of the Red Planet.

Several of the craters within the region show concentric crater fill, a distinctive Martian process marked by rings of surface fluctuations within a crater rim. The ratios between the diameter and depth of the filled craters suggest that there may still be water ice, possibly in the form of ancient glaciers, present below the dry surface debris cover. Scientists have estimated that the water-ice depth in these craters varies from several tens up to hundreds of metres.
A large crater (not visible in this image) appears to have spilled out a glacier-like formation towards lower-lying parts of the region. A smooth area to its east appears to be the rather young, evidenced by an almost complete lack of cratering.

Another indication of subsurface water is seen in the fluidised ejecta blanket surrounding another crater (also not visible in this image). These ejecta structures can develop when a comet or asteroid hits a surface saturated with water or water ice.

This computer-generated perspective view is captured on 6 June 2012 by the high-resolution stereo camera on ESA’s Mars Express, from an altitude of around 500 kilometers, giving an image resolution of 23 meters per pixel. It highlights many of the rippled sand dunes which form on the wind-sheltered sides of mounds and canyons, as well as the lobate and fan-shaped surface around the impact crater which dominates the lower portion of the image. These features may indicate the previous extent of glaciation in the region, before a drier period in the planet’s history created the smooth plains.