News by Subject » Anne's Image of the Day » Anne’s Picture of the Day: The Train Wreck Cluster

The Train Wreck Cluster, a galaxy cluster in Orion 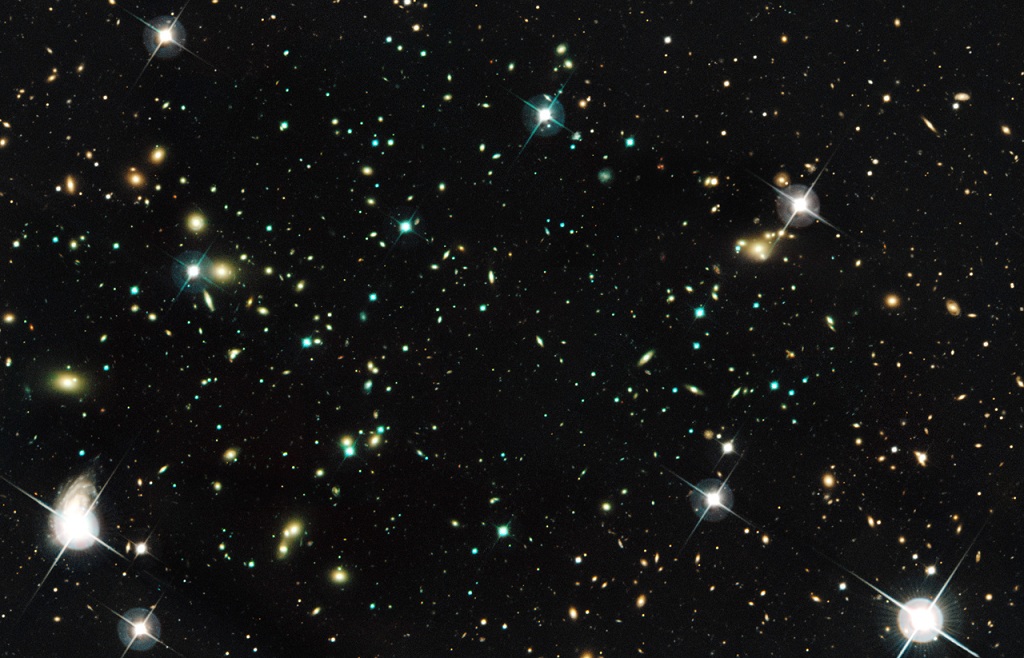 The Train Wreck Cluster (Abell 520) is a galaxy cluster of 5.4 million light-years across that contains about 300 galaxies. It lies some 2.65 billion light-years away in the constellation of Orion, while moving away from us at approximately 1,066 kilometers per second. The cluster has gotten its nickname because of its unusual chaotic structure due to the high-speed collision between smaller galaxy clusters.

When galaxies collide, three ingredients come into play: 1) individual galaxies and their billions of stars, 2) hot gas in between the galaxies, and 3) the mysterious dark matter which is thought to be the gravitational “glue” that holds galaxies together, and that actually makes up the bulk of the mass. Dark matter can only be detected through its gravitational effects.

During gigantic collisions like this, astronomers believed that the dark matter and the galaxies should stick together, even during the most violent collisions, as was seen in another galaxy collision (the Bullet Cluster). But in the collision of Abell 520, something surprising was seen.

We know that dark matter is affected by gravity, but it is supposed to barely interact with other matter or with itself: during an encounter, clouds of dark matter flow right through each other without slowing down. So what could have stripped these two apart?

Several explanations were suggested, but all these explanations would have posed problems for current theories.
Recently however, a new observation of Abell 520 found that the core does not appear to be over-dense in dark matter after all. In this new study astronomers estimated the amount of dark matter in the cluster by measuring the amount of gravitational “shear” in Hubble images.

This natural-color image of the galaxy cluster was taken with NASA’s Hubble Space Telescope and the Canada-France-Hawaii Telescope in Hawaii.