In a fjord in Canada scientists have found a landscape similar to one of Jupiter’s icy moons: Europa. It consists of a frozen and sulfurous environment, where sulfur associated with Arctic bacteria offer clues for the upcoming missions in the search for traces of life on Europa.

It is not easy to find a place on Earth where ice and sulfur come together, supposedly like on Europa, Jupiter’s moon. Nonetheless, this place has been located at Borup Fjord Pass in the Canadian High Arctic. Here the sulfurous yellow emissions contrast with the whiteness of the environment, creating images similar to those captured at Jupiter’s satellite.

US researchers have now verified that the sulfur involved in the life cycle of Arctic microorganisms has some characteristics that could help to detect biological remains on Europa. Large space agencies like NASA and the European Space Agency are already in the process of preparing missions.

“We have discovered that elemental sulfur (S) can contain morphological, mineralogical and organic ‘biosignatures’ linked to bacterial activity. If they are found on Europa, this would suggest the possible presence of microorganisms,” as explained to SINC by Damhnait Gleeson, lead author of the study and currently member of the Centro de Astrobiologia (INTA-CSIC, Spain). The ‘biosignatures’ are associated with needle and rhomboid sulfur shapes in which mineralised remains of microorganisms and extracellular material appears. Thanks to electron microscopy and X-ray diffraction techniques, the formation of a rare type of sulfur has also been observed in association with organic components: the rosickyite. What is more is that small quantities (parts per million) of protein, fatty acids and other biomolecules have appeared in the sulfurous material.

“There is much evidence of bacterial activity,” highlights Gleeson, who wonder if in the Europa’s icy crust, or the ocean or lakes supposedly beneath it, there could be a similar microbial community that uses sulfur as their source of energy.

The researcher conducted the study, which has now been published in the Astrobiology journal, as a member of NASA’s Jet Propulsion Laboratory and the University of Colorado in the USA. She is currently working as a scientist in the Centro de Astrobiologia in Río Tinto (Spain), a place similar to Mars. 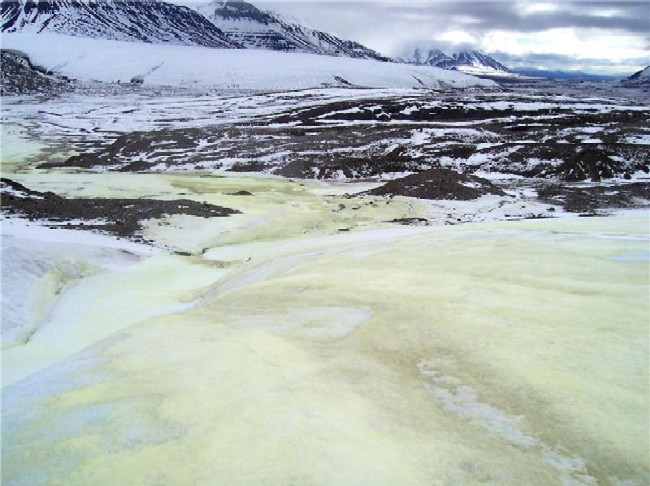