Astronomers using the Atacama Large Millimeter/submillimeter Array (ALMA) have for the first time found that the outer region of a dusty disk encircling a brown dwarf contains millimeter sized solid grains like those found in denser disks around newborn stars. The surprising finding challenges theories of how rocky, Earth-size planets form, and suggests that rocky planets may be even more common in the Universe than expected.

This artist’s impression shows the disk of gas and dust around a brown dwarf.  Image Credit: ALMA (ESO/NAOJ/NRAO)/M. Kornmesser (ESO)

Rocky planets are thought to form through the random collision and sticking together of what are initially microscopic particles in the disk of material around a star. These tiny particles, known as cosmic dust grains, are similar to very fine soot or sand. However, in the outer regions around a brown dwarf — a star-like object, but one too small to shine brightly like a star — astronomers expected that grains could not grow because the disks were too sparse, and particles would be moving too fast to stick together after colliding. Also, prevailing theories say that any grains that manage to form should move quickly towards the central brown dwarf, disappearing from the outer parts of the disk where they could be detected.

“We were completely surprised to find millimetre-sized grains in this thin little disk,” said Luca Ricci of the California Institute of Technology, USA, who led a team of astronomers based in the United States, Europe and Chile. “Solid grains of that size shouldn’t be able to form in the cold outer regions of a disk around a brown dwarf, but it appears that they do. We can’t be sure if a whole rocky planet could develop there, or already has, but we’re seeing the first steps, so we’re going to have to change our assumptions about conditions required for solids to grow,” he said. 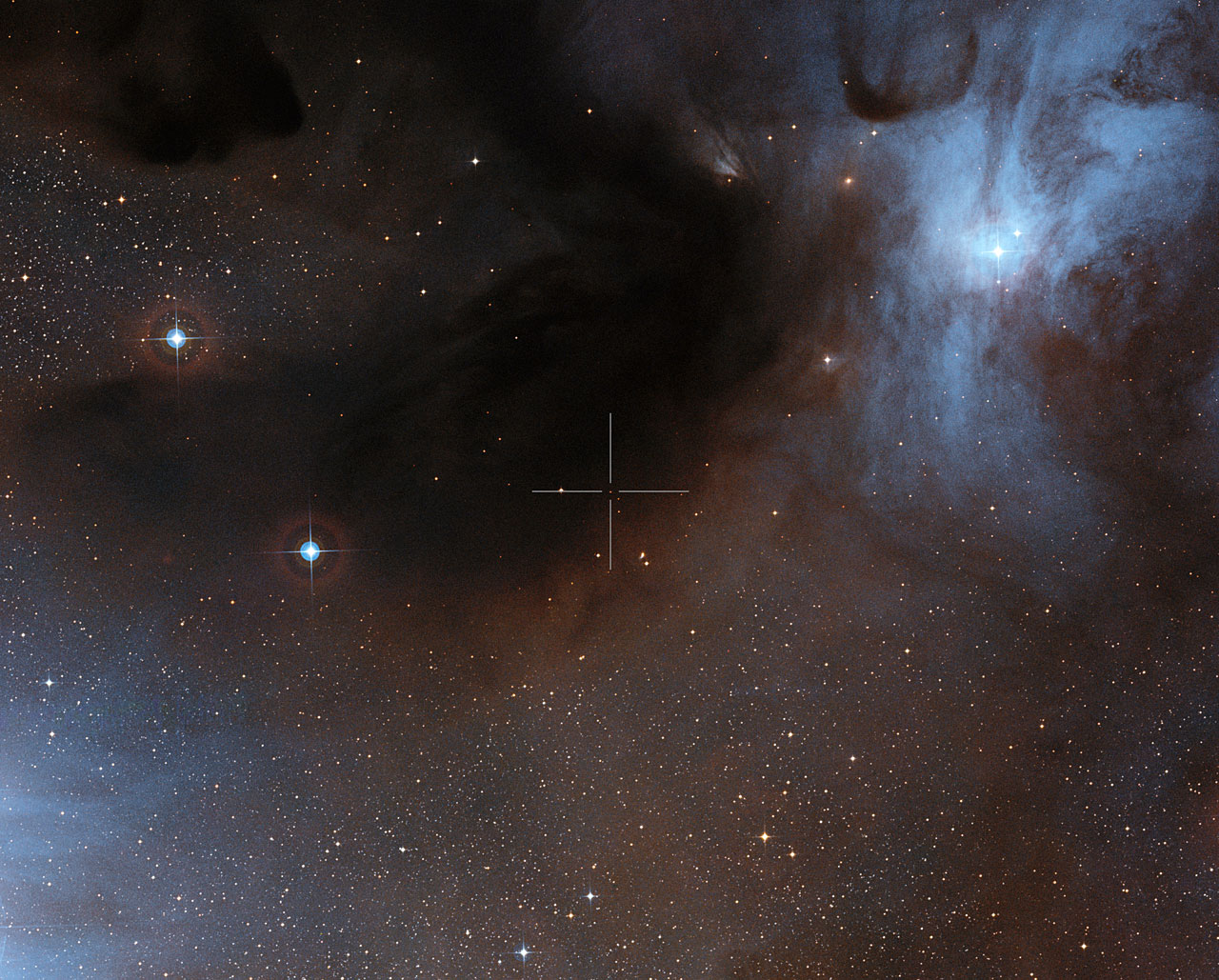 This image shows the brown dwarf ISO-Oph 102, or Rho-Oph 102, in the Rho Ophiuchi star-forming region. Its position is marked by the crosshairs. This visible-light view was created from images forming part of the Digitized Sky Survey 2. Image Credit: ALMA (ESO/NAOJ/NRAO)/Digitized Sky Survey 2. Acknowledgement: Davide De Martin

ALMA’s increased resolution compared to previous telescopes also allowed the team to pinpoint carbon monoxide gas around the brown dwarf — the first time that cold molecular gas has been detected in such a disk. This discovery, and that of the millimeter-size grains, suggest that the disk is much more similar to the ones around young stars than previously expected.

Ricci and his colleagues made their finding using the partially completed ALMA telescope in the high-altitude Chilean desert. ALMA is a growing collection of high precision, dish-shaped antennas that work together as one large telescope to observe the Universe with groundbreaking detail and sensitivity. ALMA “sees” the Universe in millimeter-wavelength light, which is invisible to human eyes. Construction of ALMA is scheduled to finish in 2013, but astronomers began observing with a partial array of ALMA dishes in 2011.

This video starts with a broad panorama of the spectacular central regions of the Milky Way seen in visible light. It zooms in to the Rho Ophiuchi star-forming region, to the brown dwarf ISO-Oph 102, or Rho-Oph 102. Then, an artist’s impression shows the disk of material around the brown dwarf, and zooms in to show how tiny grains collide and stick together, to form large grains. Video Credit: ALMA (ESO/NAOJ/NRAO)/L. Calçada (ESO)/M. Kornmesser (ESO)/Nick Risinger (skysurvey.org)/Digitized Sky Survey 2 Music: movetwo

The astronomers pointed ALMA at the young brown dwarf ISO-Oph 102, also known as Rho-Oph 102, in the Rho Ophiuchi star-forming region in the constellation of Ophiuchus (The Serpent Bearer). With about 60 times the mass of Jupiter but only 0.06 times that of the Sun, the brown dwarf has too little mass to ignite the thermonuclear reactions by which ordinary stars shine. However, it emits heat released by its slow gravitational contraction and shines with a reddish colour, albeit much less brightly than a star.

ALMA collected light with wavelengths around a millimeter  emitted by disk material warmed by the brown dwarf. The grains in the disk do not emit much radiation at wavelengths longer than their own size, so a characteristic drop-off in the brightness can be measured at longer wavelengths. ALMA is an ideal instrument for measuring this drop-off and thus for sizing up the grains. The astronomers compared the brightness of the disk at wavelengths of 0.89 mm and 3.2 mm. The drop-off in brightness from 0.89 mm to 3.2 mm was not as steep as expected, showing that at least some of the grains are a millimeter or more in size.

“ALMA is a powerful new tool for solving mysteries of planetary system formation,” commented Leonardo Testi from ESO, a member of the research team. “Trying this with previous generation telescopes would have needed almost a month of observing — impossibly long in practice. But, using just a quarter of ALMA’s final complement of antennas, we were able to do it in less than one hour!” he said.

In the near future, the completed ALMA telescope will be powerful enough to make detailed images of the disks around Rho-Oph 102 and other objects. Ricci explained, “We will soon be able to not only detect the presence of small particles in disks, but to map how they are spread across the circumstellar disk and how they interact with the gas that we’ve also detected in the disk. This will help us better understand how planets come to be.”

This research is presented in a paper in the Astrophysical Journal Letters.