Astronomers using the NASA/ESA Hubble Space Telescope have shown for the first time that bursts of star formation have a major impact far beyond the boundaries of their host galaxy. These energetic events can affect galactic gas at distances of up to twenty times greater than the visible size of the galaxy – altering how the galaxy evolves, and how matter and energy is spread throughout the Universe. 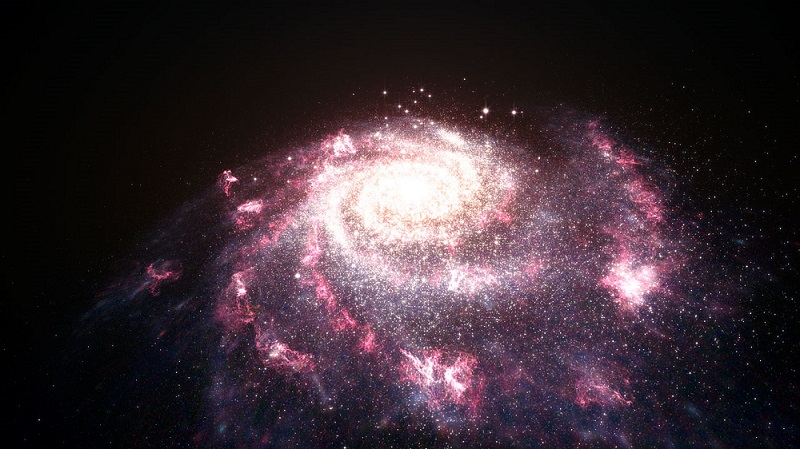 This illustration shows a messy, chaotic galaxy undergoing bursts of star formation. This star formation is intense; it was known that it affects its host galaxy, but this new research shows it has an even greater effect than first thought. The winds created by these star formation processes stream out of the galaxy, ionizing gas at distances of up to 650,000 light-years from the galactic center. Image Credit: ESA, NASA, L. Calçada

When galaxies form new stars, they sometimes do so in frantic episodes of activity known as starbursts. These events were commonplace in the early Universe, but are rarer in nearby galaxies.

During these bursts, hundreds of millions of stars are born, and their combined effect can drive a powerful wind that travels out of the galaxy. These winds were known to affect their host galaxy – but this new research now shows that they have a significantly greater effect than previously thought.

An international team of astronomers observed 20 nearby galaxies, some of which were known to be undergoing a starburst. They found that the winds accompanying these star formation processes were capable of ionizing [1] gas up to 650,000 light-years from the galactic center – around twenty times further out than the visible size of the galaxy. This is the first direct observational evidence of local starbursts impacting the bulk of the gas around their host galaxy, and has important consequences for how that galaxy continues to evolve and form stars.

This animation shows the method used to probe the gas around distant galaxies. Astronomers can use tools such as Hubble’s Cosmic Origins Spectrograph (COS) to probe faint galactic envelopes by exploiting even more distant objects — quasars, the intensely luminous centres of distant galaxies powered by huge black holes. As the light from the distant quasar passes through the galaxy’s halo, the gas absorbs certain frequencies – making it possible to study the region around the galaxy in detail. This new research utilised Hubble’s COS to peer through the very thin outskirts of galactic halos, much further out than shown in this representation, to explore galactic gas at distances of up to twenty times greater than the visible size of the galaxy itself. Video Credit: ESA, NASA, L. Calçada

“The extended material around galaxies is hard to study, as it’s so faint,” says team member Vivienne Wild of the University of St. Andrews. “But it’s important – these envelopes of cool gas hold vital clues about how galaxies grow, process mass and energy, and finally die. We’re exploring a new frontier in galaxy evolution!”

The team used the Cosmic Origins Spectrograph (COS) instrument [2] on the NASA/ESA Hubble Space Telescope to analyse light from a mixed sample of starburst and control galaxies. They were able to probe these faint envelopes by exploiting even more distant objects – quasars, the intensely luminous centers of distant galaxies powered by huge black holes. By analyzing the light from these quasars after it passed through the foreground galaxies, the team could probe the galaxies themselves.

“Hubble is the only observatory that can carry out the observations necessary for a study like this,” says lead author Sanchayeeta Borthakur, of Johns Hopkins University. “We needed a space-based telescope to probe the hot gas, and the only instrument capable of measuring the extended envelopes of galaxies is COS.”

The starburst galaxies within the sample were seen to have large amounts of highly ionized gas in their halos – but the galaxies that were not undergoing a starburst did not. The team found that this ionization was caused by the energetic winds created alongside newly forming stars.

This animation shows a galaxy undergoing a starburst. The galaxy has messy regions strung throughout its arms that are intensely bright and forming new stars. The winds produced by these star-forming processes can have an incredibly far-reaching effect on their host galaxy. Video Credit: ESA, NASA & L. Calçada

This has consequences for the future of the galaxies hosting the starbursts. Galaxies grow by accreting gas from the space surrounding them, and converting this gas into stars. As these winds ionize the future fuel reservoir of gas in the galaxy’s envelope, the availability of cool gas falls – regulating any future star formation.

“Starbursts are important phenomena – they not only dictate the future evolution of a single galaxy, but also influence the cycle of matter and energy in the Universe as a whole,” says team member Timothy Heckman, of Johns Hopkins University. “The envelopes of galaxies are the interface between galaxies and the rest of the Universe – and we’re just beginning to fully explore the processes at work within them.”

The team’s results will appear in a paper entitled “The Impact of Starbursts on the Circumgalactic Medium“, in the 1 May 2013 issue of The Astrophysical Journal.

[1] A gas is said to be ionized when its atoms have lost one or more electrons – in this case by energetic winds exciting galactic gas and knocking electrons out of the atoms within.

[2] Spectrographs are instruments that break light into its constituent colors and measure the intensity of each color  revealing information about the object emitting the light – such as its chemical composition, temperature, density, or velocity.