Planets rich in carbon, including so-called diamond planets, may lack oceans, according to NASA-funded theoretical research.

This artist’s concept illustrates the fate of two different planets: the one on the left is similar to Earth, made up largely of silicate-based rocks with oceans coating its surface. The one on the right is rich in carbon — and dry. Chances are low that life as we know it, which requires liquid water, would thrive under such barren conditions. Image Credit: NASA/JPL-Caltech

Our Sun is a carbon-poor star, and as result, our planet Earth is made up largely of silicates, not carbon. Stars with much more carbon than the Sun, on the other hand, are predicted to make planets chock full of carbon, and perhaps even layers of diamond. By modeling the ingredients in these carbon-based planetary systems, the scientists determined they lack icy water reservoirs thought to supply planets with oceans.

“The building blocks that went into making our oceans are the icy asteroids and comets,” said Torrence Johnson of NASA’s Jet Propulsion Laboratory in Pasadena, Calif, who presented the results Oct. 7 at the American Astronomical Society Division of Planetary Sciences meeting in Denver. Johnson, a team member of several NASA planetary missions, including Galileo, Voyager and Cassini, has spent decades studying the planets in our own Solar System.

“If we keep track of these building blocks, we find that planets around carbon-rich stars come up dry,” he said.

Johnson and his colleagues say the extra carbon in developing star systems would snag the oxygen, preventing it from forming water. “It’s ironic that if carbon, the main element of life, becomes too abundant, it will steal away the oxygen that would have made water, the solvent essential to life as we know it,” said Jonathan Lunine of Cornell University, Ithaca, N.Y., a collaborator on the research.

One of the big questions in the study of planets beyond our Solar System, called exoplanets, is whether or not they are habitable. Researchers identify such planets by first looking for those that are situated within the “habitable zone” around their parent stars, which is where temperatures are warm enough for water to pool on the surface. NASA’s Kepler mission has found several planets within this zone, and researchers continue to scrutinize the Kepler data for candidates as small as Earth. 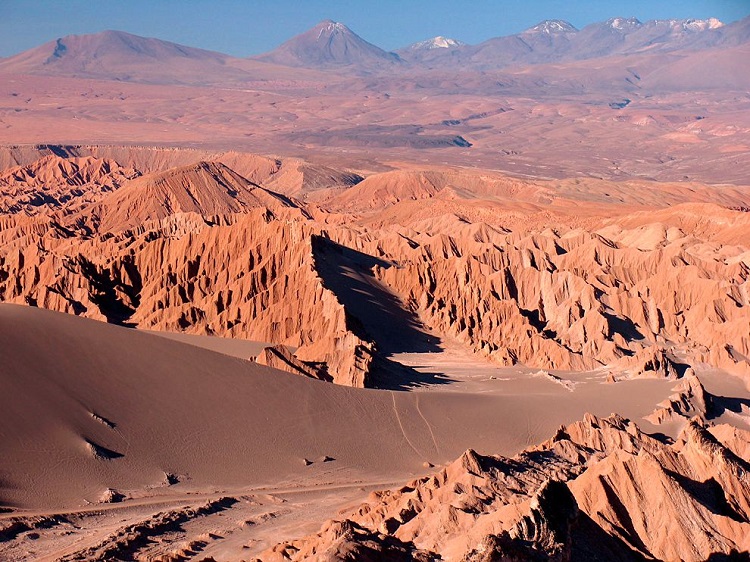 This photo shows what a carbon-rich world might look like. However, this is the Valley of the Moon, Atacama Desert, Chile, the driest place on Earth. The Atacama Desert covers 600 miles from Peru’s southern border into northern Chile. There are stretches where rain has never been measured. Image Credit: Richard Nowitz, National Geographic

But even if a planet is found in this so-called “Goldilocks” zone, where oceans could, in theory, abound, is there actually enough water available to wet the surface? Johnson and his team addressed this question with planetary models based on measurements of our Sun’s carbon-to-oxygen ratio. Our Sun, like other stars, inherited a soup of elements from the Big Bang and from previous generations of stars, including hydrogen, helium, nitrogen, silicon, carbon and oxygen.

“Our Universe has its own top 10 list of elements,” said Johnson, referring to the 10 most abundant elements in our Universe.

These models accurately predict how much water was locked up in the form of ice early in the history of our Solar System, billions of years ago, before making its way to Earth. Comets and/or the parent bodies of asteroids are thought to have been the main water suppliers, though researchers still debate their roles. Either way, the objects are said to have begun their journey from far beyond Earth, past a boundary called the “snow line,” before impacting Earth and depositing water deep in the planet and on its surface.

When the researchers applied the planetary models to the carbon-rich stars, the water disappeared. “There’s no snow beyond the snow line,” said Johnson.

The computer model results supporting these conclusions were published in the Astrophysical Journal last year (http://arxiv.org/abs/1208.3289). The implications for habitability in these systems were the focus of the Division of Planetary Sciences meeting.