The traditional picture of comets as cold, icy, unchanging bodies throughout their history is being reappraised in the light of analyses of dust grains from Comet Wild2. A team led by the University of Leicester has detected the presence of iron in a dust grain, evidence of space weathering that could explain the rusty reddish colour of Wild2’s outer surface. The results will be presented by Dr John Bridges at the National Astronomy Meeting in Manchester on Tuesday 27th March. 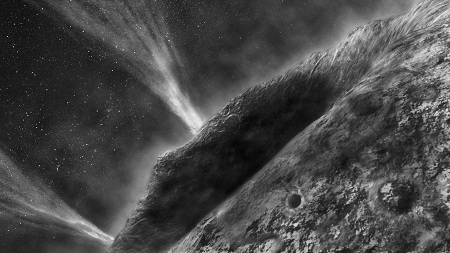 This is an artist’s concept depicting a view of comet Wild 2 as seen from NASA’s Stardust spacecraft during its flyby of the comet on Jan. 2, 2004

The Wild2 grains were collected by the NASA Stardust mission and returned to Earth in 2006. The fast-moving dust grains were collected in arrays of aerogel, a silicon-based foam that is 99 per cent empty space, which slowed the particles from velocities of 6 kilometres a second to a halt over just a few millimetres. Since then, an international team of scientists has been analysing the samples and the carrot-shaped tracks that they left in the aerogel. Microscopic samples dissected from the grains have been analysed at facilities around the UK, and in particular this work was performed at the Diamond Light Source synchrotron in Oxfordshire and Leicester University. Through a range of analytical techniques, scientists in the UK have been able to fully analyse the mineralogy and isotopes of the samples.

“The total mass of Comet Wild2 grains returned is less than a milligram, so these samples are incredibly precious and a considerable analytical challenge,” said Bridges, of the University of Leicester.

The analysis from the Microfocus Spectroscopy beamline at the Diamond synchrotron shows that the surface of Comet Wild2 has been bombarded by particles in the solar wind and micrometeorites throughout its 4.5 billion year history. This space weathering has deposited nanometre-size grains of iron metal and reddened the surface of the comet.

This is the first mineralogical evidence for space weathering that has been identified in the Wild2 samples that was hinted at by other spectroscopic observations of the comet,” said Bridges. “It adds another piece of the puzzle to our understanding of the life history of comets.”