NASA’s Curiosity rover mission has found evidence a stream once ran vigorously across the area on Mars where the rover is driving. There is earlier evidence for the presence of water on Mars, but this evidence — images of rocks containing ancient streambed gravels — is the first of its kind.

NASA’s Curiosity rover found evidence for an ancient, flowing stream on Mars at a few sites, including the rock outcrop pictured here, which the science team has named “Hottah” after Hottah Lake in Canada’s Northwest Territories. Image Credit: NASA/JPL-Caltech/MSSS

Scientists are studying the images of stones cemented into a layer of conglomerate rock. The sizes and shapes of stones offer clues to the speed and distance of a long-ago stream’s flow.

“From the size of gravels it carried, we can interpret the water was moving about 3 feet per second, with a depth somewhere between ankle and hip deep,” said Curiosity science co-investigator William Dietrich of the University of California, Berkeley. “Plenty of papers have been written about channels on Mars with many different hypotheses about the flows in them. This is the first time we’re actually seeing water-transported gravel on Mars. This is a transition from speculation about the size of streambed material to direct observation of it.” 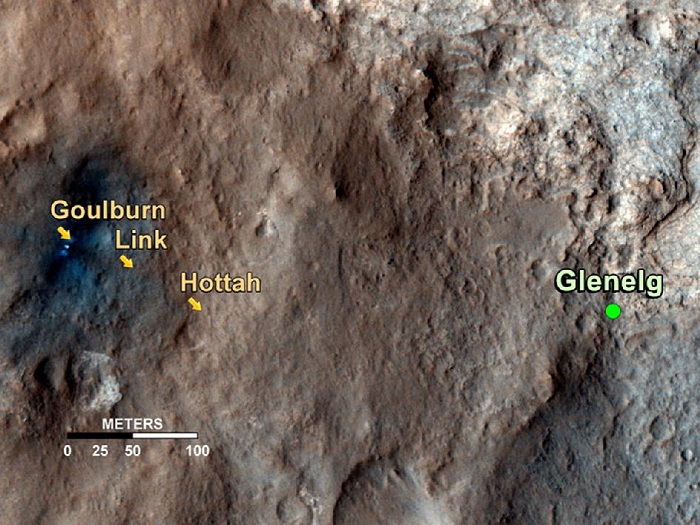 This map shows the path on Mars of NASA’s Curiosity rover toward Glenelg, an area where three terrains of scientific interest converge. Image Credit: NASA/JPL-Caltech/Univ. of Arizona

The finding site lies between the north rim of Gale Crater and the base of Mount Sharp, a mountain inside the crater. Earlier imaging of the region from Mars orbit allows for additional interpretation of the gravel-bearing conglomerate. The imagery shows an alluvial fan of material washed down from the rim, streaked by many apparent channels, sitting uphill of the new finds.

The rounded shape of some stones in the conglomerate indicates long-distance transport from above the rim, where a channel named Peace Vallis feeds into the alluvial fan. The abundance of channels in the fan between the rim and conglomerate suggests flows continued or repeated over a long time, not just once or for a few years.

The discovery comes from examining two outcrops, called “Hottah” and “Link,” with the telephoto capability of Curiosity’s mast camera during the first 40 days after landing. Those observations followed up on earlier hints from another outcrop, which was exposed by thruster exhaust as Curiosity, the Mars Science Laboratory Project’s rover, touched down.

“Hottah looks like someone jack-hammered up a slab of city sidewalk, but it’s really a tilted block of an ancient streambed,” said Mars Science Laboratory Project Scientist John Grotzinger of the California Institute of Technology in Pasadena. The gravels in conglomerates at both outcrops range in size from a grain of sand to a golf ball. Some are angular, but many are rounded.

This image from NASA’s Curiosity Rover shows a high-resolution view of an area that is known as Goulburn Scour, a set of rocks blasted by the engines of Curiosity’s descent stage on Mars. Image Credit: NASA/JPL-Caltech/MSSS

The science team may use Curiosity to learn the elemental composition of the material, which holds the conglomerate together, revealing more characteristics of the wet environment that formed these deposits. The stones in the conglomerate provide a sampling from above the crater rim, so the team may also examine several of them to learn about broader regional geology.

The slope of Mount Sharp in Gale Crater remains the rover’s main destination. Clay and sulfate minerals detected there from orbit can be good preservers of carbon-based organic chemicals that are potential ingredients for life.

This image shows exposed bedrock made up of smaller fragments cemented together, or what geologists call a sedimentary conglomerate. Broken surfaces of the outcrop have rounded, gravel clasts, such as the one circled in white, which is about 1.2 inches (3 centimeters) across. Erosion of the outcrop results in gravel clasts that protrude from the outcrop and ultimately fall onto the ground, creating the gravel pile at left. Image Credit: NASA/JPL-Caltech/MSSS

During the two-year prime mission of the Mars Science Laboratory, researchers will use Curiosity’s 10 instruments to investigate whether areas in Gale Crater have ever offered environmental conditions favorable for microbial life. 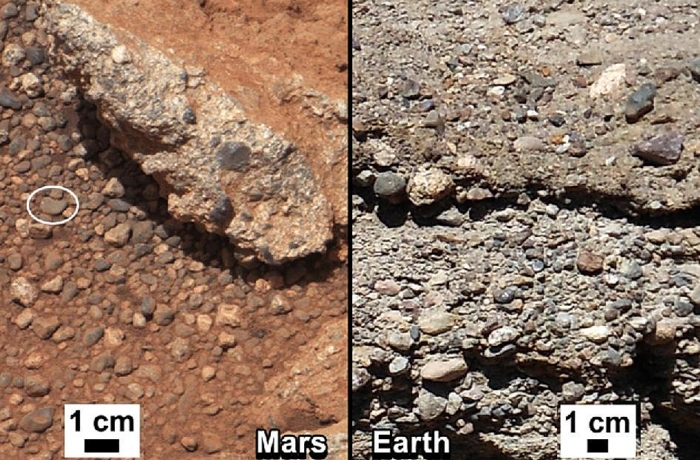 This set of images compares the Link outcrop of rocks on Mars (left) with similar rocks seen on Earth (right). Image Credit: NASA/JPL-Caltech/MSSS and PSI