NASA’s Mars Curiosity has debuted the first recorded human voice that traveled from Earth to another planet and back.

A chapter of the layered geological history of Mars is laid bare in this postcard from NASA’s Curiosity rover. The image shows the base of Mount Sharp, the rover’s eventual science destination. Image Credit: NASA/JPL-Caltech/MSSS

In spoken words radioed to the rover on Mars and back to NASA’s Deep Space Network (DSN) on Earth, NASA Administrator Charles Bolden noted the difficulty of landing a rover on Mars, congratulated NASA employees and the agency’s commercial and government partners on the successful landing of Curiosity earlier this month, and said curiosity is what drives humans to explore.

“The knowledge we hope to gain from our observation and analysis of Gale Crater will tell us much about the possibility of life on Mars as well as the past and future possibilities for our own planet. Curiosity will bring benefits to Earth and inspire a new generation of scientists and explorers, as it prepares the way for a human mission in the not too distant future,” Bolden said in the recorded message.

The voice playback was released along with new telephoto camera views of the varied Martian landscape during a news conference yesterday at NASA’s Jet Propulsion Laboratory (JPL), Pasadena, Calif.

Members of NASA’s Mars Science Laboratory mission listen to a voice message from NASA Administrator Charles Bolden in the mission support area at the Jet Propulsion Laboratory. The message, which had been sent to Mars and back, was played for the team on Aug. 27, 2012. Video Credit: NASA/JPL-CalTec/MSSS

The following statement by NASA Administrator Charles Bolden was returned to Earth via the Mars Curiosity rover:

Hello. This is Charlie Bolden, NASA Administrator, speaking to you via the broadcast capabilities of the Curiosity Rover, which is now on the surface of Mars.

Since the beginning of time, humankind’s curiosity has led us to constantly seek new life…new possibilities just beyond the horizon. I want to congratulate the men and women of our NASA family as well as our commercial and government partners around the world, for taking us a step beyond to Mars.

This is an extraordinary achievement. Landing a rover on Mars is not easy – others have tried – only America has fully succeeded. The investment we are making…the knowledge we hope to gain from our observation and analysis of Gale Crater, will tell us much about the possibility of life on Mars as well as the past and future possibilities for our own planet. Curiosity will bring benefits to Earth and inspire a new generation of scientists and explorers, as it prepares the way for a human mission in the not too distant future.

“With this voice, another small step is taken in extending human presence beyond Earth, and the experience of exploring remote worlds is brought a little closer to us all,” said Dave Lavery, NASA Curiosity program executive. “As Curiosity continues its mission, we hope these words will be an inspiration to someone alive today who will become the first to stand upon the surface of Mars. And like the great Neil Armstrong, they will speak aloud of that next giant leap in human exploration.” This image is from a test series used to characterize the 100-millimeter Mast Camera on NASA’s Curiosity rover. It was taken on Aug. 23, 2012, and looks south-southwest from the rover’s landing site. The gravelly area around Curiosity’s landing site is visible in the foreground. Farther away, about a third of the way up from the bottom of the image, the terrain falls off into a depression (a swale). Beyond the swale, in the middle of the image, is the boulder-strewn, red-brown rim of a moderately-sized impact crater. Farther off in the distance, there are dark dunes and then the layered rock at the base of Mount Sharp. Some haze obscures the view, but the top ridge, depicted in this image, is 10 miles (16.2 kilometers) away. Image Credit: NASA/JPL-Caltech/MSSS

The telephoto images beamed back to Earth show a scene of eroded knobs and gulches on a mountainside, with geological layering clearly exposed. The new views were taken by the 100-millimeter telephoto lens and the 34-milllimeter wide angle lens of the Mast Camera (Mastcam) instrument. Mastcam has photographed the lower slope of the nearby mountain called Mount Sharp.

“This is an area on Mount Sharp where Curiosity will go,” said Mastcam principal investigator Michael Malin, of Malin Space Science Systems in San Diego. “Those layers are our ultimate objective. The dark dune field is between us and those layers. In front of the dark sand you see redder sand, with a different composition suggested by its different color. The rocks in the foreground show diversity — some rounded, some angular, with different histories. This is a very rich geological site to look at and eventually to drive through.”

A drive early Monday placed Curiosity directly over a patch where one of the spacecraft’s landing engines scoured away a few inches of gravelly soil and exposed underlying rock. Researchers plan to use a neutron-shooting instrument on the rover to check for water molecules bound into minerals at this partially excavated target. 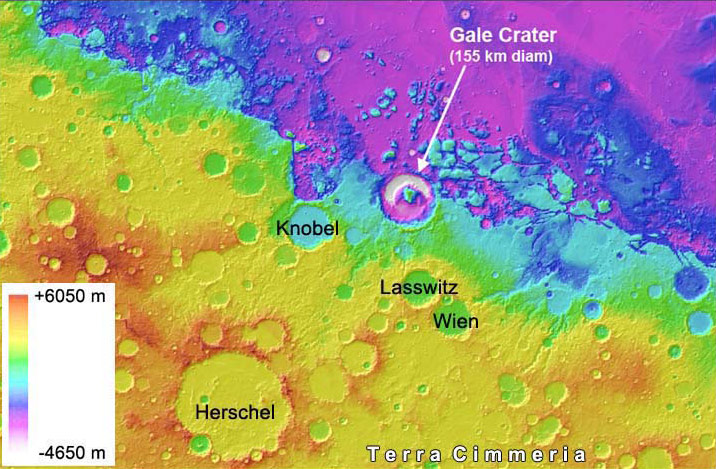 Gale Crater on Mars, where NASA’s Curiosity rover has landed, belongs to a family of large, very old craters shown here on this elevation map. It has one of the lowest elevations among this family. Image Credit: NASA/JPL-Caltech

During the news conference, the rover team reported the results of a test on Curiosity’s Sample Analysis at Mars (SAM) instrument, which can measure the composition of samples of atmosphere, powdered rock or soil. The amount of air from Earth’s atmosphere remaining in the instrument after Curiosity’s launch was more than expected, so a difference in pressure on either side of tiny pumps led SAM operators to stop pumping out the remaining Earth air as a precaution. The pumps subsequently worked, and a chemical analysis was completed on a sample of Earth air.

“As a test of the instrument, the results are beautiful confirmation of the sensitivities for identifying the gases present,” said SAM principal investigator Paul Mahaffy of NASA’s Goddard Space Flight Center in Greenbelt, Md. “We’re happy with this test and we’re looking forward to the next run in a few days when we can get Mars data.”

Curiosity already is returning more data from the Martian surface than have all of NASA’s earlier rovers combined.

“We have an international network of telecommunications relay orbiters bringing data back from Curiosity,” said JPL’s Chad Edwards, chief telecommunications engineer for NASA’s Mars Exploration Program. “Curiosity is boosting its data return by using a new capability for adjusting its transmission rate.”

Curiosity is 3 weeks into a two-year prime mission on Mars. It will use 10 science instruments to assess whether the selected study area ever has offered environmental conditions favorable for microbial life.