On Earth, life leaves tell-tale signals in the atmosphere. Photosynthesis is ultimately responsible for the high oxygen levels and the thick ozone layer. Microbes emit methane and nitrous oxide into the atmosphere, and seaweeds emit chloromethane gas. These chemicals, when present in sufficient quantities, are indicators of life and are known as atmospheric biomarkers. Detecting them in the atmosphere of an exoplanet should, in theory, be a means of discovering whether life exists on any alien worlds. 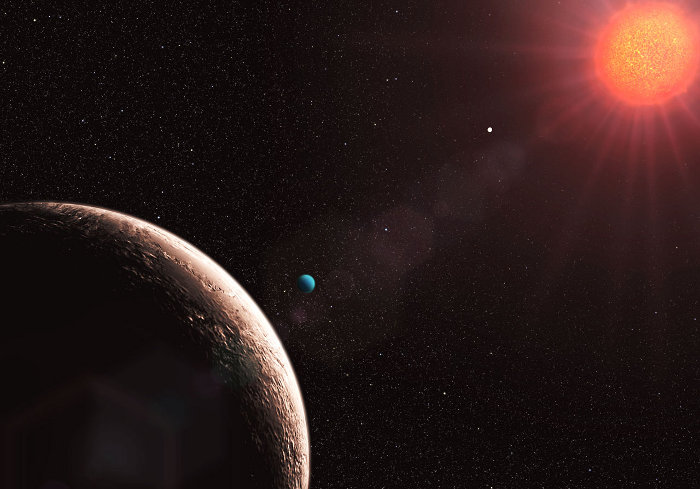 While biomarkers have never been spotted in observations of an exoplanet, because their signal is so faint, the new generation of telescopes being planned today, such as the European Extremely Large Telescope, may be sensitive enough to detect them. New research presented to the European Planetary Science Congress at UCL by Lee Grenfell (DLR) aims to explore how such biomarkers might be detected in future.

“The main aim of our work is to assess the possible range of biomarker signals that might be detected by future telescopes,” Grenfell explains. “To do this, we developed computer models of exoplanets which simulate the abundances of different biomarkers and the way they affect the light shining through a planet’s atmosphere.”

Chemicals in a planet’s atmosphere affect light that passes through it, leaving characteristic chemical fingerprints in the star’s spectrum. Using this technique, astronomers have already deduced a wealth of information about the conditions present in (large, hot) exoplanets. Biomarkers would be detected in much the same way, but here the signal is expected to be so weak that scientists will need a solid understanding based on theoretical models before they can hope to decipher the actual data.

“In our simulations, we modelled an exoplanet similar to the Earth, which we then placed in different orbits around stars, calculating how the biomarker signals respond to differing conditions,” Grenfell explains. “We focused on red dwarf stars, which are smaller and fainter than our Sun, since we expect any biomarker signals from planets orbiting such stars to be easier to detect.”

For detections of the biomarker ozone, the team confirms that there appears to be a ‘Goldilocks’ effect when it comes to the amount of ultraviolet radiation from the star to which the planet is exposed. With weak UV radiation, less ozone is produced in the atmosphere and its detection is challenging. Too much UV leads to increased heating in the middle atmosphere that weakens the vertical gradient and destroys the signal. At intermediate UV, the conditions are ‘just right’ for detecting ozone.

“We find that variations in the UV emissions of red dwarf stars have a potentially large impact on atmospheric biosignatures in simulations of Earth-like exoplanets. Our work emphasizes the need for future missions to characterise the UV emissions of this type of star,” said Grenfell.

There are other limitations on using this method to detect signs of life. For example, it is assuming that any life-bearing planets would be identical to Earth, which is not guaranteed. Moreover, scientists will have to be certain that apparent biomarker signals they find truly arose from life, and not from other, non-living processes. Finally, dim red dwarf stars may not be the most suitable for the onset and maintenance of life. Nevertheless, this technique is an extremely promising one for detecting potential signs of life on alien worlds.

Grenfell concludes: “For the first time we are reaching a point where serious scientific debate can be applied to address the age-old question: are we alone?”

This research has been submitted to the journal Planetary & Space Science (2013) “Planetary Evolution and Life” Special Issue.