News by Subject » Astrophysics » Distant, Massive Star is About to Explode

An international team of astronomers has observed part of the final death throes of the largest known star in the Universe as it throws off its outer layers. The discovery, by a collaboration of scientists from the UK, Chile, Germany and the USA, is a vital step in understanding how massive stars return enriched material to the interstellar medium – the space between stars – which is necessary for forming planetary systems. The researchers publish their results in the Oxford University Press journal Monthly Notices of the Royal Astronomical Society. 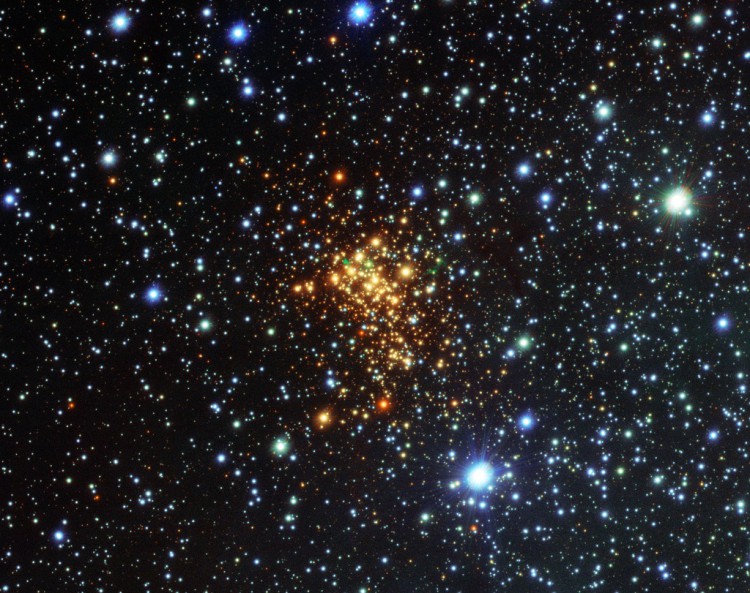 The new VST image of the star cluster Westerlund 1, which lies about 16,000 light-years from Earth in the southern constellation of Ara (the Altar). It contains hundreds of very massive and brilliant stars, all of which are just a few million years old. The stars in the cluster appear red due to foreground dust blocking out their blue light. The blue stars are foreground objects and are not related to the cluster. The red supergiant star W26 that probably will soon explode as a supernova is in the upper left of the cluster and is surrounded by a green glow. Image Credit: ESO/VPHAS+ Survey/N. Wright

Stars with masses tens of times larger than that of the Sun live very short and dramatic lives compared to their less massive siblings. Some of the most massive stars have lifetimes of less than a few million years before they exhaust their nuclear fuel and explode as supernovae. At the very ends of their lives these stars become highly unstable and eject a considerable amount of material from their outer envelopes. This material has been enriched by nuclear reactions deep within the star and includes many of the elements necessary for forming rocky planets like our Earth, such as silicon and magnesium, and which are also the basis for life. How this material is ejected and how this affects the evolution of the star is however still a mystery.

Using the Very Large Telescope Survey Telescope (VST) at the European Southern Observatory’s Paranal Observatory in Chile an international team of astronomers has been surveying our Galaxy using a special filter to detect nebulae of ionized hydrogen. The VST Photometric H-Alpha Survey (VPHAS) has been searching our Galaxy for ejected material from evolved stars and when the team observed the super star cluster Westerlund 1 they made a remarkable discovery.

Westerlund 1 is the most massive cluster of stars in our Galaxy, home to several hundred of thousand stars, and is the closest analogue to some of the truly massive star clusters seen in distant galaxies. The cluster is about 16,000 light years from Earth in the southern constellation of Ara (the Altar), but our view of the cluster is hampered by gas and dust that makes it appear comparatively dim in visible light.

When the astronomers studied the images of Westerlund 1 they spotted something truly unique. Around one of the stars, known as W26, they saw a huge cloud of glowing hydrogen gas, shown as green in this image. Such glowing clouds are ionized, meaning that the electrons have been stripped away from the atoms of hydrogen gas.

Clouds of this type are rarely found around massive stars and are even rarer around red supergiant stars such as W26 — this is the first ionized nebula ever discovered around such a star. W26 itself would be too cool to make the gas glow; the astronomers speculate that the source of the ionizing radiation may be either hot blue stars elsewhere in the cluster, or possibly a fainter, but much hotter, companion star to W26. The fact that the nebula is ionized will make it considerably easier to study in the future than if it were not ionized.

On investigating the star W26 in more detail the researchers realized that the star is probably the largest star ever discovered, with a radius 1500 times larger than the Sun and is also one of the most luminous red supergiants known. Such large and luminous massive stars are believed to be highly evolved, all of which suggests that W26 is coming towards the end of its life and will eventually explode as a supernova.

The nebula observed around W26 is very similar to the nebula surrounding SN1987A, the remnant of a star that exploded as a supernova in 1987. SN1987A was the closest observed supernova to Earth since 1604 and as such it gave astronomers a chance to better study the properties of these explosions. Studying objects like the new nebula around W26 will help astronomers to understand the mass loss processes around these massive stars, which eventually lead to their explosive demise.

The paper will be published online in the next few days and will then be available at http://dx.doi.org/10.1093/mnras/slt127