News by Subject » Astrobiology & The Search for Life » Does Little Methane on Mars Mean It Was Never Habitable?

NASA’s car-sized rover, Curiosity, has taken significant steps toward understanding how Mars may have lost much of its original atmosphere. 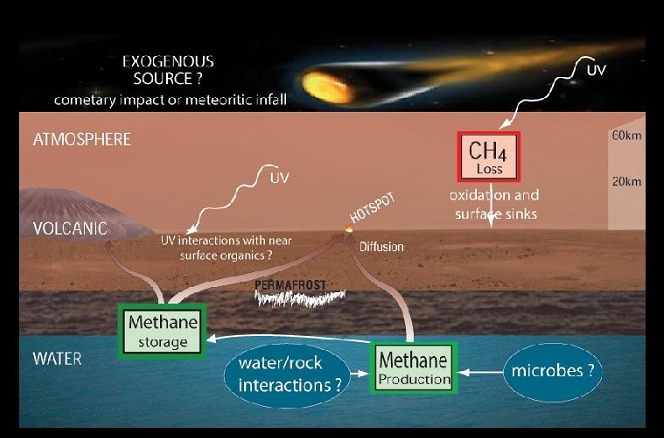 If the atmosphere of Mars contains methane, various possibilities have been proposed for where the methane could come from and how it could disappear.  Potential non-biological sources for methane on Mars include comets, degradation of interplanetary dust particles by ultraviolet light, and interaction between water and rock. A potential biological source would be microbes, if microbes have ever lived on Mars. Potential sinks for removing methane from the atmosphere are photochemistry in the atmosphere and loss of methane to the surface.  Image Credit: NASA/JPL-Caltech, SAM/GSFC

Learning what happened to the Martian atmosphere will help scientists assess whether the planet ever was habitable. The present atmosphere of Mars is 100 times thinner than Earth’s.

A set of instruments aboard the rover has ingested and analyzed samples of the atmosphere collected near the “Rocknest” site in Gale Crater where the rover is stopped for research. Findings from the Sample Analysis at Mars (SAM) instruments suggest that loss of a fraction of the atmosphere, resulting from a physical process favoring retention of heavier isotopes of certain elements, has been a significant factor in the evolution of the planet. Isotopes are variants of the same element with different atomic weights.

This graph shows the percentage abundance of five gases in the atmosphere of Mars, as measured by the Quadrupole Mass Spectrometer instrument of the Sample Analysis at Mars instrument suite on NASA’s Mars rover in October 2012. Image Credit: NASA/JPL-Caltech, SAM/GSFC

Initial SAM results show an increase of 5 percent in heavier isotopes of carbon in the atmospheric carbon dioxide compared to estimates of the isotopic ratios present when Mars formed. These enriched ratios of heavier isotopes to lighter ones suggest the top of the atmosphere may have been lost to interplanetary space. Losses at the top of the atmosphere would deplete lighter isotopes. Isotopes of argon also show enrichment of the heavy isotope, matching previous estimates of atmosphere composition derived from studies of Martian meteorites on Earth.

Scientists theorize that in Mars’ distant past its environment may have been quite different, with persistent water and a thicker atmosphere. NASA’s Mars Atmosphere and Volatile Evolution, or MAVEN, mission will investigate possible losses from the upper atmosphere when it arrives at Mars in 2014. The plot on the left shows new results from the Sample Analysis at Mars, or SAM, instrument on NASA’s Curiosity rover. Image Credit: NASA/JPL-Caltech

With these initial sniffs of Martian atmosphere, SAM also made the most sensitive measurements ever to search for methane gas on Mars. Preliminary results reveal little to no methane. Methane is of interest as a simple precursor chemical for life. On Earth, it can be produced by either biological or non-biological processes.

Methane has been difficult to detect from Earth or the current generation of Mars orbiters because the gas exists on Mars only in traces, if at all. The Tunable Laser Spectrometer (TLS) in SAM provides the first search conducted within the Martian atmosphere for this molecule. The initial SAM measurements place an upper limit of just a few parts methane per billion parts of Martian atmosphere, by volume, with enough uncertainty that the amount could be zero. 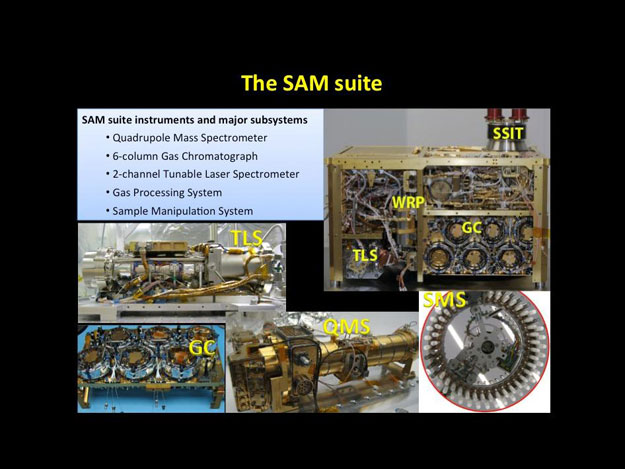 The Sample Analysis at Mars (SAM) instrument, largest of the 10 science instruments for NASA’s Mars Science Laboratory mission, examines samples of Martian rocks, soil and atmosphere for information about chemicals that are important to life and other chemical indicators about past and present environments. Image Credit: NASA/JPL-Caltech

“Methane is clearly not an abundant gas at the Gale Crater site, if it is there at all. At this point in the mission we’re just excited to be searching for it,” said SAM TLS lead Chris Webster of NASA’s Jet Propulsion Laboratory (JPL) in Pasadena, Calif. “While we determine upper limits on low values, atmospheric variability in the Martian atmosphere could yet hold surprises for us.”

In Curiosity’s first three months on Mars, SAM has analyzed atmosphere samples with two laboratory methods. One is a mass spectrometer investigating the full range of atmospheric gases. The other, TLS, has focused on carbon dioxide and methane. During its two-year prime mission, the rover also will use an instrument called a gas chromatograph that separates and identifies gases. The instrument also will analyze samples of soil and rock, as well as more atmosphere samples.

“With these first atmospheric measurements we already can see the power of having a complex chemical laboratory like SAM on the surface of Mars,” said SAM Principal Investigator Paul Mahaffy of NASA’s Goddard Space Flight Center in Greenbelt, Md. “Both atmospheric and solid sample analyses are crucial for understanding Mars’ habitability.”

SAM is set to analyze its first solid sample in the coming weeks, beginning the search for organic compounds in the rocks and soils of Gale Crater. Analyzing water-bearing minerals and searching for and analyzing carbonates are high priorities for upcoming SAM solid sample analyses.

Researchers are using Curiosity’s 10 instruments to investigate whether areas in Gale Crater ever offered environmental conditions favorable for microbial life.