An international team of researchers from the National Astronomical Observatory of Japan (NAOJ) and the Japanese universities of Kobe, Hyogo, and Saitama used the Subaru Telescope to capture a clear image of the protoplanetary disk of the star UX Tauri A. The team’s subsequent, detailed study of the disk’s characteristics suggests that its dust particles are large in size and non-spherical in shape. This exciting result shows that these dust grains are colliding with and adhering to each other, a process that will lead to their eventual formation into planets.

A major goal of the SEEDS Project (Note 1) is to explore hundreds of nearby stars in an effort to directly image exoplanets and protoplanetary/debris disks. As part of this important project, the current team of researchers used the Subaru High Contrast Instrument for the Subaru Next Generation Adaptive Optics (HiCIAO) mounted on the Subaru Telescope to observe UX Tau A, a young star in the constellation Taurus’s molecular cloud or “stellar nursery”, where many lower mass stars are being born. They were able to detect the disk of gas and dust around the star, its “circumstellar disk”, which is then referred to as a protoplanetary disk when it is a site of planet formation.

The team made a detailed study of UX Tau A in the near-infrared wavelengths. They measured the polarization (Note 2) of infrared light to find out the distribution of the dust particles that scattered the infrared light. Polarized light reflected from dust particles gives important information about planetary formation in disks. Even though dust particles only make up a tiny fraction of the protoplanetary disk, they can develop into planetesimals (solid objects less than a kilometer in diameter), and eventually, planets.

The light from this disk is strongly polarized; its angle of polarization shows a concentric pattern relative to the central star. Yoichi Itoh (University of Hyogo) expressed his surprise: “The objects we have observed so far show a high degree of polarization no matter what the angle is. However, the polarization of this particular object ranges widely from 2 to 66 % as the polarization angle changes. It was a pleasant challenge to explain this characteristic.” 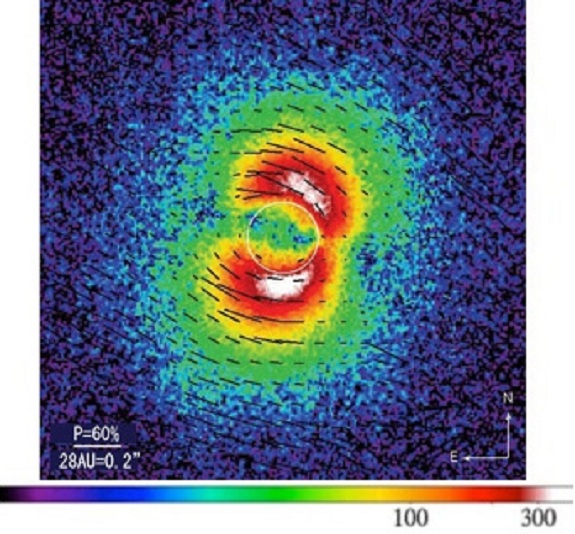 This is a near-infrared intensity image of UX Tau A. White is the brightest, and then red. The background is dark blue. The disk is slightly elongated in the north-south direction (top to bottom in the figure). Its west side (on the right) is a little brighter than its east side; this indicates that the inclination of the disk is in the east-west direction and that its west side is closer to the observer. Image Credit: NAOJ

Dust particles in the protoplanetary disk originally came from interstellar space and are only 0.1 microns in size. Small grain particles, which are much smaller than the observed wavelength, can produce a high degree of polarization regardless of their location. If the grain size is similar to the observed wavelength, the scattering performance is different. However, these principles do not account for the current observation. Itoh explained, “Only particles with a non-spherical shape and a size of 30 microns, which is much larger than the near-infrared wavelength that was used for the observation, can explain the features of our observation.”

How did this happen? Dust in the disk of UX Tau A collided and stuck together to grow to 30 microns. The researchers were fortunate to witness dust particles at a critical phase in their path to becoming a fully-grown planet in the protoplanetary disk.

The research paper entitled “High-Resolution Near-Infrared Polarimetry of a Circumstellar Disk around UX Tau A” by Tanii et al. is scheduled to be published in the Publications of the Astronomical Observatory of Japan in December 2012.

1) SEEDS. The Subaru Strategic Exploration of Exoplanets and Disks with HiCIAO/AO 188 Project began in 2009 for a five-year period using 120 observing nights at the Subaru Telescope, located at the summit of Mauna Kea on the island of Hawaii. Principal investigator Motohide Tamura (NAOJ) leads the project.

2) Polarization. Light has characteristics of both particles and waves. A special detection method such as the polarized light measurement reveals its characteristics as a wave. When the light scatters or reflects off of the material of the target object, the outgoing light has a certain polarization angle. Therefore, the polarization measurement of the disk gives clues about the surface condition of the grain particles that reflect light from the central star.