Planets form in disks of gas and dust around a star in the making, but when and how such protoplanetary disks form is still a mystery. Now, by using the ALMA radio telescope, a team of astronomers, led by the Leiden PhD student Nadia Murillo and professor Ewine Dishoeck, has found the youngest protoplanetary disk around a protostar ever. This disk is younger than is considered possible based on most models. 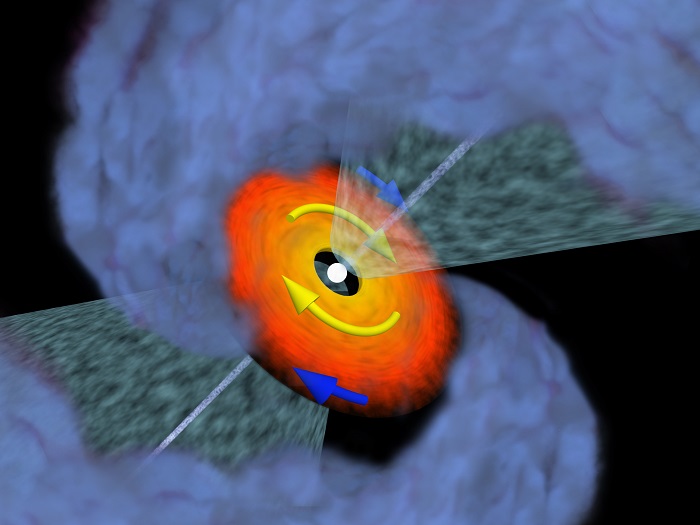 Matter in our Solar System moves according to the laws of Kepler; the inner planets orbit around our Sun faster than the planets in the outer regions. This phenomenon is called Keplerian rotation. Likely, planets with stable orbits form in Keplerian disks. Discoveries of such disks, when the protostar is still deeply hidden in the cloud where it was born, provide insight into the formation process of planets.

The team of astronomers has used ALMA to study the triple-protostellar system VLA1623 which is located in the star-forming cloud Rho Ophiuchus (the Serpent Bearer). In the direction of VLA1623A, a young object that is still being enveloped in a dense cocoon of dust and gas, a disk structure has been observed. By using ALMA it has now been found that the movement of the gas in the disk is keplerian. Its radius is about 5 times as large as the radius of the orbit of Neptune, but with a central protostar that is 5 times less massive than our Sun. This shows that the baby star is very young and is still growing.

Models and simulations predict that Keplerian disks can’t form in the earliest stages of star formation. However, VLA1623A’s large Keplerian disk proves the contrary. This discovery suggests that other factors may play a role in the formation of protoplanetary disks. This corresponds to recent research suggests that a misalignment of the magnetic field and the axes of rotation, or turbulence, favors the formation of disks. Due to this, disks with a radius of 100 or more times the distance Earth-Sun may form. The recent evidence that almost all the stars, including multiple systems, have at least one planet is consistent with this new result, which shows that nature finds a way to form stable planetary systems.