News by Subject » Astrophysics » Evidence for Exoplanet Under Construction Uncovered

This news item was released during my holiday. You probably heard of it, but in the case you didn’t, here it is.

Astronomers using NASA’s Hubble Space Telescope have found compelling evidence of a planet forming 7.5 billion miles away from its star, a finding that may challenge current theories about planet formation.

Of the almost 900 planets outside our Solar System that have been confirmed to date, this is the first to be found at such a great distance from its star. The suspected planet is orbiting the diminutive red dwarf TW Hydrae, a popular astronomy target located 176 light-years away from Earth in the constellation Hydra, the Sea Serpent.

Hubble’s keen vision detected a mysterious gap in a vast protoplanetary disk of gas and dust swirling around TW Hydrae. The gap is 1.9 billion miles wide and the disk is 41 billion miles wide. The gap’s presence likely was caused by a growing, unseen planet that is gravitationally sweeping up material and carving out a lane in the disk, like a snow plow.

The planet is estimated to be relatively small, at 6 to 28 times more massive than Earth. Its wide orbit means it is moving slowly around its host star. If the suspected planet were orbiting in our Solar System, it would be roughly twice Pluto’s distance from the Sun.

Planets are thought to form over tens of millions of years. The buildup is slow, but persistent as a budding planet picks up dust, rocks, and gas from the protoplanetary disk. A planet 7.5 billion miles from its star should take more than 200 times longer to form than Jupiter did (no more than 10 million years by current estimates) at its distance of 500 million miles (800 million kilometers) from the Sun because of its much slower orbital speed and the deficiency of material in the disk. 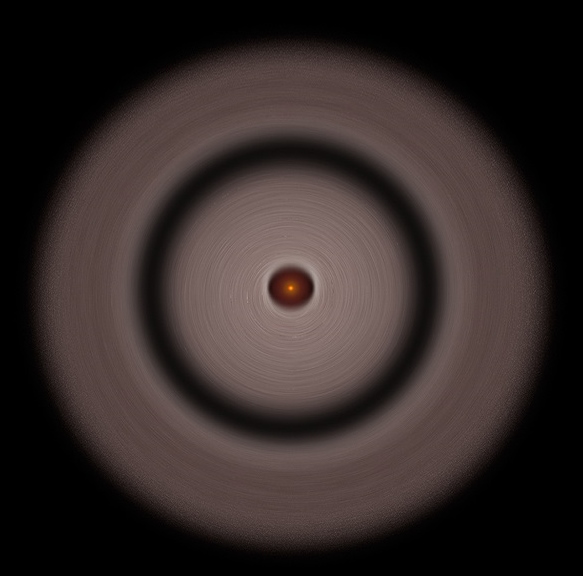 An Artist’s Illustration of the TW Hydrae Disk. Image Credit: NASA, ESA, and A. Feild (STScI/AURA)

TW Hydrae is only 8 million years old, making it an unlikely star to host a planet, according to this theory. There has not been enough time for a planet to grow through the slow accumulation of smaller debris. Complicating the story further is that TW Hydrae is only 55 percent as massive as our Sun.

“It’s so intriguing to see a system like this,” said John Debes of the Space Telescope Science Institute in Baltimore, Md. Debes leads a research team that identified the gap. “This is the lowest-mass star for which we’ve observed a gap so far out.”

An alternative planet-formation theory suggests that a piece of the disk becomes gravitationally unstable and collapses on itself. In this scenario, a planet could form more quickly, in just a few thousand years.

“If we can actually confirm that there’s a planet there, we can connect its characteristics to measurements of the gap properties,” Debes said. “That might add to planet formation theories as to how you can actually form a planet very far out.”

This illustration shows that the TW Hydrae protoplanetary disk is much wider than the size of our solar system. In fact, the gap in the TW Hydrae disk produced by a suspected planet resides 7.5 billion miles from the star. At this distance, the putative planet would orbit far beyond our Kuiper Belt, a reservoir of icy, leftover material from the formation of our solar system. Image Credit: NASA, ESA, and A. Feild (STScI)

The TW Hydrae disk also lacks large dust grains in its outer regions. Observations from the Atacama Large Millimeter Array in the Atacama desert of northern Chile, show dust grains roughly the size of a grain of sand are not present beyond about 5.5 billion miles (8.85 billion kilometers) from the star, just short of the gap.

“Typically, you need pebbles before you can have a planet. So, if there is a planet and there is no dust larger than a grain of sand farther out, that would be a huge challenge to traditional planet formation models,” Debes said.

The team used Hubble’s Near Infrared Camera and Multi-Object Spectrometer (NICMOS) to observe the star in near-infrared light. The researchers then compared the NICMOS images with archival Hubble data and optical and spectroscopic observations from Hubble’s Space Telescope Imaging Spectrograph (STIS). Debes said researchers see the gap at all wavelengths, which indicates it is a structural feature and not an illusion caused by the instruments or scattered light.

The team’s paper has appeared online on June 14 in The Astrophysical Journal.

For former news on TW Hydrae and its protoplanetary disk, click here.