News by Subject » Astrobiology & The Search for Life » Evidence There Once Was Water on the Surface of Mars!

Scientists at the University of Glasgow together with the Scottish Universities Environmental Research Centre and the Natural History Museum (London) have discovered the first evidence of water dissolving the surface of Mars. 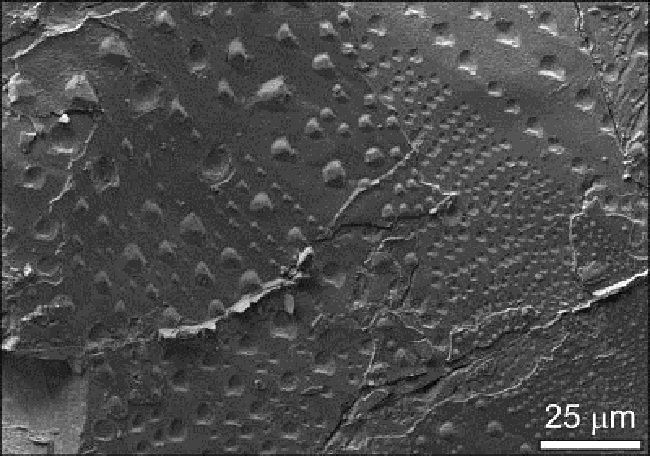 The etch pits on the Nakhla meteorite sample which the team examined. Image Credit: Univ. of Glasgow

In a paper published in the Meteoritical Society’s journal MAPS, the research team outline the results of tests on a 1.7-gram fragment of a Martian meteorite known as Nakhla, which was provided by the Natural History Museum.

Nakhla, named after the town in Egypt where it landed in 1911 after being blasted from the surface of Mars by a massive impact around 10 million years ago, has been studied for decades by scientists around the world.

Previous research on Nakhla has provided evidence of the existence of water on Mars through the presence in the meteorite of ‘secondary minerals’ – types of carbonates, hydrous silicates and sulfates most likely formed when Martian minerals reacted with liquid water.

Professor Martin Lee of the University’s School of Geographical and Earth Sciences, lead author of the paper, said: “What has been unclear in the past is exactly where the chemical elements which made up the secondary minerals within Nakhla came from.

“Using a scanning electron microscope, we examined many tiny bowl-shaped depressions, known as etch pits, in grains of the minerals olivine and augite found in the meteorite.

“What we’ve found for the first time is evidence that the etch pits were created when water dissolved the olivine and augite, and that the elements released from those minerals led to the formation of the secondary minerals.

“It’s an exciting discovery and better informs of our understanding of how water affected rock on Mars.”

By examining the amount of dissolution which occurred in the etch pits formed within the minerals, the team have also been able to estimate how long the water was present within the sample.

Professor Lee added: “From the amount of dissolution we observed, it’s likely that this particular piece of Mars was affected by water for only a few months and probably less than a year in total.

“That’s certainly not long enough to sustain a life-supporting biosphere; however, the findings of our study are from a tiny piece of a very small chunk of the surface of Mars, so it’s difficult to draw any large-scale conclusions about the presence of water on the planet or its implications for life.

“Our research does raise fascinating questions about exactly how long ago the water interacted with the part of Mars which Nakhla came from and where the water might have gone. We’ll be continuing to look for clues to the answers to these questions in future research. Results from NASA’s Curiosity rover, currently on the surface of Mars, will also help us build a clearer picture of the history of Martian water.”

The paper, entitled ‘Evidence for silicate dissolution on Mars from the Nakhla meteorite’, is published in MAPS and is available as an early view online publication at http://onlinelibrary.wiley.com/doi/10.1111/maps.12053/pdf

Source: The University of Glasgow