News by Subject » The Solar System » Evolution of the Moon 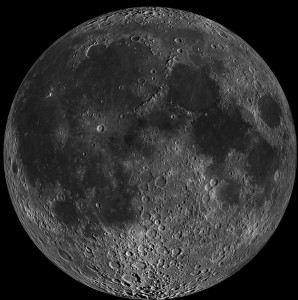 What is the history of the Moon? The Moon was likely created from debris expelled when a Mars-sized object violently impacted the Earth about 4.5 billion years ago. Just after gravitationally condensing, as imagined below, the glowing-hot surface of the Moon cooled and cracked. Rocks large and small continued to impact the surface, including a particularly large impact that created Aitken Basin about 4.3 billion years ago. A Heavy Bombardment period then continued for hundreds of millions of years, creating large basins all over the lunar surface. Over the next few billion years lava flowed into Earth-side basins, eventually cooling into the dark maria we see today. As always, relentless impacts continued, forming the craters we see today, slowly diminishing over the past billion years. Today the cooled Moon we know and love is as dark as coal and always keeps the same face toward Earth. Exactly how the Moon formed initially, and why lunar maria are only on the Earth side, remain active topics of research.