The discovery of planets continues to expand beyond the domain of professional astronomers. A joint effort of amateur astronomers and scientists has led to the first reported case of a planet orbiting a double-star that, in turn, is orbited by a second distant pair of stars. 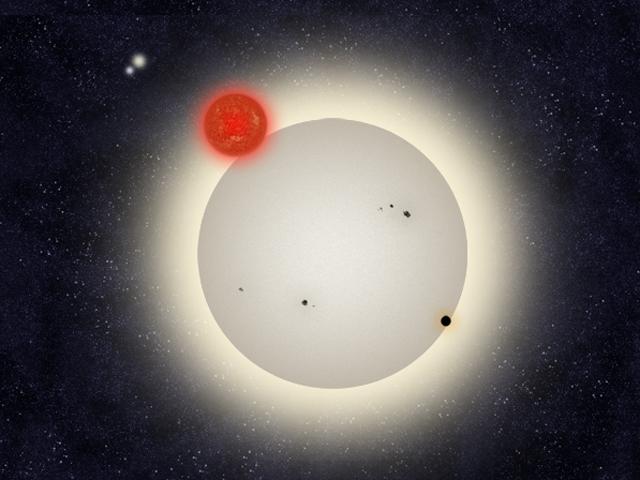 A family portrait of the PH1 planetary system: The newly discovered planet is depicted in this artist’s rendition transiting the larger of the two eclipsing stars it orbits. Off in the distance, well beyond the planet orbit, resides a second pair of stars bound to the planetary system. Image Credit: Haven Giguere/Yale

Aided by volunteers using the Planethunters.org website, a Yale-led international team of astronomers identified and confirmed discovery of the phenomenon, called a circumbinary planet in a four-star system.

Only six planets are known to orbit two stars, according to researchers, and none of these are orbited by distant stellar companions.

“Circumbinary planets are the extremes of planet formation,” said Meg Schwamb of Yale, lead author of a paper about the system presented Oct. 15 at the annual meeting of the Division for Planetary Sciences of the American Astronomical Society in Reno, Nevada. “The discovery of these systems is forcing us to go back to the drawing board to understand how such planets can assemble and evolve in these dynamically challenging environments.”

Dubbed PH1, the planet was first identified by citizen scientists participating in Planet Hunters, a Yale-led program that enlists members of the public to review astronomical data from NASA’s Kepler spacecraft for signs of planets. It is the project’s first confirmed planet discovery.

The volunteers — Kian Jek of San Francisco and Robert Gagliano of Cottonwood, Arizona — spotted faint dips in light caused by the planet as it passed in front of its parent stars, a common method of finding extrasolar planets. Schwamb, a Yale postdoctoral researcher, led the team of professional astronomers that confirmed the discovery and characterized the planet, following observations from the Keck telescopes on Mauna Kea, Hawaii. PH1 is a gas giant with a radius about 6.2 times that of Earth, making it a bit bigger than Neptune. 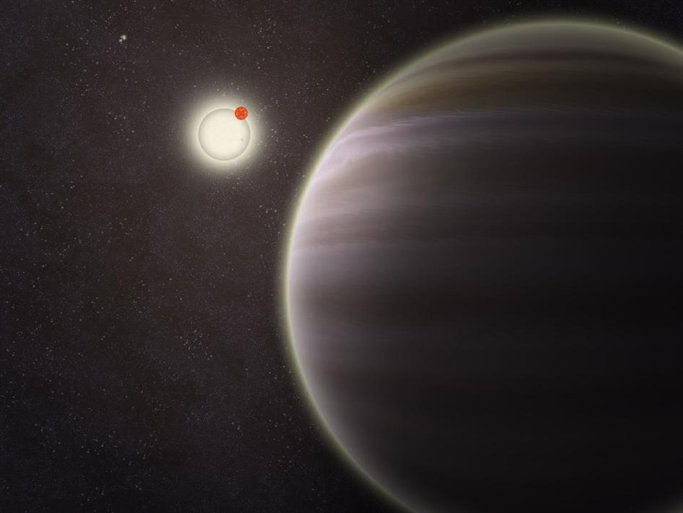 An artist’s illustration of PH1, a planet discovered by volunteers from the Planet Hunters citizen science project. PH1, shown in the foreground, is a circumbinary planet and orbits two suns. Image Credit: Haven Giguere/Yale

“Planet Hunters is a symbiotic project, pairing the discovery power of the people with follow-up by a team of astronomers,” said Debra Fischer, a professor of astronomy at Yale and planet expert who helped launch Planet Hunters in 2010. “This unique system might have been entirely missed if not for the sharp eyes of the public.”

PH1 orbits outside the 20-day orbit of a pair of eclipsing stars that are 1.5 and 0.41 times the mass of the Sun. It revolves around its host stars roughly every 138 days. Beyond the planet’s orbit at about 1000 AU (roughly 1000 times the distance between Earth and the Sun) is a second pair of stars orbiting the planetary system.

“The thousands of people who are involved with Planet Hunters are performing a valuable service,” said coauthor Jerome Orosz, who earned his Ph.D. at Yale in 1996 and is now associate professor of astronomy at San Diego State University. “Many of the automated techniques used to find interesting features in the Kepler data don’t always work as efficiently as we would like. The hard work of the Planet Hunters helps ensure that important discoveries are not falling through the cracks.”

Gagliano, one of the two citizen scientists involved in the discovery, said he was “absolutely ecstatic to spot a small dip in the eclipsing binary star’s light curve from the Kepler telescope, the signature of a potential new circumbinary planet.”

He continued, “It’s a great honor to be a Planet Hunter, citizen scientist, and to work hand-in-hand with professional astronomers, making a real contribution to science.”

Jek expressed wonder at the possibility of the discovery: “It still continues to astonish me how we can detect, let alone glean so much information about another planet thousands of light years away just by studying the light from its parent star.”

The paper is available on the arXiv preprint server and has been submitted to Astrophysical Journal. A team from Johns Hopkins University has been working on a separate paper on aspects of the planetary system.