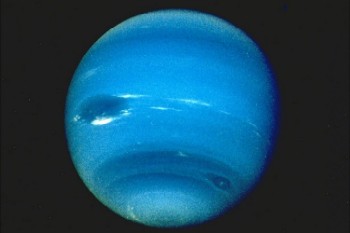 In a challenge to current astrophysical models of the universe, researchers at Sandia National Laboratories Z machine and the University of Rostock in Germany have found that current estimates of ice-giant planetary interiors overstate water’s compressibility by as much as 30 percent.

The work was reported in the paper “Probing the Interior of the Ice Giants” in the Feb. 27 Physical Review Letters.

“Our results question science’s understanding of the internal structure of these planets,” said Sandia lead author Marcus Knudson, “and should require revisiting essentially all the modeling of ice giants within and outside our solar system.”

An accurate estimate of water’s shrinking volume under the huge gravitational pressures of large planets is essential to astrophysicists trying to model the evolution of the universe. They need to assume how much space is taken up by water trapped under high density and pressure, deep inside a planet, to calculate how much is needed of other elements to flesh out the planet’s astronomical image.

To come up with the composition of the so-called ice-giants Neptune and Uranus, as well as any of the ice-giant exoplanets being discovered in distant star systems, astrophysicists begin with the orbit, age, radius and mass of each planet. Then, using equations that describe the behavior of elements as the forming planet cooled, they calculate what light and heavy elements might have contributed to its evolution to end up with the current celestial object.

But if estimates of water volume are off-target, then so is everything else.

The measurements — 10 times more accurate than any previously reported — at Sandia’s Z accelerator agree with results from a modern simulation effort that uses the quantum mechanics of Schroedinger’s wave equation — the fundamental equation of wave mechanics — to predict the behavior of water under extreme pressure and density.

The model, developed through a University of Rostock and Sandia collaboration, is called “First Principles Modeling” because it contains no tuning parameters.

“You’re solving Schroedinger’s equation from a quantum mechanical perspective with hydrogen and oxygen as input; there aren’t any knobs for finagling the result you want or expect,” Knudson said.

The model’s results are quite different from earlier chemical pictures of water’s behavior under pressure, but agree quite well with the Z machine’s test results, said Knudson. These results were achieved by using Z’s magnetic fields to shoot tiny plates 40 times faster than a rifle bullet into a water-sample target a few millimeters away. The impact of each plate into the target created a huge shock wave that compressed the water to roughly one-fourth its original volume, momentarily creating conditions similar to those in the interior of the ice giants.

Sub-nanosecond observations captured the behavior of water under pressures and densities that occur somewhere between the surface and core of ice giants.

“We took advantage of recent, more precise methods to measure the speed of the shock wave moving through the water sample by measuring the Doppler shift of laser light reflected from the moving shock front, to 0.1 percent accuracy,” said Knudson.

The re-shocked state of water was also determined by observing its behavior as the shock wave reflected back into the water from a quartz rear window (its characteristics also determined) in the target. These results provided a direct test of the First Principles model along a thermodynamic path that mimics the path one would follow if one could bore deep into a planet’s interior.

Multiple experiments were performed, providing a series of results at increasing pressures to create an accurate equation of state. Such equations link changes in pressures with changes in temperatures and volumes.

Z can create more pressure — up to 20 megabars — than at Earth’s core (roughly 3.5 megabars), and millions of times Earth’s atmospheric pressure. The Z projectiles, called flyer plates, achieve velocities from 12 to 27 kilometers a second, or up to 60,000 mph. The pressure at the center of Neptune is roughly 8 megabars.

Water at Z’s ice-giant pressures also was found to have reflectivity like that of a weak metal, raising the possibility that water’s charged molecular fragments might be capable of generating a magnetic field. This could help explain certain puzzling aspects of the magnetic fields around Neptune and Uranus.

“Reducing uncertainty on the composition of planetary systems by precisely measuring the equation of state of water at extreme conditions can only help us understand how these systems formed,” Knudson said.

These experimental techniques also are used at Z to study materials of critical importance to the nuclear weapons program. In addition to producing the largest amount of X-rays on Earth when firing, the huge pressures generated by Z make it useful to astrophysicists seeking data similar to that produced by black holes and neutron stars.