New data from the South Pole Telescope indicates that the birth of the first massive galaxies that lit up the early Universe was an explosive event, happening faster and ending sooner than suspected.

The South Pole Telescope recorded temperature fluctuations in the cosmic microwave background, the light left over from the Big Bang, to study the period of cosmological evolution when the first stars and galaxies formed early in the history of the Universe. The image, only a third of which was used for the current analysis, shows variations in millionths of a degree Kelvin. Image Credit: South Pole Telescope Collaboration

Extremely bright, active galaxies formed and fully illuminated the Universe by the time it was 750 million years old, or about 13 billion years ago, according to Oliver Zahn, a postdoctoral fellow at the Berkeley Center for Cosmological Physics (BCCP) at the University of California, Berkeley, who led the data analysis.

The data provide new constraints on the Universe’s first era of galaxy formation, called the Epoch of Reionization. Most astronomers think that early stars came to life in massive gas clouds, generating the first galaxies. The energetic light pumped out by these stars is thought to have ionized the hydrogen gas in and around the galaxies, creating “ionization bubbles” millions of light years across that left a lasting, telltale signature in the cosmic background radiation (CMB). This relic light from the early Universe is visible today everywhere in the sky and was first mapped by UC Berkeley physicist and Nobel laureate George Smoot, founder of the BCCP.

The first epoch of ionization occurred after the Universe was born in the Big Bang. Everything was so hot that all the gas, mostly hydrogen, was ionized. The universe only cooled enough for electrons to latch onto protons to form neutral hydrogen atoms when the Universe was about 400,000 years old. 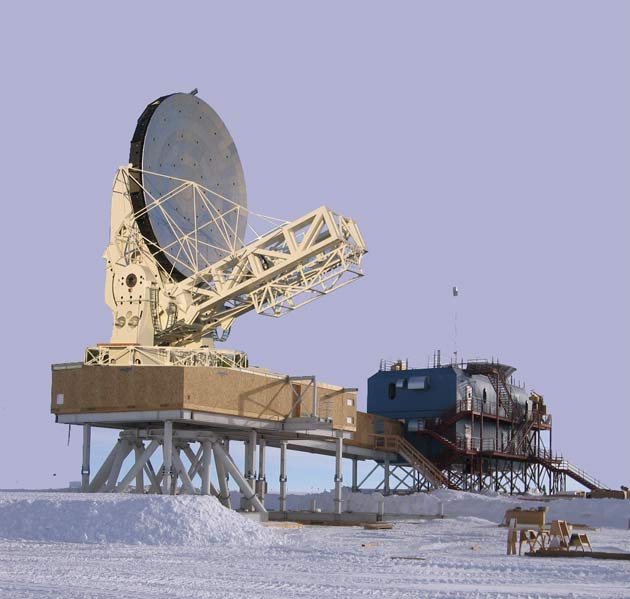 “Studying the Epoch of Reionization is important because it represents one of the few ways by which we can study the first stars and galaxies,” said study co-author John Carlstrom of the University of Chicago.

The epoch’s short duration also suggests that monster galaxies with more than a billion stars played a key role in the reionization, since smaller galaxies would have formed much earlier.

The latest results are based on a new analysis that combines measurements taken by the South Pole Telescope at three frequencies and extends these measurements to a larger area covering approximately 2 percent of the sky. The 10-meter South Pole Telescope operates at millimeter wavelengths to make high-resolution images of the cosmic microwave background and its polarization.

When the new data were combined with earlier data from the WMAP (Wilkinson Microwave Anisotropy Probe) satellite, Zahn, Reichardt and their colleagues were able to put stringent constraints on when the epoch of reionization began, and how long it lasted.

An artist’s interpretation of what the early universe looked like. Image Credit: Adolf Schaller/NASA-MSFC

Zahn said that astronomers were unsure whether they would be able to constrain the Epoch of Reionization using the cosmic background radiation, because of uncertainty over how stars formed, clustered and spewed ionizing radiation into the interstellar medium in the early universe. But over the past decade, various groups, including one at Harvard University that Zahn belonged to as a graduate student, developed models of these processes, and Zahn has used them to work backward to put limits on when the era began and ended.

“In their study of the epoch of reionization, people have been focused on the spectra of distant quasars and galaxies,” said Zahn. “Now the CMB is adding a wealth of information to this field.”

This is only the beginning of what astronomers expect to learn about reionization from the South Pole Telescope, said Reichardt. The current results are based on only the first third of the full telescope survey. Additionally, work is underway to combine the telescope’s maps with ones made with the Herschel satellite to further increase the sensitivity to the reionization signal.

“We expect to measure the duration of reionization to less than 50 million years with the current survey,” Reichardt said. “With planned upgrades to the instrument, we hope to improve this even further in the next five years.”

The 75-foot-tall South Pole Telescope at the Amundsen-Scott South Pole station in Antarctica was specifically designed to detect signals of reionization in the Cosmic Microwave Background, and allow astronomers to measure the extent of the partially ionized phase. The signal came from cosmic background radiation interacting with electrons in the ionization bubbles, which created small hot and cold spots in the CMB based on whether a bubble was moving toward or away from us.

Zahn and UC Berkeley post-doctoral fellow Christian Reichardt, along with colleagues at the University of Chicago, which operates the telescope, have reported their findings in the Sept. 1 print edition of The Astrophysical Journal.