Researchers at The University of Auckland have proposed a new method for finding Earth-like planets and they anticipate that the number will be in the order of 100 billion. 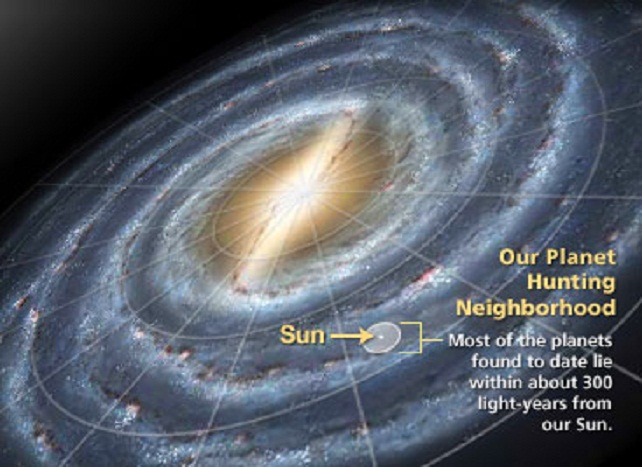 Most of the discovered extrasolar planets lie within 300 light-years of the Solar System. Image Credit: NASA/JPL

Lead author Dr Phil Yock from the University of Auckland’s Department of Physics explains that the work will require a combination of data from microlensing and the NASA Kepler space telescope.

“Kepler finds Earth-sized planets that are quite close to parent stars, and it estimates that there are 17 billion such planets in the Milky Way. These planets are generally hotter than Earth, although some could be of a similar temperature (and therefore habitable) if they’re orbiting a cool star called a red dwarf.”

“Our proposal is to measure the number of Earth-mass planets orbiting stars at distances typically twice the Sun-Earth distance. Our planets will therefore be cooler than the Earth. By interpolating between the Kepler and MOA results, we should get a good estimate of the number of Earth-like, habitable planets in the Galaxy. We anticipate a number in the order of 100 billion.”

“Of course, it will be a long way from measuring this number to actually finding inhabited planets, but it will be a step along the way.”

The first planet orbiting a Sun-like star was not found until 1995, despite strenuous efforts by astronomers. Dr Yock explains that this reflects the difficulty of detecting from a distance a tiny non-luminous object like Earth orbiting a bright object like the Sun. The planet is lost in the glare of the star, so indirect methods of detection must be used.

In recent years, microlensing has been used to detect several planets as large as Neptune and Jupiter. Dr Yock and colleagues have proposed a new microlensing strategy for detecting the tiny deflection caused by an Earth-sized planet. Simulations carried out by Dr Yock and his colleagues – students and former students from The University of Auckland and France – showed that Earth-sized planets could be detected more easily if a worldwide network of moderate-sized, robotic telescopes was available to monitor them.

Coincidentally, just such a network of 1m and 2m telescopes is now being deployed by Las Cumbres Observatory Global Telescope Network (LCOGT) in collaboration with SUPA/St Andrews (Scottish Universities Physics Alliance), with three telescopes in Chile, three in South Africa, three in Australia, and one each in Hawaii and Texas. This network is used to study microlensing events in conjuction with the Liverpool Telescope in the Canary Islands which is owned and operated by Liverpool John Moores University.

It is expected that the data from this suite of telescopes will be supplemented by measurements using the existing 1.8m MOA telescope at Mt John, the 1.3m Polish telescope in Chile known as OGLE, and the recently opened 1.3m Harlingten telescope in Tasmania.

The scientist’s proposal has been published online ahead of print in the Monthly Notices of the Royal Astronomical Society (Oxford University Press): http://dx.doi.org/10.1093/mnras/stt318

Source: The University of Auckland