News by Subject » Astrophysics » Fireworks in the Early Universe

Galaxies in the early Universe were rapidly making new stars. The ignition of these bright-shining stars gave fireworks in the form of intense energy bursts in the cores of the galaxies, and strong radio emissions. This has been discovered by an international team of astronomers under the leadership of the Dutch Prof. Peter Barthel. by studying 70 quasars and radio galaxies – called active galaxies – in the early Universe with the Herschel-telescope. The research results are published today in Astrophysical Journal Letters. 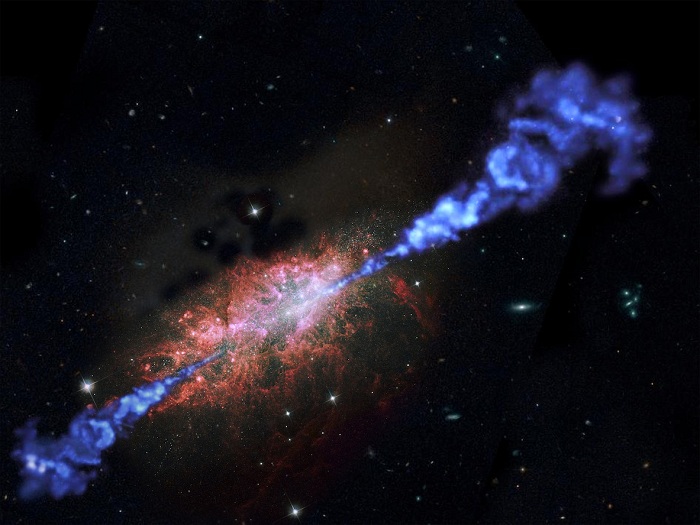 An artist’s impression of a radio galaxy which is rapidly forming stars. The radio emission is in blue; in the galaxy are lots of bright new stars. Image Credit: ESA / NASA / RUG / Marcel Zinger

Distant, active systems betray their presence by bright radio, ultraviolet, or X-ray radiation from the ‘hungry’, steadily consuming black hole at their core. The light of their ordinary stars is extremely weak at this distance.

The launch of Herschel in 2009 made it also possible to observe these quasars and radio galaxies in infrared wavelengths. The initial raw data within Barthels research show that these galaxies are unexpectedly strong infrared emitters, which means that large-scale star formation is taking place. Over a period of millions of years, hundreds of stars per year are being born. By comparison, our quiet Milky Way galaxy creates on average just one star per year.

The fact that the radio emission is strong, means that the activity in the nucleus of the galaxy is high. So, the central black hole is also growing fast, but the galaxy as a whole is growing as well thanks to the star formation.

According to Barthel the Herschel observations offer thus an explanation for the fact that heavy galaxies have massive black holes in their centers, and light galaxies have light ones. Until now, the distant, active galaxies were considered to be exotic exceptions. About the structure of these galaxies and their relations to ordinary galaxies was little known.

Barthel said: “It is now becoming clear that active galaxies are not only among the largest, most powerful and most spectacular objects in the Universe, but also the most important.”

” Moreover, further research should prove why a publication in Nature earlier this year is by no means consistent with our findings,” said Barthel.