According to Einstein, whenever massive objects interact, they produce gravitational waves — distortions in the very fabric of space and time — that ripple outward across the Universe at the speed of light. While astronomers have found indirect evidence of these disturbances, the waves have so far eluded direct detection. Ground-based observatories designed to find them are on the verge of achieving greater sensitivities, and many scientists think that this discovery is just a few years away. 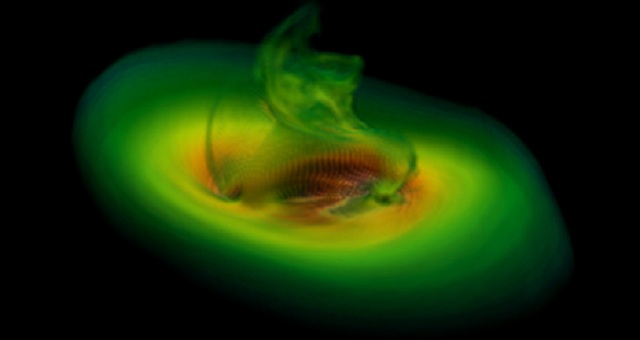 Frame from a simulation of a black hole merger employing both magnetic fields and the effects of the ionized gas in the accretion disk (redder colors correspond to greater density). This frame shows the scene two orbits into the simulation. The initial magnetic field of the gas is amplified by 100 times. Image Credit: NASA’s Goddard Space Flight Center/P. Cowperthwaite, Univ. of Maryland

Catching gravitational waves from some of the strongest sources — colliding black holes with millions of times the Sun’s mass — will take a little longer. These waves undulate so slowly that they won’t be detectable by ground-based facilities. Instead, scientists will need much larger space-based instruments, such as the proposed Laser Interferometer Space Antenna, which was endorsed as a high-priority future project by the astronomical community.

A team that includes astrophysicists at NASA’s Goddard Space Flight Center in Greenbelt, Md., is looking forward to that day by using computational models to explore the mergers of supersized black holes. Their most recent work investigates what kind of “flash” might be seen by telescopes when astronomers ultimately find gravitational signals from such an event. 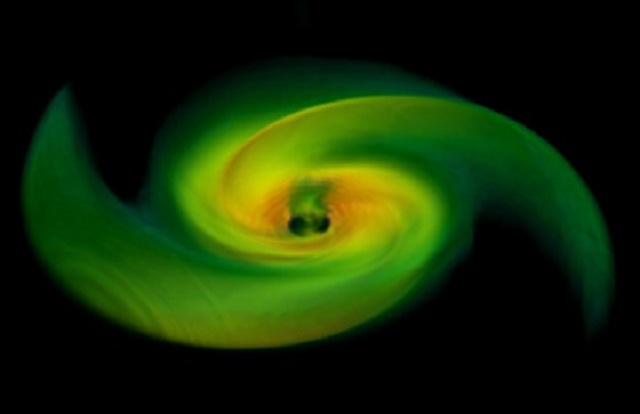 The black holes have merged in this frame from the simulation. Magnetic fields evacuate the region above the black hole and produce a thinner, hotter, denser disk in the immediate vicinity of the black hole than in simulations without them. Image Credit: NASA’s Goddard Space Flight Center/P. Cowperthwaite, Univ. of Maryland

“The black holes orbit each other and lose orbital energy by emitting strong gravitational waves, and this causes their orbits to shrink. The black holes spiral toward each other and eventually merge,” said Goddard astrophysicist John Baker. Studying gravitational waves will give astrophysicists an unprecedented opportunity to witness the Universe’s most extreme phenomena, leading to new insights into the fundamental laws of physics, the death of stars, the birth of black holes and, perhaps, the earliest moments of the Universe.

A black hole is an object so massive that nothing, not even light, can escape its gravitational grip. Most big galaxies, including our own Milky Way, contain a central supermassive black hole weighing millions of times the Sun’s mass, and when two galaxies collide, their monster black holes settle into a close binary system.

Close to these titanic, rapidly moving masses, space and time become repeatedly flexed and warped. Just as a disturbance forms ripples on the surface of a pond, drives seismic waves through Earth, or puts the jiggle in a bowl of Jell-O, the cyclic flexing of space-time near binary black holes produces waves of distortion that race across the Universe.

While gravitational waves promise to tell astronomers many things about the bodies that created them, they cannot provide one crucial piece of information — the precise position of the source. So to really understand a merger event, researchers need an accompanying electromagnetic signal — a flash of light, ranging from radio waves to X-rays — that will allow telescopes to pinpoint the merger’s host galaxy. 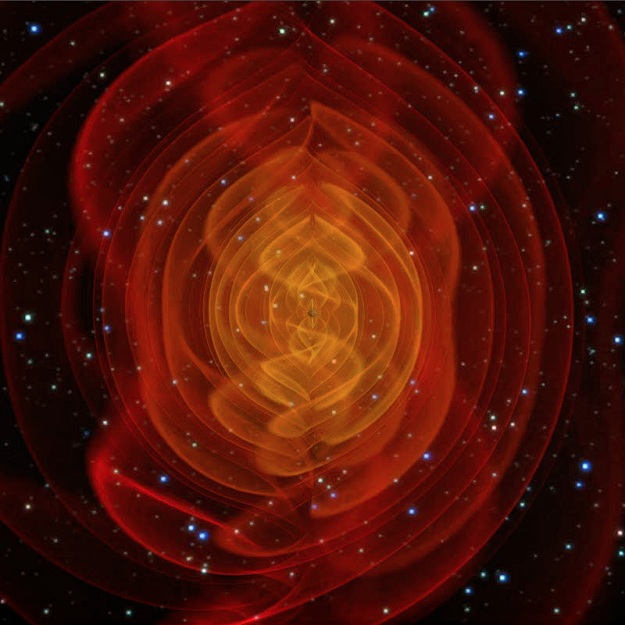 Understanding the electromagnetic counterparts that may accompany a merger involves the daunting task of tracking the complex interactions between the black holes, which can be moving at more than half the speed of light in the last few orbits, and the disks of hot, magnetized gas that surround them. Since 2010, numerous studies using simplifying assumptions have found that mergers could produce a burst of light, but no one knew how commonly this occurred or whether the emission would be strong enough to be detectable from Earth.

To explore the problem in greater detail, a team led by Bruno Giacomazzo at the University of Colorado, Boulder, and including Baker developed computer simulations that for the first time show what happens in the magnetized gas (also called a plasma) in the last stages of a black hole merger. Their study was published in the June 10 edition of The Astrophysical Journal Letters.

The simulations follow the complex electrical and magnetic interactions in the ionized gas — known as magnetohydrodynamics — within the extreme gravitational environment determined by the equations of Einstein’s general relativity, a task requiring the use of advanced numerical codes and fast supercomputers. 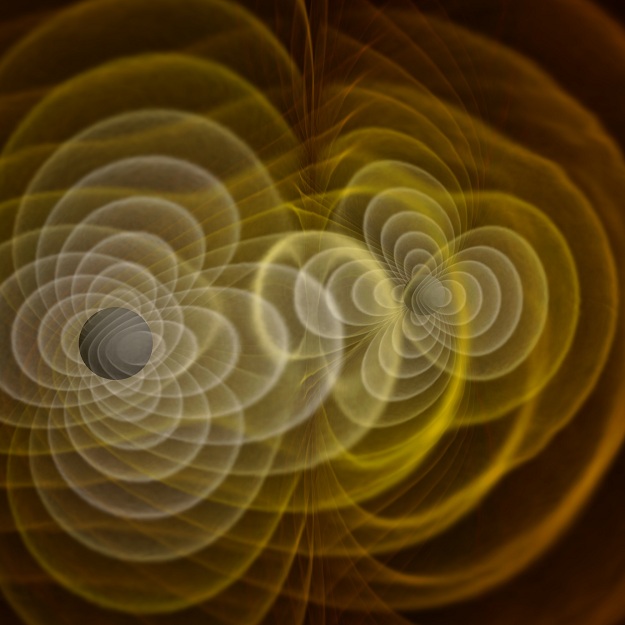 Frame from a simulation of the merger of two black holes and the resulting emission of gravitational radiation (colored fields, which represent a component of the curvature of space-time). The yellow areas near the black holes do not correspond to physical structures but generally indicate where the strong non-linear gravitational-field interactions are in play. Image Credit: NASA/C. Henze

Both of the simulations reported in the study were run on the Pleiades supercomputer at NASA’s Ames Research Center in Moffett Field, Calif. They follow the black holes over their last three orbits and subsequent merger using models both with and without a magnetic field in the gas disk.

Additional simulations were run on the Ranger and Discover supercomputers, respectively located at the University of Texas, Austin, and the NASA Center for Climate Simulation at Goddard, in order to investigate the effects of different initial conditions, fewer orbits and other variations.

“What’s striking in the magnetic simulation is that the disk’s initial magnetic field is rapidly intensified by about 100 times, and the merged black hole is surrounded by a hotter, denser, thinner accretion disk than in the unmagnetized case,” Giacomazzo explained. 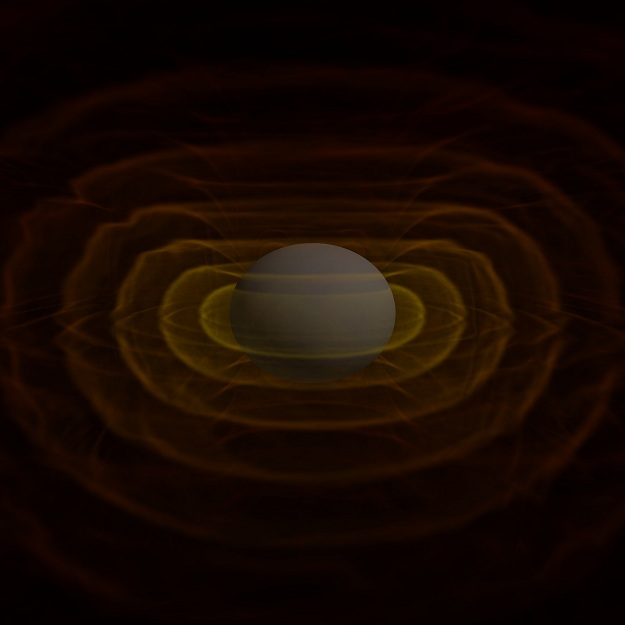 Frame from a simulation of the merger of two black holes and the resulting emission of gravitational radiation (colored fields, which represent a component of the curvature of space-time). The yellow areas near the black holes do not correspond to physical structures but generally indicate where the strong non-linear gravitational-field interactions are in play. Image Credit: NASA/C. Henze

In the turbulent environment near the merging black holes, the magnetic field intensifies as it becomes twisted and compressed. The team suggests that running the simulation for additional orbits would result in even greater amplification.

The most interesting outcome of the magnetic simulation is the development of a funnel-like structure — a cleared-out zone that extends up out of the accretion disk near the merged black hole. “This is exactly the type of structure needed to drive the particle jets we see from the centers of black-hole-powered active galaxies,” Giacomazzo said.

The most important aspect of the study is the brightness of the merger’s flash. The team finds that the magnetic model produces beamed emission that is some 10,000 times brighter than those seen in previous studies, which took the simplifying step of ignoring plasma effects in the merging disks.

“We need gravitational waves to confirm that a black hole merger has occurred, but if we can understand the electromagnetic signatures from mergers well enough, perhaps we can search for candidate events even before we have a space-based gravitational wave observatory,” Baker said.