Computer simulations of galaxies growing over billions of years have revealed a likely scenario for how they feed: a cosmic version of swirly straws. 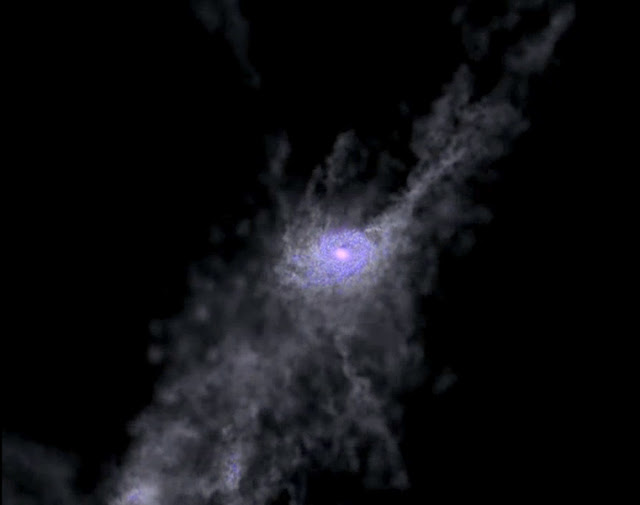 Created with the help of supercomputers, this still from a simulation shows the formation of a massive galaxy during the first 2 billion years of the Universe. Hydrogen gas is gray, young stars appear blue, and older stars are red. The simulation reveals that gas flows into galaxies along filaments akin to cosmic bendy, or swirly, straws. Image Credit: The N-Body Shop at the University of Washington

The results show that cold gas — fuel for stars — spirals into the cores of galaxies along filaments, rapidly making its way to their “guts.” Once there, the gas is converted into new stars, and the galaxies bulk up in mass.

“Galaxy formation is really chaotic,” said Kyle Stewart, lead author of the new study that appeared in the May 20th issue of the Astrophysical Journal. “It took us several hundred computer processors, over months of time, to simulate and learn more about how this process works.” Stewart, who is now at the California Baptist University in Riverside, Calif., completed the majority of this work while at NASA’s Jet Propulsion Laboratory in Pasadena, Calif.

In the early Universe, galaxies formed out of clumps of matter, connected by filaments in a giant cosmic web. Within the galaxies, nuggets of gas cooled and condensed, becoming dense enough to trigger the birth of stars. Our Milky Way spiral galaxy and its billions of stars took shape in this way.

The previous, standard model of galaxy formation held that hot gas sank into the centers of burgeoning galaxies from all directions. Gas clouds were thought to collide into each other, sending out shock waves, which then heated up the gas. The process is similar to jets creating sonic booms, only in the case of galaxies, the in-falling gas travels faster than the speed of sound, piling up into waves. Eventually, the gas cools and sinks to the galactic center. This process was theorized to be slow, taking up to 8 billion years.

Recent research has contradicted this scenario in smaller galaxies, showing that the gas is not heated. An alternate “cold-mode” theory of galaxy formation was proposed instead, suggesting the cold gas might funnel along filaments into galaxy centers. Stewart and his colleagues set out to test this theory and address the mysteries about how the cold gas gets into galaxies, as well as the rate at which it spirals in.

Since it would take billions of years to watch a galaxy grow, the team simulated the process using supercomputers at JPL; NASA’s Ames Research Center, Moffett Field, Calif.; and the University of California, Irvine. They ran four different simulations of the formation of a galaxy like our Milky Way, starting from just 57 million years after the Big Bang until present day.

Created with the help of supercomputers, this simulation shows the formation of a massive galaxy during the first 2 billion years of the universe. Hydrogen gas is gray, young stars appear blue, and older stars are red. The simulation reveals that gas flows into galaxies along filaments akin to cosmic bendy, or swirly, straws.  Jillian Bellovary of Vanderbilt University, Nashville, Tenn.; Fabio Governato of the University of Washington, Seattle, and the University of Washington’s N-Body Shop helped create the simulation.

The simulations began with the starting ingredients for galaxies — hydrogen, helium and dark matter — and then let the laws of physics take over to create their galactic masterpieces. Supercomputers are needed due to the enormous number of interactions.

“The simulations are like a gigantic game of chess,” said Alyson Brooks, a co-author of the paper and expert in galaxy simulations at the University of Wisconsin, Madison. “For each point in time, we have to figure out how a given particle — our chess piece — should move based on the positions of all of the other particles. There are tens of millions of particles in the simulation, so figuring out how the gravitational forces affect each particle is time-consuming.”

When the galaxy concoctions were ready, the researchers inspected the data, finding new clues about how cold gas sinks into the galaxy centers. The new results confirm that cold gas flows along filaments and show, for the first time, that the gas is spinning around faster than previously believed. The simulations also revealed that the gas is making its way down to the centers of galaxies more quickly than what occurs in the “hot-mode” of galaxy formation, in about 1 billion years.

“We have found that the filamentary structures that galaxies are built on are key to how they build up over time, by threading gas into them efficiently,” said Leonidas Moustakas, a co-author at JPL.

The researchers looked at dark matter too — an invisible substance making up about 85 percent of matter in the Universe. Galaxies form out of lumps of regular matter, so-called baryonic matter that is composed of atoms, and dark matter. The simulations showed that dark matter is also spinning at a faster rate along the filaments, spiraling into the galaxy centers.

The results help answer a riddle in astronomy about galaxies with large extended disks of material spinning around them, far from their centers. Researchers didn’t understand how the outer material could be spinning so fast. The cold-mode allows for this rapid spinning, fitting another jigsaw piece into the puzzle of how galaxies grow.

“The goal of simulating galaxies is to compare them to what telescopes observe and see if we really understand how to build a galaxy,” said Stewart. “It helps us makes sense of the real Universe.”