The problem of the missing hydrogen in the early Universe

Hydrogen is the most common element in the Universe, making up 75% of all normal matter and the content of stars. Although stars themselves are hot, they can only form out of the coldest gas when a massive cloud of hydrogen can collapse under its own gravity until nuclear fusion starts – the fusing of atoms together which releases the huge amounts of energy we see as starlight. 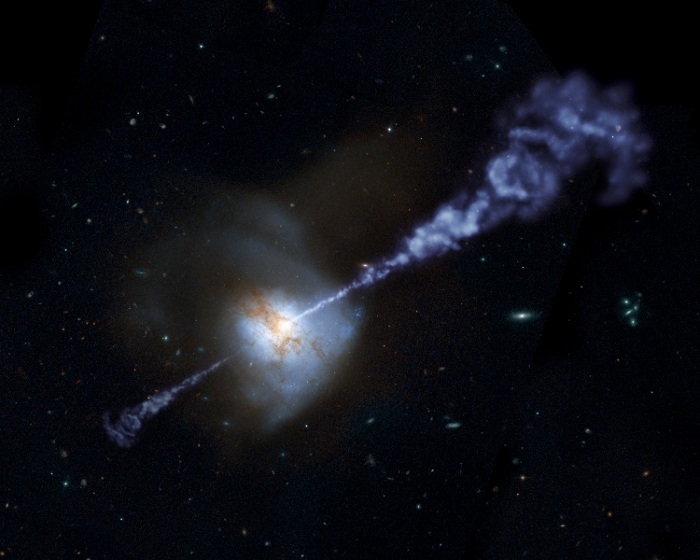 Astronomers have been puzzled as to why they could not detect this cold star-forming gas in the most distant, and hence older, regions of the Universe. At such vast look-back times, astronomers expected the gas to be much more abundant as it has yet to be consumed by star formation.

Dr Stephen Curran, from the University of Sydney’s School of Physics and CAASTRO and Dr Matthew Whiting, from CSIRO Astronomy and Space Science, have addressed this problem by devising a model that shows how the supermassive black hole, lurking within the centre of each active galaxy, is able to ionise all of the surrounding gas even in the very largest galaxies.

When hydrogen gas is in this state, where the electron is ripped out of the atom, the gas it too agitated to allow the cloud to collapse and form stars. Also, when ionised, it cannot be detected through radio waves at 21-centimetres – the way cold star-forming gas is normally found.

“Previously, we had not known just how much of the gas was ionised by the black hole accretions disks – we had thought that perhaps it was just enough to take the abundance of cool gas to below the detection threshold of current radio telescopes. So we’d thought that it was maybe a telescope sensitivity issue,” said Dr Curran.

Dr Curran and Dr Whiting’s latest research, published in print in The Astrophysical Journal on 10 November 2012, shows that the extreme ultra-violet radiation given off by the material being sucked in – at near light-speeds – to the black hole, is sufficient to ionise all of the gas in even the very largest galaxies.

“In order to probe further back in time, we choose the most distant radio sources. What appears as faint light from these, to us on Earth, is actually extreme ultra-violet, dimmed and stretched (redshifted) to visible light on its several billion year journey to us,” explained Dr Curran.

“Unfortunately, these are the only objects we know of at the very limits of the cosmos and within these the radiation from the central black hole is so intense as to heat all the gas to the point where it cannot form stars.

“We have shown that rather than being a telescope sensitivity issue, all of the billions of suns worth of gas is indeed ionised. This means that even the Square Kilometre Array – the biggest radio telescope, which is currently being built in Australia, New Zealand and southern Africa – will not be able to detect star-forming gas in these galaxies,” said Dr Curran.

“The Square Kilometre Array will excel, however, in detecting very cold gas that is too faint to be detected by optical telescopes, which must have existed to give us the stars and galaxies we see today.”

The paper by S. J. Curran & M. T. Whiting “Complete ionisation of the neutral gas: why there are so few detections of 21-cm hydrogen in high redshift radio galaxies and quasars” is published in The Astrophysical Journal 759-117