Astronomers have puzzled over why some puny, extremely faint dwarf galaxies spotted in our Milky Way galaxy’s back yard contain so few stars.

Simulation of dark matter in the Milky Way halo

These ghost-like galaxies are thought to be some of the tiniest, oldest, and most pristine galaxies in the universe. They have been discovered over the past decade by astronomers using automated computer techniques to search through the images of the Sloan Digital Sky Survey. But astronomers needed NASA’s Hubble Space Telescope to help solve the mystery of these star-starved galaxies.

Hubble views of three of the small-fry galaxies reveal that their stars share the same birth date. The galaxies all started forming stars more than 13 billion years ago — and then abruptly stopped — all in the first billion years after the universe was born in the Big Bang.

The relic galaxies are evidence for a transitional phase in the early Universe that shut down star-making factories in tiny galaxies. During this time, the first stars burned off a fog of cold hydrogen in a process called reionization.

The image at left shows part of the galaxy, outlined by the white rectangular box. The box measures 83 light-years wide by 163 light-years long. The few stars in Leo IV are lost amid neighboring stars and distant galaxies.

A close-up view of the background galaxies within the box is shown in the middle image. The image at right shows only the stars in Leo IV. The galaxy, which contains several thousand stars, is composed of Sun-like stars, fainter, red dwarf stars, and some red giant stars brighter than the Sun. Astronomers discovered Leo IV in Sloan Digital Sky Survey images by spotting a region where a clump of stars was huddled closer together than stars in areas around it.

Residing 500,000 light-years from Earth, Leo IV is one of more than a dozen ultra-faint dwarf galaxies found lurking around our Milky Way galaxy. These galaxies are dominated by dark matter, an invisible substance that makes up the bulk of the universe’s mass.

“These galaxies are all ancient and they’re all the same age, so you know something came down like a guillotine and turned off the star formation at the same time in these galaxies,” said Tom Brown of the Space Telescope Science Institute in Baltimore, Md., the study’s leader. “The most likely explanation is reionization.”

The reionization of the Universe began in the first billion years after the Big Bang. During this epoch, radiation from the first stars knocked electrons off primeval hydrogen atoms, ionizing the cool hydrogen gas. This process allowed the hydrogen gas to become transparent to ultraviolet light.

Ironically, the same radiation that sparked universal reionization appears to have squelched star-making activities in dwarf galaxies, such as those in Brown’s study. The small irregular galaxies were born about 100 million years before reionization began and had just started to churn out stars. Roughly 2,000 light-years wide, the galaxies are the smaller cousins of the more luminous star-making dwarf galaxies near our Milky Way. Unlike their larger relatives, the puny galaxies were not massive enough to shield themselves from the harsh ultraviolet light. What little gas they had was stripped away as the flood of ultraviolet light rushed through them. Their gas supply depleted, the galaxies could not make new stars. 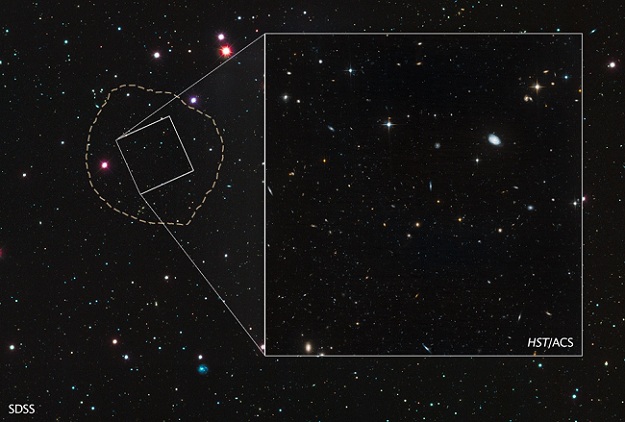 The wide image, taken by the Sloan Digital Sky Survey, is a view of Leo IV and the surrounding neighborhood. The galaxy resides 500,000 light-years from Earth. The dotted line marks the galaxy’s boundaries, measuring about 1,100 light-years wide. The small white box outlines the Hubble Space Telescope’s view.

Leo IV has so few stars, roughly several thousand, that astronomers had difficulty identifying it as a galaxy. Astronomers discovered Leo IV in Sloan Digital Sky Survey images by spotting a region where a clump of stars was huddled closer together than stars in areas around it. The dwarf galaxy is composed of Sun-like stars, fainter red dwarf stars, and some red giant stars brighter than the Sun.

Hubble’s close-up view is shown in the inset at right, measuring 483 light-years wide. Astronomers used Hubble to measure the ages of the stars in Leo IV and two other ultra-faint dwarf galaxies. The measurements revealed that the stars in all three galaxies are more than 13 billion years old, almost as old as the 13.7-billion-year-old universe. Because the stars in these galaxies are so ancient and share the same age, astronomers suggest that a global event, such as reionization, shut down star formation in them. Reionization is a transitional phase in the early universe when the first stars burned off a fog of cold hydrogen.

The discovery could help explain the so-called “missing satellite problem,” where only a few dozen dwarf galaxies have been observed around the Milky Way while computer simulations predict that thousands should exist. One possible explanation is that there has been very little, or even no star formation in the smallest of these dwarf galaxies, making them difficult to detect.

The Sloan survey recently uncovered more than a dozen of these star-starved galaxies in our Milky Way’s neighborhood while scanning just a quarter of the sky. Astronomers think the rest of the sky should contain dozens more of these objects, dubbed ultra-faint dwarf galaxies. The evidence for squelched star formation in some of the smallest of these dwarfs suggests that there may be thousands more where essentially no stars formed at all.

“By measuring the star formation histories of the observed dwarfs, Hubble has confirmed earlier theoretical predictions that star formation in the smallest clumps would be shut down by reionization,” said Jason Tumlinson of the Space Telescope Science Institute, a member of the research team. These illustrations, taken from computer simulations, show a swarm of dark matter clumps around our Milky Way galaxy. Some of the dark-matter concentrations are massive enough to spark star formation. Dark matter is an invisible substance that accounts for most of the universe’s mass.

In the first panel, thousands of clumps of dark matter coexist with our Milky Way galaxy, shown in the center.

The green blobs in the second panel are those dark-matter chunks massive enough to obtain gas from the intergalactic medium and trigger ongoing star formation, eventually creating dwarf galaxies.

In the third panel, the red blobs are ultra-faint dwarf galaxies that stopped forming stars long ago. New Hubble Space Telescope observations of three of the puny galaxies reveal that star-making in these faint galaxies shut down more than 13 billion years ago.

Brown’s results appeared in the July 1 issue of The Astrophysical Journal Letters.

“These are the fossils of the earliest galaxies in the Universe,” Brown said. “They haven’t changed in billions of years. These galaxies are unlike most nearby galaxies, which have long star-formation histories.”

The stellar populations in these fossil galaxies range from a few hundred to a few thousand stars both fainter and brighter than our Sun. The galaxies may be star-deprived, but they have an abundance of dark matter, the underlying scaffolding upon which galaxies are built.

These mostly dark-matter islands coexisted unseen with our Milky Way for billions of years, until astronomers began finding them in the Sloan survey.

When these galaxies were uncovered, astronomers began proposing many reasons for their shortage of stars. Some believed that internal dynamics, such as a supernova blast, blew out the gas needed to create more stars. Others suggested that the galaxies simply used up what little gas they had. And a few thought that the galaxies were born during the early Universe and reionization had turned off their star formation.

Then, ground-based observations of two of the newly discovered galaxies revealed tantalizing evidence that the stars were indeed ancient. So Brown decided to use Hubble’s Advanced Camera for Surveys to look deep inside six of the galaxies to study the population of stars and determine when they were born. So far, Brown and his team have finished analyzing the Hubble data of three of the galaxies, named Hercules, Leo IV, and Ursa Major. The galaxies’ distance from Earth ranges from 330,000 light-years to 490,000 light-years.

“Astronomers have said before that certain galaxies should be ancient, and then someone studies them hard enough and finds younger stars,” Brown said. “Some of us expected to uncover younger stars and prove that the galaxies are not relics from the early Universe. We were surprised to find that all the stars were ancient.”

Brown measured the stars’ ages by analyzing their brightness and colors. For reference, Brown compared the galaxies’ stars with the stars in the ancient globular cluster M92, located 26,000 light-years away. M92 is more than 13 billion years old, one of the oldest objects in the universe. The analysis revealed that the galaxies’ stars are as old as those in M92.

“The stars in the ultra-faint dwarf galaxies are very sparse,” Brown said. “This is one reason why no one went after them with Hubble. However, we thought they were good targets for Hubble, given Hubble’s ability to measure precise ages. You look at the Hubble images and there are almost no stars, but the ones we have are enough to give us the ages of these galaxies.”