Among the oddities of the outer Solar System are the middle-sized moons of Saturn, a half-dozen icy bodies dwarfed by Saturn’s massive moon Titan. According to a new model for the origin of the Saturn system, these middle-sized moons were spawned during giant impacts in which several major satellites merged to form Titan. 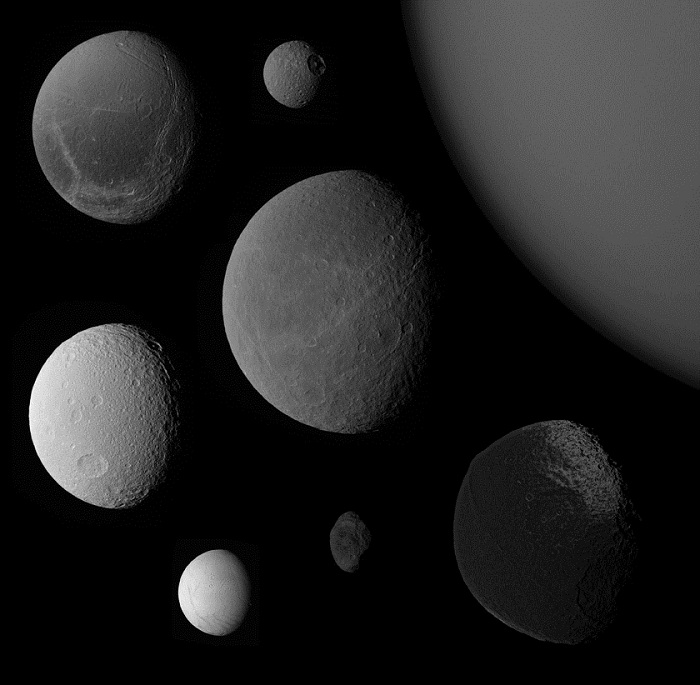 Erik Asphaug, professor of Earth and planetary sciences at the University of California, Santa Cruz, will present this new hypothesis October 19 at the annual meeting of the Division for Planetary Sciences of the American Astronomical Society in Reno, Nevada. Asphaug and his coauthor, Andreas Reufer of the University of Bern, Switzerland, also describe their model in detail in a paper to be published in Icarus (in press).

Asphaug and Reufer propose that the Saturn system started with a family of major satellites comparable to the four large moons of Jupiter (known as the Galilean moons, discovered by Galileo in 1610). The Galilean moons account for 99.998 percent of the mass in Jupiter’s satellite system; although it has dozens of small satellites, Jupiter has no middle-sized moons. The new model may explain why the two systems are so different.

“We think that the giant planets got their satellites kind of like the Sun got its planets, growing like miniature solar systems and ending with a stage of final collisions,” Asphaug said. “In our model for the Saturn system, we propose that Titan grew in a couple of giant impacts, each one combining the masses of the colliding bodies, while shedding a small family of middle-sized moons.” This image from a computer simulation shows the final merged body and a collection of small satellites after a giant impact like that thought to have formed Saturn’s moon Titan. Colors represent temperature changes caused by the impact. See video of the simulation below. Image Credit: E. Asphaug and A. Reufer

“Our model explains the diversity of these ice-rich moons and the evidence for their very active geology and dynamics,” he said. “It also explains a puzzling fact about Titan, in that a giant impact would give it a high orbital eccentricity.”

Asphaug and Reufer used computer simulations to study the giant impact scenario, and they found that mergers of satellites the size of the Galilean moons can liberate ice-rich spiral arms, mostly from the outer layers of the smaller of the colliding moons. Gravitational clumping of the spiral arms then leads to the formation of clumps with sizes and compositions that resemble Saturn’s middle-sized moons.

“These satellite collisions are a regime that is not very well understood, so the modeling opens up new possibilities in general for planet formation,” Reufer said.

Collisional merger of two large satellites, in the Asphaug and Reufer model for the origin of the Saturn system:
Two Galilean satellites, adding up to about the mass of Titan, colliding at low initial relative velocity and an impact angle of 75°. They are coded by color, with 50 wt% ice, over 35 wt% rock, over 15 wt% iron. The outcome is a merger, spinning off spiral arms that clump into icy bodies ~100 to ~1000 km diameter. Some of these clumps escape, becoming moons of their own; others remain bound to the final merged body, becoming subsatellites at least for some time. Video Credit: Erik Asphaug

The proposed mergers might have occurred as the final act in the process of satellite formation. Alternatively, Saturn may have had a stable system of Galilean-like satellites that was later disrupted by the possibly chaotic migration of the giant planets, as described in the popular “Nice model” of the Solar System. A late origin has the advantage of explaining some of the most striking features of the Saturn system.

“What makes the Saturn system so beautiful and unique could be its youth,” Asphaug said. “While we don’t have a preferred timeframe for this origin scenario to play out, it could have happened recently if something came along to destabilize the Saturn system, triggering the collisional mergers that formed Titan. This ‘something’ could have been the close passage of a marauding Uranus and Neptune, which is part of the Nice model.”

Asphaug acknowledged a couple of dynamical issues raised by the new model. The clumps spawned from the giant impacts might get swept up into the accretion of Titan, rather than evolving into separate moons with their own stable orbits. Additional simulations of the dynamical evolution of the complicated, accreting system are needed to further explore and validate the model. But Asphaug said new data from NASA’s Cassini mission on the geophysics of Saturn’s moons will provide the ultimate tests.

“Our model makes strong predictions for how Titan was assembled, what the middle-sized moons are made of, and how they started out as rapidly spinning clumps of ice-rich material,” he said. “So it’s testable. These little moons could provide the clues telling us what happened, and when.”