Sparse halos of neutrinos within the hearts of exploding stars exert a previously unrecognized influence on the physics of the explosion and may alter which elements can be forged by these violent events. 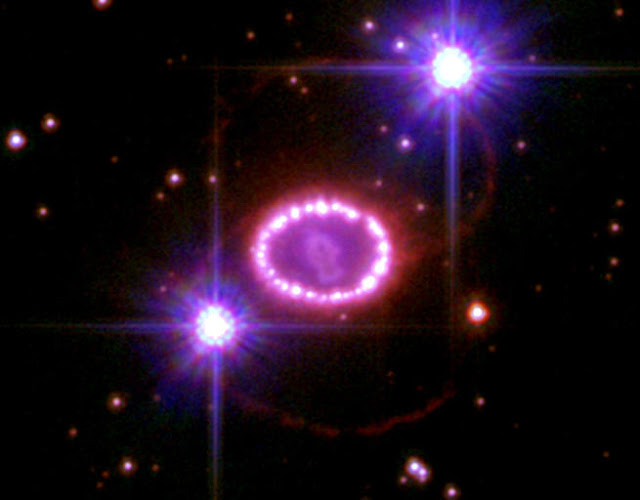 The titanic supernova, called SN 1987A, blazed with the power of 100 million suns for several months following its discovery on Feb. 23, 1987. This image shows the entire region around the supernova. The most prominent feature in the image is a ring with dozens of bright spots. A shock wave of material unleashed by the stellar blast is slamming into regions along the ring’s inner regions, heating them up, and causing them to glow. The ring, about a light-year across, was probably shed by the star about 20,000 years before it exploded. Image  Credit: NASA, ESA, P. Challis, and R. Kirshner (Harvard-Smithsonian Center for Astrophysics)

John Cherry, a graduate student at UC San Diego, models stellar explosions, including a type called a core-collapse supernova. As these stars run out of fuel, their cores suddenly collapse to form a neutron star, which quickly rebounds sending seas of neutrinos through the surrounding stellar envelope and out into space.

Even as the collapsed core is rebounding, the rest of the star is still falling inward. Plumes of matter sink, accreting onto the core. “This matter is actually causing some small fraction of neutrinos to bounce at wide angles and cross the trajectories of neutrinos coming from the core,” Cherry said.

Astrophysicists knew that the heart of that envelope contained these scattered neutrinos, but because they are relatively few compared with the numbers streaming from the core, they thought their influence on the physics of these explosions would be so minor it could be ignored. Not so, Cherry and colleagues demonstrated in a paper they published in Physics Review Letters. They showed that neutrinos streaming from the core interacted with halo neutrinos far more often than anticipated.

Cherry calculated how often that might occur and how large a difference it would make to their models of neutrinos within supernovae. “What was so startling about this is that nowhere was the correction less than 14 percent. That’s enough that you need to worry about it,” he said. Indeed, the some places in the outer regions of the envelope require as much as a 10 fold correction.

Neutrinos are famously aloof particles that seldom interact with other matter. “The way neutrinos interact in matter depends on what we call ‘flavor’,” said George Fuller, professor of physics at UC San Diego who leads the neutrino-modeling research group and is a co-author of the paper.

When neutrinos meet, they “scatter” off one another and in the process can change their flavor. The influence is much greater than physicists thought in the outer halo of neutrinos. “Even though few neutrinos are scattered in funny directions, they can completely dominate how the neutrinos change their favors,” Fuller said.

And the balance of neutrino flavors determines many important things.”The neutrinos are the engine that drives the exploding star,” Cherry said. “What’s going on with neutrinos sets the entire stage for what’s happening in the explosion.”

“Those neutrino flavor states allow the neutrinos to change protons to neutrons or neutrons to protons.” Cherry said. “What matter is produced, what kinds of atoms, elements are produced by these supernovae are changed dramatically if you change the flavor content of neutrinos.”

Source: The University of California – San Diego via EurekAlert! and ScienceDaily