These days the core of the Milky Way galaxy is a pretty tame place…cosmically speaking. The galactic supermassive black hole at the center is a sleeping giant. Existing stars are peacefully circling. Although conditions are favorable, there doesn’t even seem to be much new star formation going on. 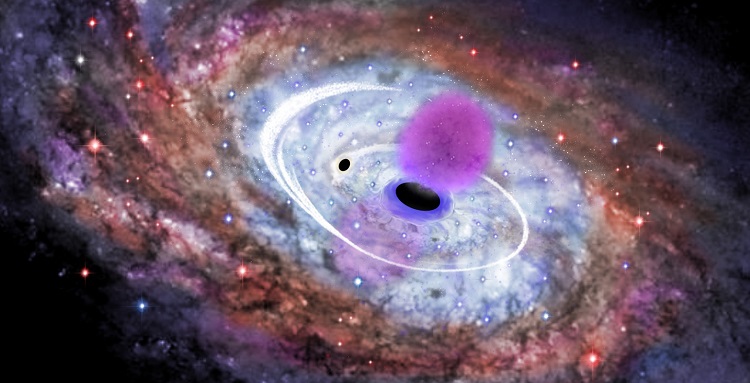 But there is growing evidence that several million years ago the galactic center was the site of all manner of celestial fireworks. A pair of assistant professors – Kelly Holley-Bockelmann at Vanderbilt and Tamara Bogdanović at Georgia Institute of Technology – have come up with an explanation that fits these “forensic” clues.

Writing in the March 6 issue of the Monthly Notices of the Royal Astronomical Society, the astronomers describe how a single event – a violent collision and merger between the galactic black hole and an intermediate-sized black hole in one of the small “satellite galaxies” that circle the Milky Way – could have produced the features that point to a more violent past for the galactic core.

“Tamara and I had just attended an astronomy conference in Aspen, Colorado, where several of these new observations were announced,” said Holley-Bockelmann. “It was January 2010 and a snow storm had closed the airport. We decided to rent a car to drive to Denver. As we drove through the storm, we pieced together the clues from the conference and realized that a single catastrophic event – the collision between two black holes about 10 million years ago – could explain all the new evidence.” 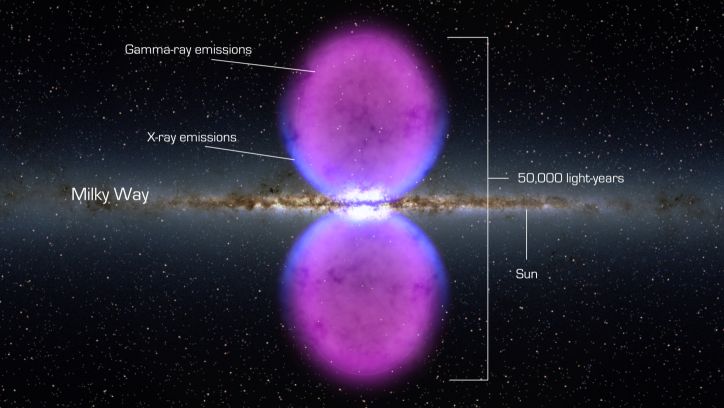 The most dramatic of these extraordinary clues are the Fermi bubbles. These giant lobes of high-energy radiation – caused by particles moving nearly the speed of light – extend some 30,000 light-years above and below the Milky Way center. If they were glowing in visible light they would fill about half of the night sky. But they radiate X-ray and gamma-ray light, so you need X-ray vision to see them. The discovery was reported by astronomers at the Harvard-Smithsonian Center for Astrophysics.

Another puzzling characteristic of the galactic center, is the fact that it contains the three most massive clusters of young stars in the entire galaxy. The Central, Arches and Quintuplet clusters each contain hundreds of young, hot stars that are much larger than the Sun. These stars typically burn out in “only” a few million years because of their extreme brightness, so there had to have been a relatively recent burst of star formation at the galactic center.

The supermassive black hole that dominates the center of the Milky Way weighs in at about four million solar masses and is roughly 40 light-seconds in diameter: only nine times the size of the Sun. Such an object produces intense gravitational tides. So astronomers were surprised to discover a number of clumps of bright new stars closer than three lights-years from the black hole’s maw. It wouldn’t be that surprising if the stars were being sucked into the black hole, but they show every sign of having formed in place. For this to happen, the clouds of dust and gas that they formed from must have been exceptionally dense: 10,000 times thicker than the other molecular clouds in the galactic center.

While there is an excess of young hot stars in the galactic core, there is also a surprising dearth of older stars. Theoretical models predict that the density of old stars should increase as you move closer to the black hole. Instead, there are very few old stars found within several light-years of the sleeping giant.

When she got home from the conference, Holley-Bockelmann recruited Vanderbilt graduate student Meagan Lang to work on the problem with them. With the assistance of Pau Amaro-Seoane from the Max Planck Institute for Gravitational Physics in Germany, Alberto Sesana from the Institut de Ciències de l’Espai in Spain, and Vanderbilt Research Assistant Professor Manodeep Sinha, they came up with a theoretical model that fits the observations and makes some testable predictions.

The scenario began about 13 billion years ago, when the path of one of the smaller satellite galaxies orbiting the Milky Way is diverted so that it began drifting inward toward the core. According to a recent study, this may have happened dozens of times in the lifetime of the Milky Way. As the satellite galaxy – a collection of stars and gas with an intermediate-sized black hole with a mass equal to about 10,000 suns – spiraled in, most of its mass was gradually stripped away, finally leaving the black hole and a handful of gravitationally bound stars. 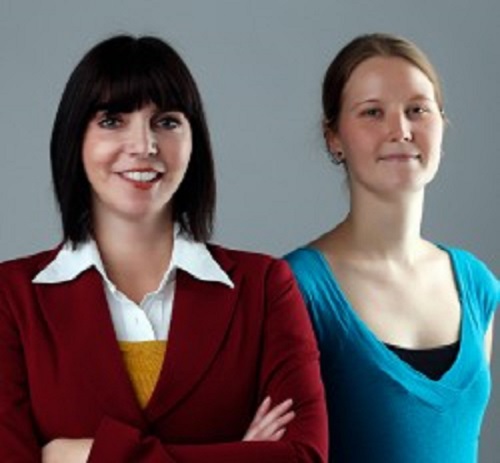 As the smaller black hole circled closer and closer, it would have churned up the dust and gas in the vicinity and pushed enough material into the galactic black hole in the process to produce the Fermi bubbles.

The violent gravitational tides produced by the process could easily have compressed the molecular clouds in the core to the super densities required to produce the young stars that are now located on the central black hole’s doorstep.

In addition, the vigorous churning would have swept out the existing stars from the area surrounding the massive central black hole. In fact, the astronomer’s model predicts that the black holes’ merger dance should have flung a large number of the missing old stars out into the galaxy at hyper velocities, thus explaining the absence of old stars immediately around the supermassive black hole.

“The gravitational pull of the satellite galaxy’s black hole could have carved nearly 1,000 stars out of the galactic center,” said Bogdanović. “Those stars should still be racing through space, about 10,000 light-years away from their original orbits.”

It should be possible to detect these stars with large surveys like the Sloan Digital Sky Survey because these stars would be traveling at much higher velocities than stars that have not undergone this type of interaction. So discovery of a large number of “high velocity stars” racing outward through the galaxy would strongly support the proposed scenario of the Milky Way and satellite galaxy merger.