A research team, led by a researcher at the National Astronomical Observatory of Japan (NAOJ), discovered that the heaviest black holes tend to be located in galactic environments with higher density. This finding indicates that galaxies in a dense area often merge together, causing the growth of supermassive black holes.

An artist’s illustration of galaxy distribution, a host galaxy of an active galactic nucleus (AGN), and an active galactic nucleus. An AGN is a luminous compact region at the center of the galaxy, powered by the accretion of gas onto the massive black hole. This research reveals that the mass of a massive black hole at the galaxy center is related to the distribution of surrounding galaxies. Image Credit: NAOJ

Supermassive black holes of more than one million solar masses exist at the center of most galaxies. Some of these massive black holes are observed as active galactic nuclei (AGNs) which attract surrounding gas and release huge amounts of energy.

How does a massive black hole get “fat”? One possibility is that mutual interaction between galaxies leads to the growth of a black hole. If this theory is correct, there must be some relationship between the properties of a supermassive black hole and the environment of its host galaxy. Previous studies revealed that radio-loud AGNs are in the overcrowded region. However, the relation between the mass of a central black hole and the environment around an active galaxy (galaxies hosting AGNs) is still not clear. This is why the research team explored the distribution of galaxies surrounding active galaxies.

The research team utilized the “Virtual Observatory” to examine many supermassive black holes and the environment of active galaxies.

The Virtual Observatory is a system to make integrated use of various astronomical databases around the world via sharing over the Internet. The Astronomy Data Center of NAOJ has been developing an original portal site for the Virtual Observatory. To begin with this research, the team collected the data on more than 10,000 AGN whose black hole mass had been already measured by spectroscopic observation with the Sloan Digital Sky Survey (SDSS) [Note 1]. 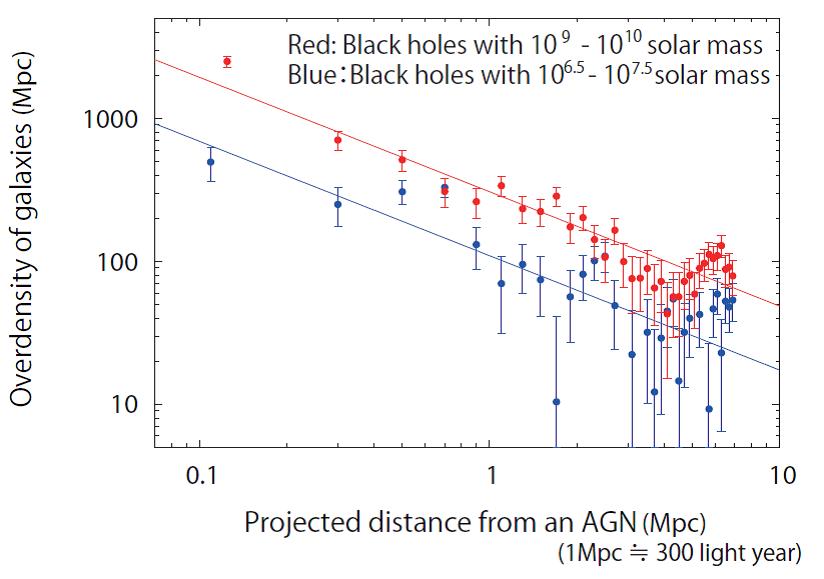 Distribution of galaxies surrounding AGN, arranged according to mass of black holes; only the heaviest and lightest groups are described here. This figure makes clear that the density tends to be higher in galaxies closer to AGN, and also higher around active galaxies with heavier black holes. Image Credit: NAOJ

Next, data on galaxies surrounding active galaxies were gathered from galaxy catalogues of the UKIRT Infrared Deep Sky Survey (UKIDSS) [Note 2]; the number of galaxies reached approximately 70 million. Using the Virtual Observatory, the team could automatically and efficiently extract only necessary galactic data from the large amount of data sets on those galaxies surrounding active galaxies. In addition, they developed a new analysis method in order to obtain the density distribution of galaxies with a high degree of accuracy.

Galaxy mergers frequently occur in regions where density of galaxies is high. The collision and merger of galaxies change gas dynamics within them, and can trigger the gas infall to their central region, leading to the growth of the black hole. Furthermore, when both merging galaxies have their own supermassive black holes, both black holes may merge together to become an even more massive black hole. 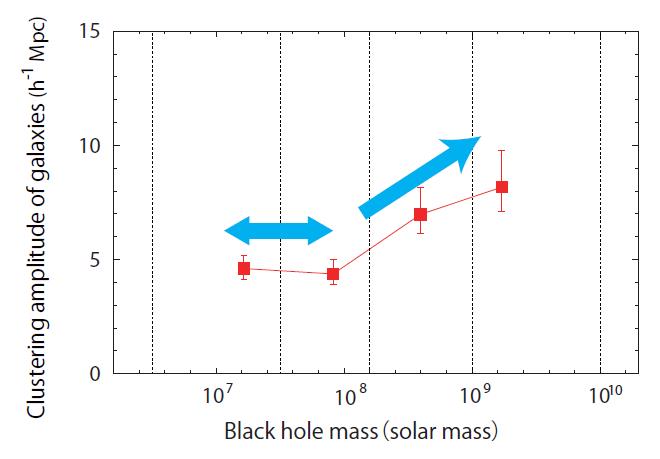 The difference of galactic density according to black-hole mass (the vertical axis shows the size of regions with enhanced galactic density: the bigger the size, the higher the density). The heavier black holes are located in galaxies with higher density for black holes with mass larger than ~10^8 solar mass. While the less massive black holes show no correlation between the mass of black holes and the density of galaxies. Image Credit: NAOJ

On the other hand, a very unexpected characteristic, even for the research team, was also found; in regards to supermassive black holes with a solar mass of 100 million or less, there is no correlation between the black-hole mass and the galaxy distribution. This suggests that there is a possibility that the growth process may be different between black holes above and below 100 million solar masses.

“Through this research, we have rediscovered the real potential of the Virtual Observatory, which can process such a huge amount of data in a very short time,” said Komiya.

The research method via the Virtual Observatory can be applied to research using larger amounts of observation data, such as that captured by the new wide-field cameras of the Subaru Telescope. Yuji Shirasaki, one of the research team members, talked about future research prospects, saying, “A large part of the total picture, such as the formation mechanism of relatively small massive black holes, still remains unknown; one of the reasons is the lack of observation. There are a lot of things to explore, including the mystery of how massive black holes are born.”

The scientific paper on which this article is based “A Cross-correlation Analysis of Active Galactic Nuclei and Galaxies Using Virtual Observatory: Dependence on Virial Mass of Supermassive Black Hole”, by Komiya et al. is published in the Astrophysical Journal, vol.775, article id.43.

1. The Sloan Digital Sky Survey (SDSS) is one of the most ambitious and influential surveys in the history of astronomy. Over eight years of operations (SDSS-I, 2000-2005; SDSS-II, 2005-2008), it obtained deep, multi-color images covering more than a quarter of the sky and created 3-dimensional maps containing more than 930,000 galaxies and more than 120,000 quasars. Meanwhile, SDSS is continuing with the Third Sloan Digital Sky Survey (SDSS-III), a program of four new surveys using SDSS facilities. SDSS-III began observations in July 2008 and will continue operating and releasing data through 2014.

2. UKIDSS is the next generation near-infrared sky survey, the successor to 2MASS. UKIDSS began in May 2005 and will survey 7500 square degrees of the Northern sky, extending over both high and low Galactic latitudes. The depth is three magnitudes deeper than 2MASS. UKIDSS will be the true near-infrared counterpart to the Sloan survey, and will produce as well a panoramic clear atlas of the Galactic plane. The survey instrument is WFCAM on the UK Infrared Telescope (UKIRT) in Hawaii.