Planets and asteroids, red giants and brown dwarfs – there are all kinds of objects in our Universe. Debris disks are among them. These are belts consisting of countless dust particles and planetesimals, circling around one central star. “At least one fifth of stars are surrounded by dust belts like these,” Prof. Dr. Alexander Krivov from the Friedrich Schiller University Jena explains. “They are the remains of the formation of planets, in which the unused, building materials are collected,” the astrophysicist points out. Therefore debris disks are an important piece in the puzzle to be able to better understand the variety of planetary systems. 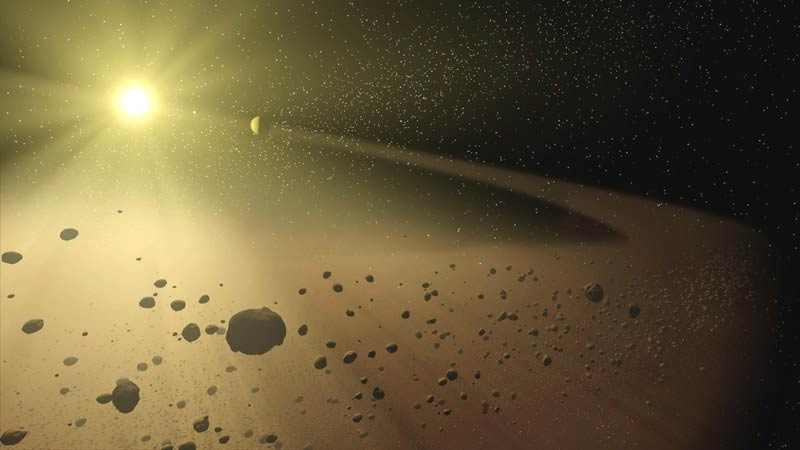 An artists impression of a debris disk. Image Credit: NASA/JPL-Caltech

For astronomers like Alexander Krivov debris disks are actually nothing new.  Our Sun is also orbited by such dust belts: the Asteroid Belt and the Kuiper Belt with Pluto being perhaps the most well-known object in it. However, the Jena astrophysicist, accompanied by an international team of scientists, has observed six stars similar to the Sun with extraordinary dust belts:

The newly discovered debris disks are not only bigger than the Kuiper Belt. Above all they are extremely cold. With a temperature of about minus 250 °C they are the coldest debris disks known so far. The scientists report on it in the science journal ‘The Astrophysical Journal‘, which is already online and will be available in a print version from 20 July. “We were surprised that such cold debris disks exist at all,” Alexander Krivov, the lead author of the new study, says. By way of comparison: The Kuiper Belt is about 70 °C degree warmer, some of the dust disks even reach room temperature.

The six debris disks are mysterious for yet another reason: They are lacking the characteristic dust which is always released when the rocks collide. “Small dust particles are much hotter than the temperatures observed by us,” Krivov says. According to this, the cold debris disks only consist of bigger but at the same time not-too-big rocks. The calculations of the scientists suggest that the radius of the particles lies between several millimeters and several kilometers maximum.

“If there were any bigger objects, the disks would be much more dynamic, the bodies would collide and thereby generate dust,” the Jena professor of astrophysics explains. The cold debris disks are admittedly a relic of its former planet factory, but the growth to the size of planets stopped early on – even before bodies the size of asteroids or even dwarf planets could develop.  “We don’t know why the development stopped,” Krivov says. “But the cold debris disks are proof that such belts can exist for over billions of years.”

The scientists came across the unusual debris disks with the help of the Herschel Space Observatory – the largest telescope that was ever launched into space. “Herschel was especially designed to detect cold objects, because it has measured the radiation in far infrared,” Prof. Krivov explains. In spite of its enormous effectiveness the observation of the cold debris disks was a demanding task even for Herschel.

Thus scientists cannot rule out the possibility that the supposed debris disks could actually be background galaxies which just happen to be behind the central star. “Our studies however show that there is a high likelihood we are mostly dealing with real disks,” Krivov states.  As planned, Herschel entered retirement in April. The scientists reckon that they will gain final certainty about their findings with the help of data by further instruments like the radio telescope ALMA in the Chilean Atacama Desert.