Observations with the Atacama Large Millimeter/submillimeter Array (ALMA) show that the most vigorous bursts of star formation in the cosmos took place much earlier than previously thought. The results are published in a set of papers to appear in the journal Nature today, 14 March 2013, and in the Astrophysical Journal. The research is the most recent example of the discoveries coming from the new international ALMA observatory, which celebrates its inauguration yesterday.

This montage combines data from ALMA with images from the NASA/ESA Hubble Space Telescope, for five distant galaxies. The ALMA images, represented in red, show the distant, background galaxies, being distorted by the gravitational lens effect produced by the galaxies in the foreground, depicted in the Hubble data in blue. The background galaxies appear warped into rings of light known as Einstein rings, which encircle the foreground galaxies. Image Credit: ALMA (ESO/NRAO/NAOJ), J. Vieira et al.

The most intense bursts of star birth are thought to have occurred in the early Universe, in massive, bright galaxies. These starburst galaxies convert vast reservoirs of cosmic gas and dust into new stars at a furious pace — many hundreds of times faster than in stately spiral galaxies like our own galaxy, the Milky Way. By looking far into space, at galaxies so distant that their light has taken many billions of years to reach us, astronomers can observe this busy period in the Universe’s youth.

“The more distant the galaxy, the further back in time one is looking, so by measuring their distances we can piece together a timeline of how vigorously the Universe was making new stars at different stages of its 13.7 billion year history,” said Joaquin Vieira (California Institute of Technology, USA), who led the team and is lead author of the paper in the journal Nature.

The international team of researchers first discovered these distant and enigmatic starburst galaxies with the US National Science Foundation’s 10-meter South Pole Telescope (SPT) and then used ALMA to zoom in on them to explore the stellar baby boom in the young Universe. They were surprised to find that many of these distant dusty star-forming galaxies are even further away than expected. This means that, on average, their bursts of star birth took place 12 billion years ago, when the Universe was just under 2 billion years old — a full billion years earlier than previously thought. 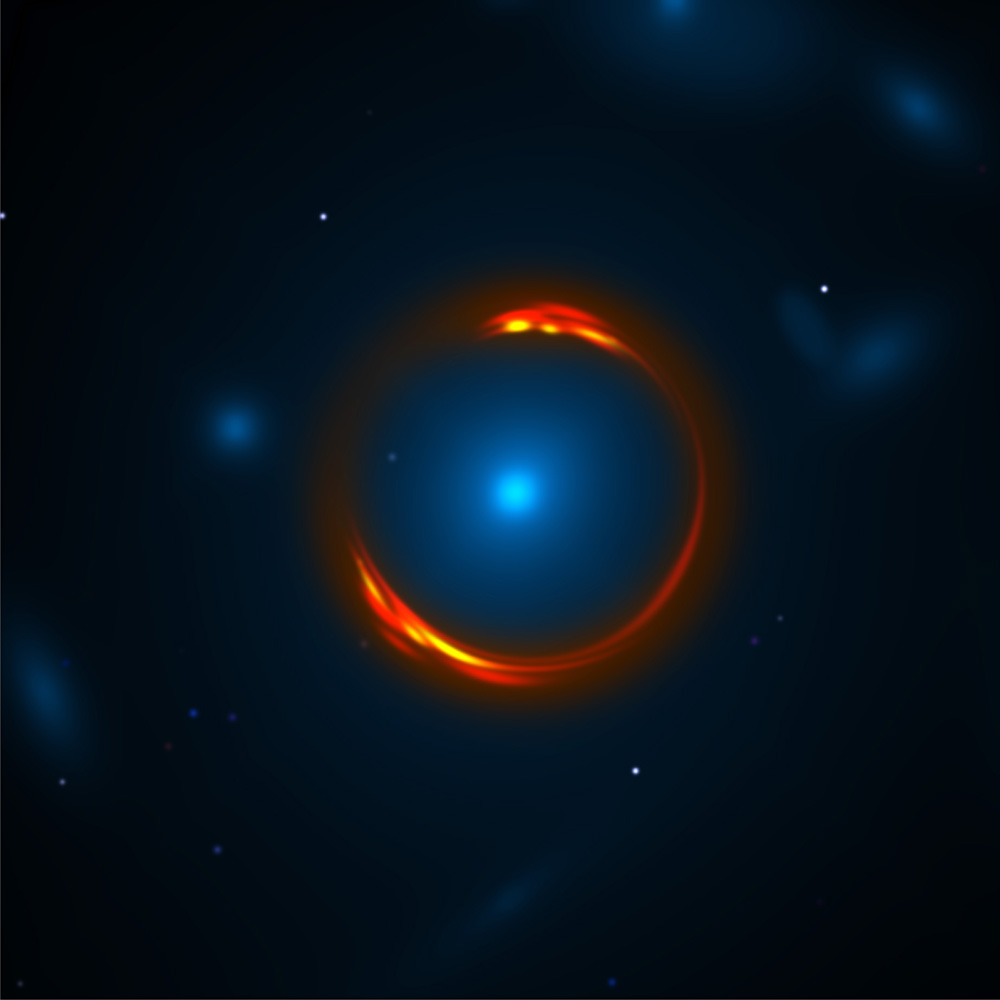 This is an artist’s impression of one of the SPT-discovered sources based on observations by ALMA and the Hubble Space Telescope (HST). The massive central galaxy (in blue, seen by HST) bends the light from a more distant galaxy that’s bright in submillimeter wavelengths, forming a ring-like image of the background galaxy, which is observed by ALMA (red). Image Credit: Y. Hezaveh

Two of these galaxies are the most distant of their kind ever seen — so distant that their light began its journey when the Universe was only one billion years old. What’s more, in one of these record-breakers, water is among the molecules detected, marking the most distant observations of water in the cosmos published to date.

The team used the unrivalled sensitivity of ALMA to capture light from 26 of these galaxies at wavelengths of around three millimeters.  Light at certain specific wavelengths can be produced by gas molecules in these galaxies, and the wavelengths are stretched by the expansion of the Universe over the billions of years that it takes the light to reach us. By measuring the stretched wavelengths, astronomers can calculate how long the light’s journey has taken, and place each galaxy at the right point in cosmic history.

“ALMA’s sensitivity and wide wavelength range mean we could make our measurements in just a few minutes per galaxy — about one hundred times faster than before,” said Axel Weiss (Max-Planck-Institut für Radioastronomie in Bonn, Germany), who led the work to measure the distances to the galaxies. “Previously, a measurement like this would have been a laborious process of combining data from both visible-light and radio telescopes.”

This schematic image represents how light from a distant galaxy is distorted by the gravitational effects of a nearer foreground galaxy, which acts like a lens and makes the distant source appear distorted, but brighter, forming characteristic rings of light, known as Einstein rings. An analysis of the distortion has revealed that some of the distant star-forming galaxies are as bright as 40 trillion Suns, and have been magnified by the gravitational lens by up to 22 times. Image Credit: ALMA (ESO/NRAO/NAOJ), L. Calçada (ESO), Y. Hezaveh et al.

In the majority of cases, the ALMA observations alone could pinpoint the distances, but for a few galaxies the team combined the ALMA data with measurements from other telescopes, including the Atacama Pathfinder Experiment (APEX) and ESO’s Very Large Telescope [1].

The astronomers were using only a partial array of 16 of ALMA’s full complement of 66 giant antennas, as the observatory was still under construction at an altitude of 5000 meters on the remote Chajnantor Plateau in the Chilean Andes. When complete, ALMA will be even more sensitive, and will be able to detect even fainter galaxies. For now, astronomers targeted the brighter ones. They took advantage of a helping hand from nature, too: using gravitational lensing, an effect predicted by Einstein’s general theory of relativity, where light from a distant galaxy is distorted by the gravitational influence of a nearer foreground galaxy, which acts like a lens and makes the distant source appear brighter.

To understand by precisely how much this gravitational lensing brightened the view of the galaxies, the team made sharper images of them using more ALMA observations at wavelengths of around 0.9 millimeters. “These beautiful pictures from ALMA show the background galaxies warped into multiple arcs of light known as Einstein rings, which encircle the foreground galaxies,” said Yashar Hezaveh (McGill University, Montreal, Canada), who led the study of the gravitational lensing. “We are using the massive amounts of dark matter surrounding galaxies half-way across the Universe as cosmic telescopes to make even more distant galaxies appear bigger and brighter.”

Analysis of the distortion reveals that some of the distant star-forming galaxies are as bright as 40 trillion (40 million million) Suns, and that gravitational lensing has magnified this by up to 22 times.

“Only a few gravitationally lensed galaxies have been found before at these submillimeter wavelengths, but now SPT and ALMA have uncovered dozens of them.” said Carlos De Breuck (ESO), a member of the team. “This kind of science was previously done mostly at visible-light wavelengths with the Hubble Space Telescope, but our results show that ALMA is a very powerful new player in the field.”

This schematic video represents how light from a distant galaxy is distorted by the gravitational effects of a nearer foreground galaxy, which acts like a lens and makes the distant source appear distorted, but brighter, forming characteristic rings of light, known as Einstein rings. An analysis of the distortion has revealed that some of the distant star-forming galaxies are as bright as 40 trillion Suns, and have been magnified by the gravitational lens by up to 22 times. Video Credit: ALMA (ESO/NRAO/NAOJ), L. Calçada (ESO), Y. Hezaveh et al.

“This is an great example of astronomers from around the world collaborating to make an amazing discovery with a state-of-the-art facility,” said team member Daniel Marrone (University of Arizona, USA). “This is just the beginning for ALMA and for the study of these starburst galaxies. Our next step is to study these objects in greater detail and figure out exactly how and why they are forming stars at such prodigious rates.”

[1] The additional observations were made by APEX, the VLT, the Australia Telescope Compact Array (ATCA) and the Submillimeter Array (SMA).