News by Subject » Astrophysics » How Accurate are the Models of Star- and Planet Formation?

Stars form when gravitational forces coalesce the gas and dust in interstellar clouds until the material forms clumps dense enough to become stars. Precisely how this happens, however, is still very uncertain. The infall of matter is probably not symmetric, it may be inhibited by the pressure of very hot radiation around the young stellar embryo, or perhaps it is constrained in other ways. 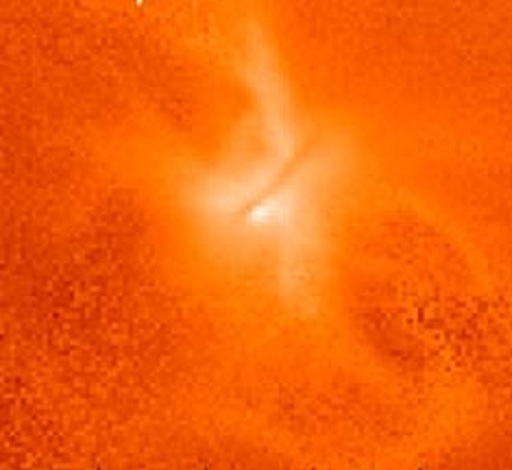 A simulated image of what a young star looks like in the far infrared. A dark disk is seen edge-on and outflow material is also apparent. A new paper compares models with these simulations to measure their accuracy.
Image Credit: Offner et al., 2012

These processes enable surrounding material to develop into disks around the stars, and it in turn can evolve into planets. The differences in the conditions are important to our understanding of the formation of our Solar System because planets like the Earth are built from just such material that does not make it into the star.

Observing these various processes directly is difficult. Young stars are embedded in obscuring dust, and moreover they are generally far enough away that the imaging ability of instruments is unable to distinguish a star from its disk or surrounding cloud except in a few cases. Instead of relying on pictures, astronomers measure the total energy emitted by the star and its environment across wavelengths from the optical through several decades of infrared into the submillimeter.

The so-called “spectral energy distribution (SED)” samples the stellar nursery’s emission at wavelengths where the bulk of its energy lies – in the optical from the star and in infrared bands from dust in the disk or surroundings, with each band highlighting different temperature material. A range of modern space telescopes including the Spitzer Space Telescope and the Herschel Space Observatory have been used to collect these data.

Astronomers use models to reconstruct from the measured SED the detailed physical processes underway. CfA astronomer Tom Robitaille (who recently left CfA) was one of the most successful people modeling young stellar objects, and his codes have been widely used for about six years. In the new issue of The Astrophysical Journal, he and CfA astronomer Stella Offner, together with three colleagues, ask the question: How accurate are the models?

To test them, they use a sophisticated simulation of star formation whose results they use to calculate SEDs which they compare with the models. Of course the simulations, too, make approximations and might be neglecting something important, but they provide an excellent verification for most features such as the importance of the viewing angle in determining the observed SED.

Their conclusion: Overall the models are very good at determining a young star’s evolutionary state, accretion rate, and stellar mass, but are less good in determining the properties of the disk or envelope. The characteristics of the dust are among the parameters that need to be refined in order to improve the modeling. Their work is continuing, and future research will make it possible to infer even more details of stellar evolution from observations of the spectral energy distribution.